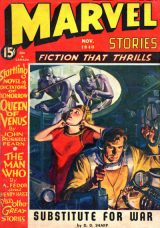 Pulps and comics are kissing cousins. Not only have comics plundered the pulps for heroes, stories, and franchises, in many cases, comics and pulps were owned by the same publishers. For instance, Street & Smith’s Chelsea House imprint ran comics of most of their pulp books. But Marvel holds special ties to science fiction. Not only does The House of Ideas continue to provide opportunities for science fiction writers to work in comics, it set the stage for the Campbelline Revolution through Marvel Science Stories, a nine issue pulp that ran between 1938 and 1941.

Like Marvel Comics’s predecessor, Timely Comics, Marvel Science Stories was part of the Red Circle imprint, published by Martin Goodman, who would later become a cousin by marriage to Stan Lee. Red Circle books covered the gamut of westerns, detective stories, weird menace, and adventures, but they appealed to a baser instinct than most of their competition. That’s right, Red Circle dealt with the “spicies”, those salacious stories of sin and sadism that seem so utterly quaint in today’s age of Game of Thrones.

Initially, Erisman seems to have taken note of the fans’ requests but by 1939, Marvel’s sales were starting to drop and, under pressure from Martin Goodman, Erisman stepped up the sex content of the magazine. With the sixth issue dated December 1939, the ‘science’ was dropped and the title changed to Marvel Tales. The covers became more like those of the other weird-menace pulps, with girls being lowered into all manner of torture devices, and the horror writers took over. Jack Williamson recalled how Erisman got him to include some spicy passages in his previously unsold story “The River of Terror” which was then published under the title “Mistress of Machine-Age Madness” (May 1940). Williamson feared having his name linked with it, so it appeared under the house name Nils O. Sonderlund. “It looks more insipid that daring now,” Williamson later recalled, “but  didn’t want my name on it then. For most of us in those days science fiction had to be pure as snow.”

Williamson was not the only one in science fiction to despise Marvel Science Stories. Fandom’s impressions were generally negative, if not outright hostile:

“I was just about to write you a letter of complete congratulations when my eyes fell upon Kuttner’s “The Time Trap”. All I can say is: PLEASE, in the future, dislodge such trash from your magazine.”–William Hamling

“For some half a dozen issues or so, a magazine I won’t name” published “spicy” stories about “the hot passion of alien monsters for Earthwomen. Clothes were always getting ripped off and breasts were described in a variety of elliptical phrases” for its “few readers” before “the magazine died a deserved death” — Isaac Asimov

Some of this is just fannish snobbery, as Williamson explained. And Marvel’s sister magazines “Dynamic Science Stories”, “Uncanny Stories”, and more fell along the same pattern, with similar disdain for the quality. “Historians identify only three stories of quality: Nelson S. Bond’s “The Message from the Void” (published under the pseudonym “Hubert Mavity”); L. Sprague de Camp’s “Ananias”; and Manly Wade Wellman’s “Insight”.”

So, if it was not for the publication of Marvel Science Stories by a smut peddler of its day, science fiction would not have generated the attention and the dollars from publishers. And the genre would have continued to stagnate in the mess caused by Hugo the Rat’s predations. After all, as Gus Grissom said in The Right Stuff, “No bucks, no Buck Rogers.”