Valerian and Laureline: Ambassador of the Shadows 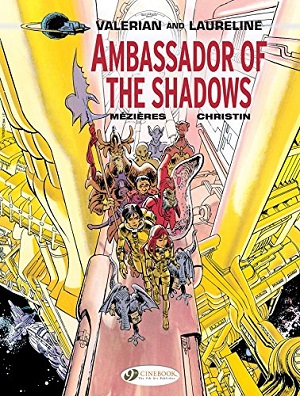 In the 1960s, while working in America, writer Pierre Christin and illustrator Jean-Claude Mézières met to collaborate on their next bande dessinée (BD) comic serial. Both men originally wanted to draw a Western, but the market in France had already been saturated with such stories. Instead, they turned to their other great American literary love, science fiction, a genre France once dominated but had abandoned in the despair after World War One. Drawing upon the works of such greats as Poul Anderson. Isaac Asimov, and Jack Vance, Christin and Mézières created Valerian and Laureline, a landmark time-traveling space opera that has influenced comics such as Métal Hurlant and Heavy Metal, and also films and television, including Star Wars, The Fifth Element, and Neon Genesis Evangelion. Throughout the series’ nearly fifty year run, the adventures of Valerian and Laureline were previously only available in English through a scattered handful of issues, starting with Ambassador of the Shadows in the 1981 run of Heavy Metal magazine. Fortunately, French publisher Dargaud has teamed with Cinebook to release the entire twenty-one volume series in print and ebook formats. With the upcoming movie Valerian and the City of a Thousand Planets set to reintroduce the world to Valerian and Laureline with a plot based in part on Ambassador of the Shadows, let’s dive into the original.

In the twenty-eight century, Valerian and Laureline are spatio-temporal agents for Galaxity, the seat of the Terran Galactic Empire. A citizen of Galaxity, Valerian is a good-natured hero that resembles Conan in a spacesuit while acting like a boy-scout’s hero. Laureline, however, hails from 11th century France and is as fiery as her red hair. Where Valerian relies on traditional action and heroics to solve cases, Laureline relies on her charm and guile. Their early adventures through time and space focused on Valerian as the hero with Laureline as his pretty sidekick. Over time, Laureline grows into an equal partner to Valerian. Filmmaker Luc Besson describes their relationship as “It’s a boy and a girl. They have fun, they love each other, but they don’t want to say it. He’s a puppy — he’s watching all the girls, and she’s very old fashioned. For her, you fall in love with one man, you get married, you have kids. Just like that, it’s today, but with aliens and fighting.” 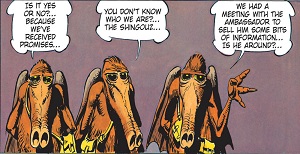 In Ambassador of the Shadows, Valerian and Laureline escort Galaxity’s ambassador to the Point Central mega-space station ahead of the Earth’s fleet. It is humanity’s turn to lead the council, and the ambassador plans to make the most of the opportunity. Soon after they land, aliens attack, kidnapping the ambassador and killing the reception party with streams of thickening ooze. Saved by his spacesuit’s helmet, Valerian takes off in pursuit of the aliens. Minutes later, Laureline revives and frees herself from the trap. A trio of alien shingouz approach her. For the right price, the alien information brokers will tell Laureline where Earth’s secret allies live on the station. Fortunately, Laureline has her wits, her charm, and the Grumpy Transmuter of Bluxte, a pet that can reproduce pearls, coins, pills, or anything else she might need to trade for favors, as she moves from backroom deal to backroom deal in pursuit of her Valerian. And the ambassador, if she absolutely must. 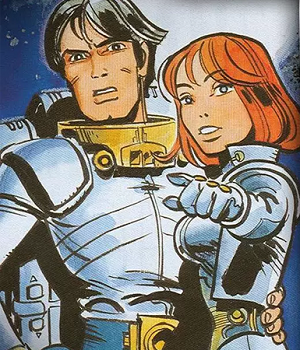 This is Laureline’s book, and the point in the series where she takes over the role of main character from Valerian. As soon as Valerian is whisked away atop the kidnappers’ fleeing ship, the story never leaves her again. Laureline might well be a grandmother to today’s Pixie-fu Action Girl. Certainly, she originates from the same intersection of feminism and Venus worship that birthed the Action Girl. But where the Action Girl seeks to eliminate the differences between the sexes by proving she is better than men at fighting, Laureline celebrates her differences from Valerian. Laureline plays to her feminine strengths, wit, guile, charm, and sex appeal, leaving physical confrontation to Valerian. While Ambassador of the Shadows praises Laureline’s feminine cunning at the expense of Valerian’s impulse to action, her story is the traditional tale of a wife braving strange lands in search of her beloved, complete with political intrigue and a splash of temptation. But where most women must rely on a guide to navigate the alien cultures, Laureline is able to do so on her own, which is fortunate as her guide is venal and cowardly. At the end, she proves to be key in unraveling the political mess that took away her Valerian. At first glance, Laureline’s independence keeps her from making the same mistake that Valerian’s insistence on duty and obedience to orders led him to, but she is just as constrained as Valerian, forbidden by her superiors to take matters in her own hands. Unfortunately, as Laureline ascends to main character status, Valerian begins his multiple book struggle with lawful stupidity. Fortunately, Christin and Mézières recognized that Valerian was slipping into parody and reined in the Laureline worship soon after. 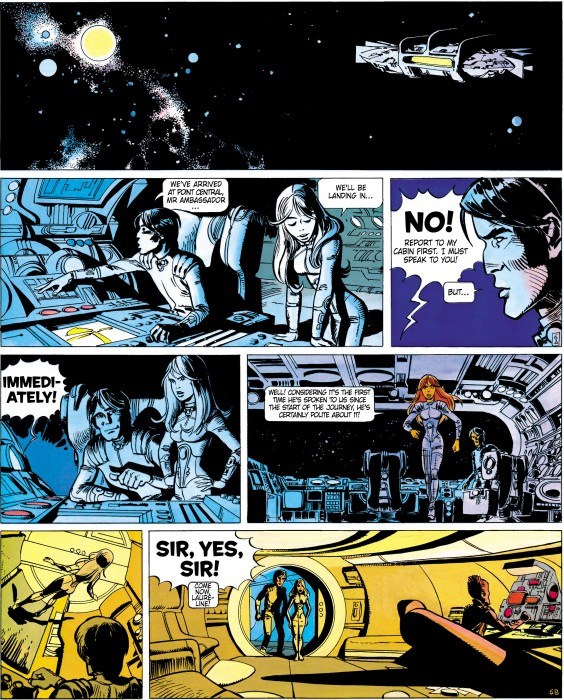 The art style is fairly realistic, although some of the aliens and the ambassador’s toadies have more comedic designs. For a reader used to the extravagances of manga, such restraint is refreshing. Laureline’s poses run towards subtle fanservice, yet she is also the most expressive character, as Mézières catches Laureline’s every moue, pout, flounce, and cringe with his pen. This allows him to capture the repulsiveness of the mollusk-based biomachinery that Laureline must use without resorting to detailed grotesquery. Most of the other aliens on the mega-station would be at home in the Mos Eisley cantina. The palette is limited to red, yellow, blue, and black and their combinations, using shading and contrast for effect. Look for warmer colors to frame panels of conflict and tension, and colder hues for more peaceful times.

Ambassador of the Shadows serves well as an introduction to the universe of Valerian and Laureline, and to Laureline herself. But with Valerian out of the picture for much of this slim volume, readers looking to fully appreciate the relationship between Valerian and Laureline, as well as the dance on contrasts between them, will need to pick up additional volumes. Fortunately, I’ve got Ghosts of Inverloch and Wrath of Hypsis waiting in the wings…