Valley of the Assassins 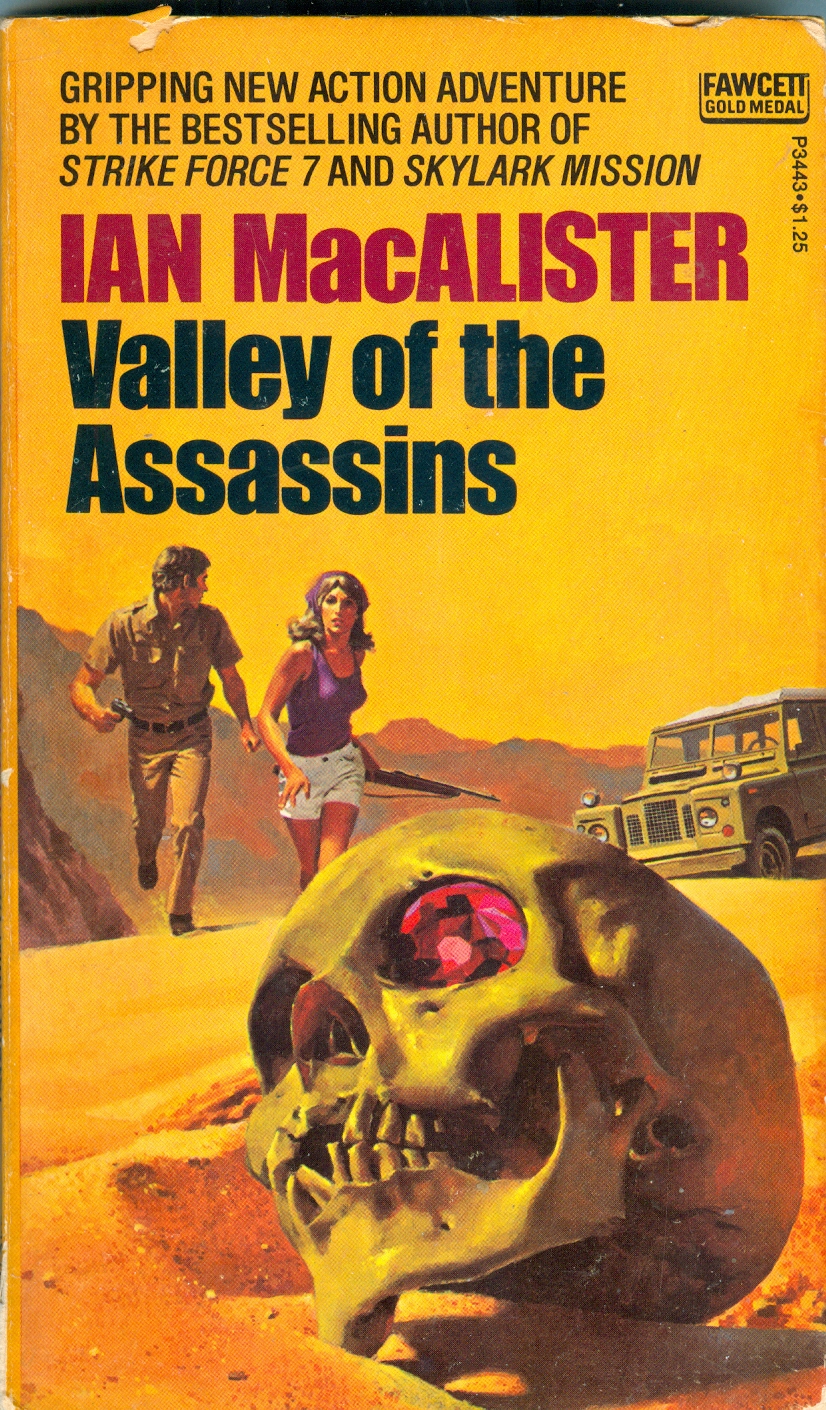 Last week, I looked at Marvin Albert as “Ian MacAlister’s” Strike Force 7. Three weeks ago, I had some good luck at the library book sale. I picked up nine James Bond novels by Ian Fleming, Signet/New American Library editions from the 60s and early 70s. Found a nice Modesty Blaise paperback with Robert McGinnis cover. And I picked up “Ian MacAlister’s” Valley of the Assassins.

I believe this was the last of the four paperbacks by Marvin Albert as by MacAlister from Fawcett Gold Medal. Valley of the Assassins was published January 1976. The Bay City Roller’s “Saturday Night” was a very big song on the radio at that time.

The novel starts in the Persian Gulf with Eric Larson picking up a survivor from a shipwreck. He reluctantly takes him to Iran instead of Basra where Larson is headed. Larson does arrive in Basra where things heat up. A fanatic attempts to kill him on his boat. He is interrogated by the Iraqi secret police, and a woman from his past shows up. He had helped Darra, a Kurdish rebel fighting the Iraqis escape across the border a few years back.

A map secreted away on Larson’s boat is the cause of the attempted assassination. There is a hair breadth escape into Iran. Larson finds the man he saved who is also a Kurd and an expert on the medieval sect of the Assassins.

Before Hulagu Khan’s forces destroyed the Assassins in their stronghold of Alamut, some smuggled out the body of their founder Hasan-i-Sabah in a bejeweled coffin filled with gems. The map shows the way to find the treasure once in the general vicinity. Larson travels to Alamut to figure out just where in the world Sabah’s body was secreted. Larson also discovers the Assassins are alive and well in modern times.

The next part of the novel starts in Oman with Larson, Darra, an Iraqi secret police captain, an unscrupulous Czech arms dealer, and a few others in tow. They are for the Empty Quarter in Arabia. There is a problem as there has been a leak in the Kurdish organization to the Assassins.

The last chapter is superb. Albert really knew how to pace his novels. I have grown to appreciate the paperback original writers of this period.

Just like Strike Force 7, Valley of the Assassins would make a great action adventure movie. It is a sort of Indiana Jones type adventure with assault rifles.

I only have Driscoll’s Diamonds left to track down and read. Luckily, some consider that their favorite Albert as MacAlister novel.