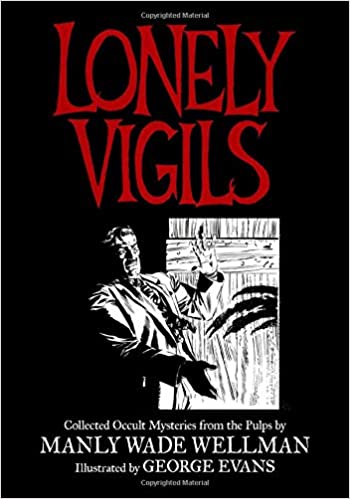 Professor Nathan Enderby has a problem. An aging socialite has a mind to drag him to the altar, regardless of his wishes. But when she discovers a book bound in human parchment among his library, things quickly get worse. While it might not be trendy among social circles to believe in witches, she does steal the book, with a mind to sketch out the ritual inside with lipstick. She did not intend to call up the demon now chasing her, but the road to Hell is paved with good intentions, and it can be travelled in both directions. Now the professor of esoterica must get rid of two unwelcome guests if he is to return to his quiet life of study.

Enderby’s struggle to rescue an inadvertent witch from her own blunderings was supposed to be the first in a series written by Manly Wade Wellman for Strange Stories. The good professor only appeared once, in 1939, in the middle of the time when Wellman was writing his Judge Pursuivant stories for Weird Tales. He also represents a stage along the path from Jules de Grandin-style occult detectives towards the more country and hands-on John the Balladeer. The understanding and use of various obscure books might remain, but the social castes and the action are constantly in flux. To a genteel professor, the things that go bump in the night are abstract, passionless, and distant, but to a man walking the mountains at night, they are more immediate and harrowing concerns.

Perhaps that is why Enderby only appeared once during the pulps. He is too passionless, too in control, as he dispatches the demonic familiar stalking the socialite. His encounter is all esoteric fact, no drama, and no stakes to the clash. Later Wellman heroes such as John Thunstone and John the Balladeer might display the same knowledge, but they are not as assured of success in their clashes with the Devil and his forces. Even in the earlier “Golgotha Dancers”, the encounter with the things from the painting was a close-run thing, full of drama and close calls. But here, in “Vigil”, it is a bloodless puzzle, with the only spark coming when Enderby turns out his visitor with a warning to wash off her makeup, eat in silence, and then leave.

Those readers expecting the excellence in esoterica and imaginative creatures that Wellman is known for will not be disappointed. But those expecting that all-too-human touch and romantic inclinations of Wellman’s better known works will be. Pick up “Vigil” only if it is part of a collection with Pursuivant and Thunstone, but make sure not to miss their stories.