WARGAME WEDNESDAY: Avalon Hill’s The Battle of the Bulge (1981) – Part I 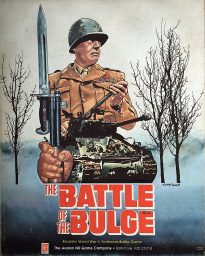 I’ve spent the last few months playing Avalon Hill’s The Battle of the Bulge, probably devoting more table-time to it than virtually any other game in recent memory. It’s one thing to want to play a hex and chit game twice, once to get a feel for each side, but really says something when you want to play it over and over, exploring different possibilities and different outcomes.

My dad and I played Battle of the Bulge four times, twice as each side, and if my dad hadn’t started to burn out on it, I would’ve been more than happy to have played it a fifth time.

Though rather lengthy, featuring AM & PM turns for each day of the operation, BotB plays very quickly, and you can easily knock out 5 to 8 turns in a single evening.

BotB is played at the Regiment/Brigade level with a detailed order of battle, and it even has some special rules for the 150th Pz Brigade (Operation Greif) and the Einheit Stielau commandos.

The game does take weather into account through a fairly simplified (and fixed) system of “is the ground frozen or mud?”, air mission allocations (historical weather is noted on the turn chart, as are fixed number of air missions for turns with weather that allows them), and a fixed period of “strategic bombing” rules in effect during the clear-weather turns.

The German objectives seem fairly straight-forward, but there are a number of ways a German player can win the game. I’d need to play it a few more times to get a better analysis, but operationally, the Germans have to make the big all-or-nothing push early to effectively achieve a strategic victory before the mid-game (Patton & Montgomery’s arrival followed by the Strategic Bombing and Allied Air Superiority). They need to be aware of their capability of fulfilling victory conditions and, if they can’t meet them, need to dial back accordingly at the precise moment or be squashed while their lines are stretched thin.

I’d need to play through a few more times to see how the Germans fare consistently with the imposition of those rules, but that third rule seemed to shape the first game’s outcome so unfavorably for the Germans (even though we’d failed to notice the one footnote where it’s mentioned that Forts provide a die-roll modifier) that we pitched it for the subsequent series.

In the following series of posts, I’ll be breaking down each of our play-throughs with the results of our 4 games of Battle of the Bulge.