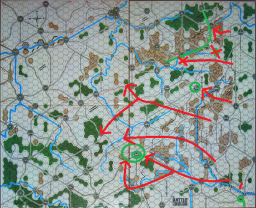 This play-through we used the advanced game with the following variations and special rules:

The Germans had a weak turn one start and failed to make significant progress, due to an inability to make a break-out on the first turn. Allies managed to hold key strategic and tactical positions long enough to seriously bog down German progress along Elsenborn, delaying key reinforcements.

After I’d managed to demolish the supply dumps at Stavelot and Spa, and following an entire division worth of panzers being eliminated south of Malmedy (poor troop placement, an attack at mediocre odds, and an unlucky roll meant the armor had no valid retreat paths, as they got trapped between ZOCs and a forest hex), my dad conceded.

I think in this play-through, and to a lesser degree the subsequent, my Dad failed to fully appreciate the need to only attack when a)astronomical odds or b)envelopment can be achieved. Anything less than 3:1 in a straight-up fight is pointless, unless you’re trying to buy time for additional troops to surround an enemy.