This playthru we used the following:

The Germans fared much better this game. Unfreezing the I & II SS divisions of the 6th Pz Army gave the Germans the needed power to make early progress before Allied reinforcements and airpower put them on the defense. Germans made better than historical progress over Elsenborn ridge, and even captured one of the supply dumps. Westward advance of the 5th Pz Army was roughly on par with historical outcome. I put the 101 & 82 Airborne reinforcements to good use stalling and bogging down progress in the west. Dad probably spread his units of the LVIII & XLVII Pz too thin too early, but did eventually manage to seize Bastogne after prolonged siege. Patton’s forces from the south may have been squandered in a series of daring attacks deep into the German rear. By the end, only one Brigade was left holding Clerf, but the havoc being wreaked on supply lines forced two and a half divisions worth of armor to turn back east and put out fires. Furthest west German forces (who didn’t make it further than the historical 25 Dec progress line), were in full withdrawal about the time that Montgomery arrived to fortify the Muse. With no solidified northern flank, the Germans were beaten back by troops from the 9th Army making some dangerous counter-attacks, jeopardizing German supplies, and constantly forcing the German advance to double back.

I played dangerous, rather than smart, as the Allies, often striking deep blows through any openings the Germans left. It cost me a lot of troops, often losing entire divisions, but forcing several Panzer groups to go rushing back to retake St. Vith made it interesting. This may have been closer than it should’ve been; because the Germans scored a lot of points on units eliminated. The game ended with the allies winning by 5 points. 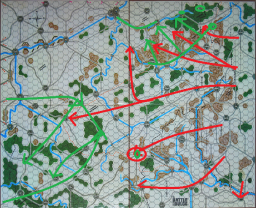 In the first major portion of the game, you can see that the Germans did better in the north, forcing the Americans back across the ridge-line. The west-bound forces met the 101 & 82, who created delays while avoiding pitched fights. 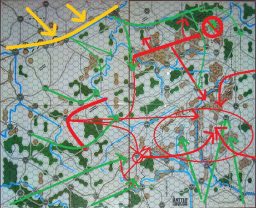 When Patton’s southern forces arrived, they punched deep into the German rear, but were ultimately encircled. Of course this also meant that any of the offensive “oomph” of the German strike was lost as multiple armor divisions had to be diverted. This gave additional forces in the south and west chances to push back. Additionally, any openings I could find, I exploited.