This playthrough we used the following rules:

Thinking I’d learned from my dad’s mistakes as the German player and seeing what the Allies could do in certain situations, I made an all-out go for the Meuse. While I had a strong opening in the center and the south, I largely neglected the northern flank. My reasoning was that the Panzer needed to go West, not North, and the ridge was crappy tank-fighting terrain anyway. Instead, I attempted to solidify my southern flank, but despite my deep penetration towards the Meuse, I found myself overextended. My Panzers DID reach the Meuse, but failing to note that exited units cancel British reinforcements, the Brits showed up and put a huge kibosh on any strategic victory. A few troops managed to get a foothold in Liege, but the arrival of Montgomery and the Ninth Army scattered and trapped my out-of-supply panzers who’d failed to liberate the supplies near Spa before they could be dumped. Combined with the upward pressure from the Third Army, I realized I’d fail to even contend for a Bastogne victory.

So, despite a fantastic start, I made a number of mistakes; a big one was leaving too many troops to cover the arrival of the 101-I was squatting in cities I’d never be able to hold for points for victory conditions I’d never be able to achieve. As those troops were picked off, I simply ran out of units. I lost all offensive capability on the verge of a victory and right before massive allied reinforcements arrived. 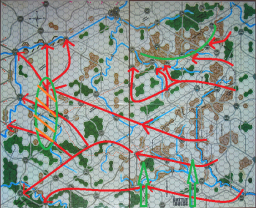 At a glance, it looks like I’d swept the board here. It did get me a little cocky when my panzer reached the Meuse. Of course, I was also stretched thin, so even though I overran the 82nd and 101st, I left my underbelly open to Patton, whose troops could cut those off who had attempted to secure those tertiary objectives in the southwest. Additionally, I’d failed to make any progress on Elsenborn ridge. Unable to seize the supplies near Spa and Stavelot, once strategic bombing resumed, my troops were scattered, easy to cut off, and lost all offensive initiative. 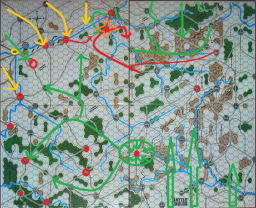 My hesitancy to cross the Meuse with my panzer meant that the British reinforcements were not delayed. Also, I didn’t realize that 2 brits would be canceled for every unit exited. Soon, I was overrun at the river, desperately trying to hold onto a few key cities, but unable to even secure all of those cities needed to gain a Meuse victory. As you can see, I’d forced my way into Liege, but could not relieve the troops there, and at half movement, I just could not get my tanks out of disadvantageous positions.

Though I’d massed my artillery for one final push on Liege, I was too outnumbered to make headway against the citadel, and attempts to open up the supply lines units got trapped behind enemy lines. Scattered units in the south west were isolated and systematically eliminated while two panzer divisions were lost just south of Liege as the artillery brigades became trapped on the wrong side of a river.