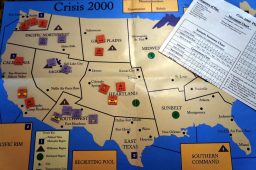 The inclusion of a complete wargame has long been a staple of magazines dedicated to the tabletop wargame hobby.   The tangible difficulties are minimal, as the physical requirements are limited to a foldable paper map and a few counters, and the marketing value obvious.  At the cost of a (relatively) expensive sheet of counters, a publisher can entice potential buyers with not just reviews, advice, and strategic guidance, but with yet another game to pass an afternoon.  GameFix  was one such magazine, a short lived small press periodical providing independent coverage of the wargame industry, it boasted of a complete wargame in every issue. The second issue included Crisis 2000, a wargame set within a near-future fourth generation war for control of the continental USA.  Several of the games, including this one, were later made available as titles separate from the magazine.

Written by Joe Miranda and originally published in the November 1994 issue of GameFix, Crisis: 2000 is a short and fast paced simulation of conflicts between Government and Rebel forces. The game includes seven scenarios representing different potential conflicts for control of the USA.  In one, a military coup attempts to seize control from the civilian government. In another, a UN peacekeeping force is dispatched to halt the internationally criminalized tobacco, firearm, and rogue computer industries.  In another, the Constitution is outlawed as the government clamps down on crime, local secession movements, and computer hackers.  Although printed more than twenty years ago, it would be trivial to reskin a few of these scenarios to fit potentially realistic 21st century conflicts. 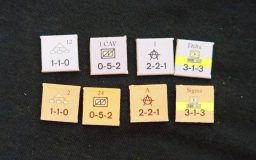 As with most traditional wargames, play in Crisis: 2000 consists of maneuvering military elements into position and slugging it out by comparing troop strengths, rolling a die, and consulting an Armed Conflict Table. Crisis: 2000 breaks from the mold by including a second layer of conflict that is just as important as armed conflict, Data Conflict.  Unit counters in Crisis: 2000 are given ratings in both Armed and Data conflicts, which range from 1 to 5, resulting in very different capabilities for each counter.  For example, the traditional armed forces cannot engage in Data conflict, while hacker groups are weak when they engage in Armed Conflict. This also allows for units that straddle the line, such as Local Infrastructure, which cannot move, is weak in Armed Conflict and fairly strong in Data Conflict.  To complicate matters even further, the hacker units are Clandestine, meaning that they can only be targeted in Armed Conflict by Law Enforcement units.

A second type of counter, the Crisis Marker, is essentially used as a wild card.  They are assigned at the start of the game based on the scenario, and are held by the player until such time as the player decides to use them.  The Unit Counters are position based, they live on the map.  The Crisis Markers are event based, they are one-time use items that can help direct the course of conflict.  Examples include Detention Camps, the introduction of Mind Drugs, the founding of a Neo Religion. Some can be played to effect only Armed Conflict, some only Data Conflict, and some either.  Crisis Markers also can have variable effects depending on whether they are played in metro areas, rural areas or one of the extra-national supporting areas.

Used Crisis Markers get recycled and replaced through the course of the game, which allows for a few Jokers in the pile.  A few of the Crisis Markers are actually one-time events that can drastically change the course of the game.  The Bill of Rights immediately halts all Armed Conflict for the remainder of the turn.  Foreign Intervention sees the player that drew the marker gain a number of new military units at the cost of that many Crisis Markers – he gains new forces at the cost of a loss of face as his reliance on outside helps signals weakness.  The Videotaped Atrocity allows the Rebel to recruit two new Insurgent Units but does nothing for the Government side.

As a student of Fourth Generation War, you may be thinking, “Hold on, you said that this game includes a shoot-‘em-up phase, but Fourth Generation War is all about the moral level of war.  How do you square that?”  Each counter can represent either a Government or a Rebel unit; the two sides are identical except for the background color, which designates who currently controls that unit.  Yes, that Insurgent Group may be controlled by the Rebel player now, but effective use of Data Conflict can flip the counter over, giving control to the Government.  The how and why of this process is abstracted by a die roll in the same way that a pitched tank battle is abstracted by a die roll.  Maybe the local commander won in a straight up fight, or maybe he won by ambushing the opponent; the result matters more than the process.  In the Data Conflict mentioned before, maybe the Government news channel ran a false story about six cops murdering a suspect in the back of a police van and successfully manipulated a nascent insurgent group to do their bidding.  The exact process doesn’t matter so much as the effect of turning control of the counter over to the other player.

The addition of the Data Conflict phase of the game turns this from a Second or Third Generation wargame over control of a region into a Fourth Generation wargame for control over the moral level of the war.  If you can control the data, you can control the armaments.   The flipside is also true, though, that the use of armaments can be used to destroy or control data.  If it sounds fluid and complicated, it should – welcome to Fourth Generation War.

The two different types of conflict, and the inclusion of Crisis Markers to influence those two kinds of conflict, make this a very fluid and fast paced game.  The map board and general victory conditions – at its core, war is still a fight for control over a geographic area and the resources within it – allow for tactical and strategic thinking, but the ability to “Turn” enemy units to your side and the ability to hold and play Crisis Markers force you to constantly react to your opponents plans.

This is not a terribly deep or involved wargame, the rules are just eight pages long, and this allows for several games in an evening.  Despite that, it is definitely a fun game, the shock of seeing your opponent summon forces in your rear areas and then recruit your best units to his team is offset by your knowing you can do the same to him next turn.

It is also well worth a look given that it is one of the few wargames produces that deliberately simulates the interaction between armed conflict, the moral level of war, and the ability for non-state actors to manipulate events and military action.  Among those rare few that attempt this feat, it is of the even rarer number that succeeds in a fast, playable, and fun game.