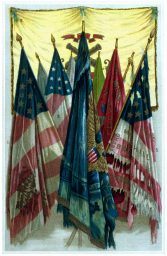 While I was enjoying the holidays here in the States over the last month, I was reminded how a “holy day” can have an effect on people’s moods: More thank-yous, more strangers holding doors, more patience, less eagerness to jump on small issues. Naturally this contrasts with the “normal” behavior we do witness—no matter the spirit, we still are who we are. The whole mood reminded me how often in Wargaming I have seen overly-simplistic systems of morale or command implemented: Besides being decidedly uncharacteristic for these games which so often hustle down even small details, it grieves me that so many students of war are denied this deep and pivotal piece of the experience of a battle commander.

Nearly every morale system I have seen simulates a group of soldiers retreating or being run down by their opponents when beaten in close combat, but how many systems capture a group of pursuers going too far after their retreating foes and losing their commander the battle in their excitement? On the grander scale, how many systems capture the surprise of the Tet Offensive or the Russian Christmas Battles in Riga during The Great War? How many adequately portray the respect soldiers have for their opponents or the effect of ongoing clashes in a war, like occurred in the various Christmas Truces, or the ferocity and fear of the island hopping warfare in the WWII Pacific theatre? What about the difference between overconfident armies like the battle of Bull Run/Manassas Junction in the American Civil War or two fearful armies like Li Yuan against the Turks in Jinyang? What about a totally despairing army as versus the desperation of Oda Nobunaga’s victory at Okehazama?

Sometimes hatred will be allowed a mechanical effect, like in the Warhammer Fantasy tabletop where models reroll dice against their hated foes, but what about the heartache witnessed in the War Between the States where soldiers would load their rifles and pretend to fire, loading again and again but unwilling to kill their countrymen? What about the anticipation felt by soldiers laying an ambush versus the relaxed discipline of marching long-distance, or the stress of the hedgerow fighting after D-Day in Europe where an opponent could be lining up a shot at any moment at close range? What’s more, what about insubordinate or overeager subcommanders? What about the mass desertions of Napoleon’s Russian campaign or the fragging of officers and drug use that occurred in America’s war in Vietnam?

Overly cerebral Wargames don’t prepare commanders for the realities of command in a world where the troops being commanded are not robots. Sometimes undisciplined or aggressive troops might be modeled as always running forward towards the enemy or something similar, but where is the complex modeling for the tremendous human (or alien/fantastic beast/whatever) psyche? What about a decrease in accuracy if the command unit is gone, rather than units fleeing outright? What if some units responded differently to casualties, fighting more fiercely for their wounded, dead, or dying friends then before? We spend 20 pages of the rulebook fleshing out rules for terrain, but only a few for the landscape of the soldiery’s minds!

What can we do with a soldier to make morale more interesting than either behaving normally or ‘fleeing’ and being taken off of the board, what can we put in between? We could have a list or chart of morale effects which might trigger or cycle in and out based on events like a squad leader dying, an enemy claiming an objective, being beaten in close combat, taking heavy casualties or damage, or the army/unit’s command squad being destroyed. Let’s presume the below list as one example:

The above is not particularly balanced or well-thought out, but the idea of the list above opens up a broad array of options especially in historical games; now units can have extra layers of special effects which interact with morale: You upgrade your recon infantry and they get Berzerk on their first turn, you upgrade your mainline unit and it treats “Unaffected” as “Emboldened”, veteran versions of units get to add 1 to all rolls–perhaps the chart is even in addition to and not a replacement of leadership-score systems. There are so many different approaches to the problem, but mostly I see designers get caught up in the drudgery of weaponry statistics instead of the mechanics of the ones wielding the weapons.
Morale can be a complex and curious study, but the finest commanders and the most influential turnings of the world have always made use of it: Alexander the Great charged the fearful troops at the Battle of Issus even after the terror stratagems of Darius III beforehand, Napoleon converted the aristocratic troops to his side after escaping from Elba, the soldiers of the Crusades–both Mohommedan and Christian–rose to the banners because of ardent religious fervor, World War II has been so iconically painted as good versus evil that its leaders are still held up as rallying symbols; the poet Milton claims that Satan himself first reinforced the morale of his soldiers after falling into Hell!
What are some interesting ways we can spice up the next generation of Wargames, or homebrew excellence for our private games? What are some other pain points you have seen on the subject? The best games are yet to be made…