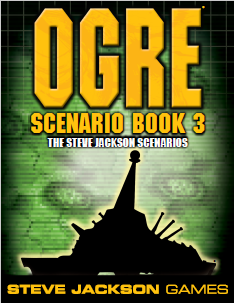 Nine scenarios for Ogre: Designer’s Edition– most of which can also be played with Ogre Sixth Edition and Ogre Reinforcements— and all of them by the game’s original designer: Steve Jackson!!!

Note that I received this in PDF format via email as a Kickstarter reward. (Yeah, this is a stretch goal bonus promise that I had completely forgotten about.) I don’t see it available on Warehouse 23, but keep a lookout for it!