The Weird Western “sub-genre” is an odd classification, because one of the hallmarks of Western novels, stories, comics and movies is their naturally occurring internal morality, often defined (often obliquely) as a Code – most famously, the “Code of the West.” This code is not rooted in the natural world, but is intrinsically supernatural. For example, a man who dies for honor is doing so with a firm belief in an Afterlife: one in which such “honor” will continue on as a ghostly legacy, possibly even a legend.

Of course, American Western pulps are naturally full of legends, lore, mythology and occult beliefs and motivation. Heck, even the concept of the “Outlaw” is one in which the Spirit of the West holds special court: the outlaw is different from a criminal. The spirit of the law may even be on the outlaws side in some stories, while the letter of the law condemns him. This is why so many confederate veterans in regular Westerns are portrayed as heroic “outlaws” in the books.

Thus, the step from regular Western to Weird Western is subtle enough.

And it starts with a flintlock-slinging English Puritan in 17th-century Africa.

Robert E. Howard’s Solomon Kane stories have many of the basic elements of a Weird Western, and they are a bit more iconic that Howard’s actual Weird Westerns, like The Valley of the Lost. Another great Howard story that borders on the Weird West is his Southern Gothic horror story “Pigeons from Hell”. It features an outlaw hero, a sympathetic sheriff and axe-wielding zombies.

Some of the pulps got much crazier with blending elements of horror, science-fiction or fantasy with Western tale. 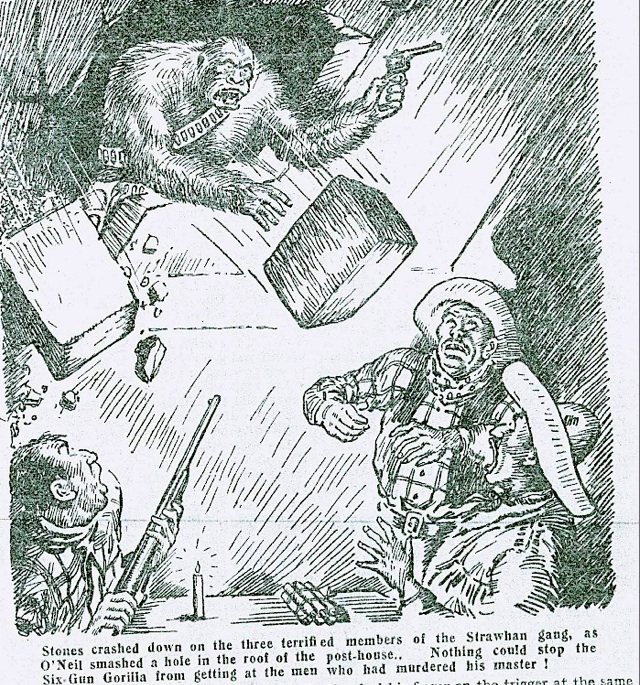 In just a bit of a twist on the classic Western revenge yarn, Six-gun Gorilla gets the drop on his owner’s murderers.

Jonah Hex appeared originally in Weird West comics before getting his own eponymous book, but people forget that despite his horrific visage, later time travels and anachronistic superhero team-ups, the original run of Jonah Hex stories were pure Westerns. In most of the early stories, the only thing really “weird” about Hex was, well, himself. Scarred with the “Mark of the Demon” by Indians, embittered and isolated, Hex nevertheless fought Death itself with both hands filled with irons. I can think of no hero in the comics who came to a more profound – and decidedly Weird – end to his career; as a taxidermied old man the world had long since passed by.

The tragic and decidedly weird end of Jonah Hex

“It made me very unhappy, that story. It made me very sad and upset. The people who think that story is some sort of a sadistic toying with the reader are really wrong because I got very choked up writing that story, because it was the death of a character that I really loved — not only loved, but I feel is really me.”

– Michael Fleisher, the final writer for the original run of Jonah Hex

Most Westerns are fairly short affairs; short stories, novellas or at most 200-page novels. But Cormac McCarthy’s epic Western, Blood Meridian is decidedly weird: the main antagonist, after all, is Satan himself. No voodoo intermediaries.

It isn’t just limited to books and comics. High Plains Drifter is probably one of the more famous – and subtly unsettling – Weird Westerns I can think of. On the opposite end, but still within the spectrum of weird, is Yul Brynner’s iconic (and literal) killing machine in Westworld.

story and novel of the same name.) even played in the Weird West, albeit on contract with a movie studio. He wrote the film novelization of Wild Wild West. Gamers will recognize the Weird West in the tabletop RPG Deadlands and in the expansion pack for Red Dead Redemption: Undead Nightmare.

So, although the “weird” part of the Weird West has as much variety as the Mos Eisley Cantina, the retaining theme of the subgenre is always the West: if the landscape, code of law, ethic and action isn’t decidedly Western, then it doesn’t count, no matter how weird it is.