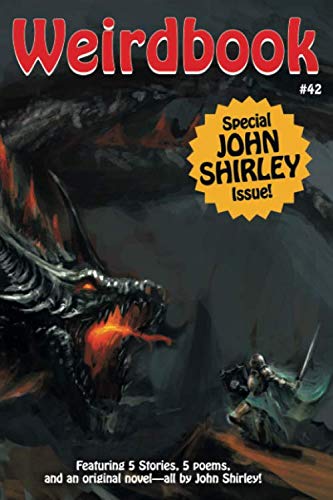 Weirdbook is one of the great small press magazines from the golden age of the small press. The magazine petered out after 30 issues in 1997. The magazine returned in 2015 with a fairly regular schedule.

Weirdbook #42 is a special issue of all fiction by John Shirley. The format is trade paperback, 6 x 9 inches. There are eleven items including a “novel,” five short stories, and five poems for a total of 157 pages.

Shirley is known as a cyber-punk author from the 1980s. This issue of Weirdbook is more on the horror and fantasy spectrum.

“Anvil Rock” is a sort of “Groundhog Day” situation with a time machine.

“Broken on the Wheel of Time” ties into H. P. Lovecraft’s “The Shadow Out of Time” with mind transfer across time.

“Nodding Angel” is a vignette with possession and killing.

“Calaphais and the Demon Malchance” is a fantasy with a sort of Arabian Nights type feel. Kind of vaguely Dunsanian with a little Clark Ashton Smith.

“That Ambulance Again” is another very effective vignette. It has an Alfred Hitchcock Presents feel to it.

The main item is the short novel “Swords of Atlantis.” This is a sword & sorcery novella featuring Brimm and Snoori. The story starts out with misadventure in Hyperborea and moves to Atlantis. Shirley uses Clark Ashton Smith’s ape-men, the Voorhis but his world does not appear to be set totally in Smith’s. He uses Plato for his Atlantis setting with some Lovecraftian touches. Because you have an adventuring pair, the comparison to Fritz Leiber is inevitable. There is some banter between the two. Brimm has some background with sorcery in addition to being good with a blade. Snoori is almost a minor character. They stumble on a plot to sink Atlantis and have to act. This was an enjoyable story.

I liked the dimensions and format of the book. Layout is single column. I am not sure if a double column layout might make for easier reading or not. “Swords of Atlantis” has been reprinted by Hippocampus as A Sorcerer of Atlantis with an added story. The issue of Weirdbook is $12.00 while the Hippocampus book is $20.00. You get a net gain for four stories for costing less by getting the Weirdbook issue. Maybe we will see more adventures of Brimm and Snoori.

I just ordered a Halloween themed anthology of horror stories partly due to it having a John Shirley story in it.