West of the Sun 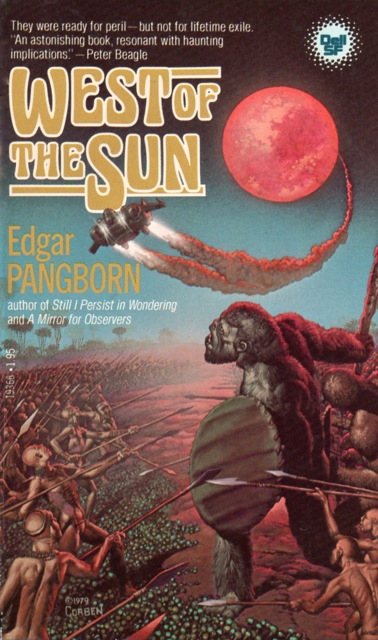 I mentioned last week that I have read way too much 1950s science fiction this year. Philip K. Dick and Science Fiction Adventures made up the bulk of it but a few other items sneaked in. Edgar Pangborn’s West of the Sun was an impulse buy at a Half-Price Books back in February. The back cover blurb interested me.

Edgar Pangborn (1909-1976) was not a prolific writer. He wrote crime fiction for Street & Smith’s Detective Story Magazine in the 1930s and had a story in Black Mask. He began to write science fiction in the early 1950s.

West of the Sun has an interesting publishing history. I am used to most science fiction novels from the 1930s though the 60s to have first appeared in a pulp magazine. West of the Sun was a hardback from Doubleday with no previous magazine publication.

It is the story of the starship Argo crashes on the planet Lucifer after eleven years of travel. There are four men and two women. The planet Lucifer luckily is somewhat Earth like. There are dangers like from large carnivorous bird like creatures. There are also two humanoid species, one ten foot tall and furred, the other are hairless pygmies.

This is a well written tale of survival, the integration of the two humanoid species into a new society while surviving a genocidal war and one of their members going crazy and setting himself up as a ruler of a pygmy kingdom. A sort of interplanetary “Heart of Darkness” though with a hopeful ending.

This could have been an Astounding Science Fiction type story with some more nuts and bolts engineering problem solving but Pangborn kept away from that. Lucifer has an interesting ecology. It is fairly well though out. Reminded me of Poul Anderson some. The writing is above pulp which is probably why it got hardback publication.

Dell Books reprinted West of the Sun as a paperback in 1966 again in 1980 (with Richard Corben cover). There was a hardcover edition from an outfit called Old Earth Books in 2001. Armchair Fiction did a trade paperback in 2011. The book is at Project Gutenberg. You can read this for free if you can stand reading from a screen. This would make a decent movie.