What Makes An RPG an RPG And Not Some Other Kind of Game? 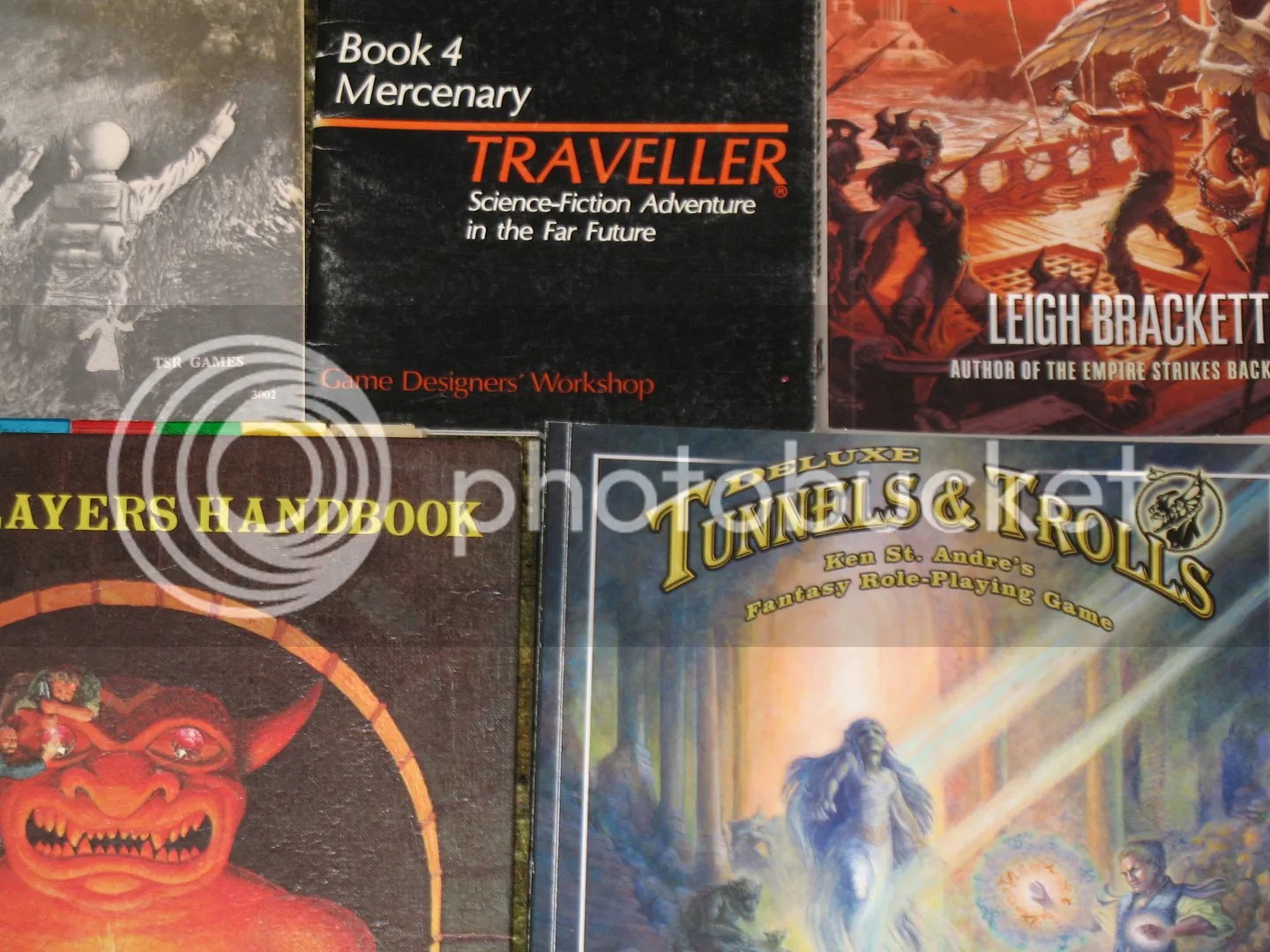 By this point, we have amassed quite a few reasons for why we just can’t talk about RPGs. In the first place, the Inquisitors of RPG Ecumenism are liable to show up at any moment and smother the discussion. Next, Zak S. has observed a myriad of reasons for why there is no RPG Theory. As if this wasn’t enough, Daniel poured fuel on the fire by bringing up how the Satanic panic of the eighties has put a damper on things by attaching a stigma to gaming that endures even to this day. But when Lewis Pulsipher asked for my thoughts on a talk he was working on entitled “What Makes An RPG an RPG And Not Some Other Kind of Game?”, I knew we were in for another round. You see… it’s not just that we lack a general theory of role-playing. Even coming up with a definition for the danged things is fraught with potential flame wars.

See, in Lew’s opinion, it was the idea of an avatar combined with progressive improvement that was central to the medium. But this was not at all how I would frame it. In fact, we had to simply agree to disagree once it was clear that tempers were going to continue to flare the further we got into it! Whether you agree with my position or Dr. Pulsipher’s, I hope you’ll agree that hotly debated points like this really is the sine qua non of RPGs– even if we aren’t all talking about the same thing!

Here is our complete exchange on the topic:

Jeffro: My first thought is on the leveling up part– Traveller doesn’t have that. At any rate, most people ignored or else didn’t know about the experience rules in Book 2. And they role-played the heck out of it anyway.

Lewis Pulsipher: So is Traveller really an RPG? Do characters become more powerful in their own capabilities (as opposed to through getting “stuff”)? But you say there are experience rules…. Sometimes it’s not called leveling. In my really-simple RPG, you gain skills when you reach certain points, and can call character Xth level, or not.

Jeffro: Yes, Traveller is an RPG.

I think the problem here is that we have not ever collectively developed a widely agreed upon terminology within the rpg scene. This runs right up into the definition itself.

How then do you get to a definition? Well, the first wave of designers knew what it was even if they could not articulate it– it’s their games that ultimately define the term.

The key ones that I would look to would be the ones that established core genres and that got insane amounts of play:

Experience rules and leveling up are not integral to the medium. Call of Cthulhu traditionally ends with a Total Party Kill. B/X and Car Wars played by the book tends to take around five sessions to “level up”. In practice, most Traveller campaigns do not even use the original game’s experience system. (Note that GURPS moved to a “character points for participation” model in order to divorce the “pure role-playing stuff” from the “gamey” elements that you could take for granted as being integral to the older games. In 1986 they formally insinuated that traditional D&D experience stuff was not “real” role-playing!)

Where the definition of RPGs becomes contentious today is in the area of the game master. New school designers hate hate hate GM authority and object to there being a “master” at the table at all. They work on ways to parcel out the power of GM fiat to the players. The dumber of these people will go so far as to declare that D&D is not an RPG because it doesn’t do some thing that they’ve decided is integral to RPGs. I can’t tell if this is cynical clickbait buffoonery or actual stupidity, but that sort of thing is why I go back to a range of early games for the definition. No one argued about this in the eighties and everyone designing understood what a role-playing game was then!

The one thing that I would say is actually integral to RPGs, though, is in fact this separation between the GM and the players. There is hidden information about the adventure or setting. The players can go anywhere and do anything whether there is rules for it or not. New setting elements can be invented by the GM on the spot in response to player questions and requests. It’s this sort of thing that makes an RPG an RPG. Everything else is chrome. Good rules and adventure designs can take a load off of the GM’s need to improvise and make rulings. However, it is the capacity to take things outside the scope of both the rules and the adventure design that makes an RPG an RPG. If you remove that, then what you generally end up with is a board game with an RPG theme. That’s totally different.

Lewis Pulsipher: So you’re saying no computer RPG is an RPG? They’re board games? That isn’t going to wash, is it? Of course, I want a definition (related to mechanics) that encompasses both. If it leaves some games that people call RPGs behind, so be it. After all, we refer to “board games” all the time when we mean board and some kinds of card games (not CCGs). And we have lots of so-called games (Euros) that are puzzles, not games. By my definition, anyway.

The spectrum of “GM is god” down to “GM is a weak rules arbiter” can all be encompassed within RPGs. It’s not even important to the mechanics. And the same mechanics can often be played either way.

You guys seem to like to argue about the “true essence”, whereas I’m trying to encompass both sides in those many arguments, by focusing on mechanics.

Jeffro: Computer RPGs are a separate genre, yes. I think that is completely fair, too.

GM’s do similar things that you see in, say, Rogue or Zork… but rpgs are necessarily different animals. Being fluent in text adventure design elements is a good idea for a GM. Having a tested “game-like” challenge that can run it self along the lines of a Rogue-like game is also good– and many rpgs get frustratingly nebulous on those points. But that crazy “anything can happen” spontaneous creativity that goes into things getting made up and improvised in the course of play are the defining factor that separates an rpg from every other type of game. The computer games cannot do it. Their only advantage is that you do not have to have the social skills necessary to organize a real life get-together to get people to play them. But they lack the sort of “lightning in a bottle” potential that make RPGs so attractive in the first place.

Lewis Pulsipher: But that “lightning in a bottle” is not game mechanics, and cannot be part of game mechanics. When I’m trying to teach people how to design RPGs, it’s a question that must be answered (how much freedom the GM supplies) but it’s not part of the rules.

Moreover, your “essence” takes us into all kinds of role-playing that isn’t even what most people would call a game. Those kinds of RP have been used in training since before D&D existed, I think. I think I participated in one when I was in high school.

If you take 100 gamers and ask if computer RPGs are RPGs, most are going to say yes. Despite that GM limitation– which, yes, makes tabletop RPGs potentially better (and worse) than computer RPGs.

Jeffro: Yes, and if you ask a Euro Gamer about “MicroGames”, he will think Love Letter and not Warp War. The fact that Euro Gamers of today do not know that inexpensive wargames that typically had a science fiction or fantasy theme ever existed doesn’t change what MicroGames are.

But that’s a different story….

At any rate, letting people that have never experienced a real tabletop RPG define them seems kind of dumb to me. Of course, I tend to write about seventies culture surrounding game design, science fiction, and fantasy while your audience will be (in a lot of cases) comprised of millennials that can’t be bothered to read a book. (!!)

Should the definition be glossed over, though? Possibly. I suppose I could live with a footnote or maybe a supplementary video that detailed a few things that are possible with tabletop rpgs that simply cannot happen in other mediums and genres of game.

But I disagree that the more, uh…  alchemical elements are not game mechanics. Or rather, RPG designers have to assume that the game master will interpolate everything that is necessary to bring the game to life. And adventure designers need to understand how these softer elements can be leveraged within their virtual playgrounds. I don’t think you can take a computer RPG mentality to the design process and expect to be successful.

At any rate, RPG products created by people that have no intuition with regards to what is going on with this are almost invariably execrable. I wouldn’t want someone to set off to make their first Lulu product without this sort of thing being pointed out to them. For the intermediate creators, they need to know precisely how their design elements can introduce friction into the interpolation process and how they can instead reduce the GM’s burden in actual play.

Ever hear the story about why the great RR companies of the late 19th century failed? They thought they were in the Rail Road business, but they were actually in the bulk (and passenger) transport business.

MicroGames are small cheap games that can be played quickly. MtG and other CCGs are the real successors. When you think of MicroGames only in context of those old board games, you’re thinking “Rail Road style.”

I have added a human or programmed GM as a third element, as at some point it IS part of the mechanics. I can point out the potential (both ways) of the human as opposed to programmed GM.

Lewis Pulsipher is the designer of the classic board game Britannia and the micro-game Dragon Rage, he is the author of countless articles published in Dragon, Space Gamer, and White Dwarf, and he is the author of Game Design: How to Create Video and Tabletop Games, Start to Finish. He also teaches online courses on game design.