When Everything is Special, Nothing Is 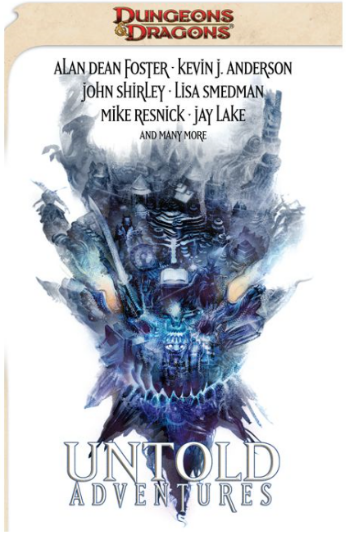 Beating up on Dungeons And Dragons Official ™ licensed works rightfully has a reputation for playing the literary criticism game with the difficulty set to “I’m Too Young To Die”. The lifestyle brand sells the books, and the community, not the actual prose, and Wizards of the Coast has only rarely made an effort to improve on the well-earned reputation of their novels. They sell enough to turn a profit, and keep the brand alive, and these days reinforce the usual political narratives, and that’s enough. Back in 2011, they took a shot at it by assembling a solid team of well-known writers such as Alan Dean Foster, Mike Resnick, and Kevin J. Anderson to contribute to short works to Untold Adventures: A Dungeons and Dragons Anthology.

Curious to learn how an author such as Alan Dean Foster might approach such a herculean task, reading his entry, The Steel Princess provided some insight into why the D&D style of fiction always feels so hollow. Alan Dean Foster has long been a workhouse of traditional publishing. While his prose never truly excels, his ability to take the lighter fare of screenplays and enhance them with considerable world-building and depth in settings and characters has earned him a reputation as a man able to spin, if not gold, at least a valuable thread of silver from cinematic straw. If anyone could make D&D fiction interesting, certainly it’s Alan Dean Foster.

That being the case, The Steel Princess provides further evidence that no one can make D&D fiction interesting. He makes a valiant effort, and the core of this story shines through despite the thick covering of D&D tropes. Long ago a princess was cursed to guard a battlefield until all the fallen and broken swords, and her new metallic body composed entirely of blades, rust away to nothing but crimson dust. Our hero seeks out this Queen of Swords to trade his life that she might command a sliver of steel lodged in his brother’s breast to release its hold and spare the man’s life. Those two sentences might make for an incredible tale of sacrifice and redemption and love. If handled right, the set-up, the setting, and the resolution could resonate deeply with the reader and provide a rare glimpse into a world of wonder and alien beauty and magic.

If handled wrong, and they most certainly are handled wrong, the core of this story becomes just another everyday occurrence. Boy meets princess. Boy breaks curse. The end.

The trouble begins right from the start. The first half of the story actually consists of a bar-fight to showcase how noble and strong the hero of the piece is. This being a D&D novel the bartender has to be a dwarf. The antagonists three brother ogres who don’t cotton to the hero’s kind around these parts, what with these parts being fit only for decent folk, of which the hero most certainly is not. Because he is a snow leopard Rakshasa. A sorcerous snow leopard Rakshasa. Who is, most strange of all, also a Ranger. With a sword with not one, but two personalities of its own, and personalities that don’t get along with each other. Oddity piled on oddity with even the passing mention of the patrons fleeing the impending barfight requiring a reference to an elf.

It’s all so tragically mundane in its everyday acceptance of the wondrous that it sucks all the magic and mystery out of the tale. When our Rakshasa does journey to the creepy strangeness of the blasted rubble filled battlefield, the alignment of the broken blades pointing at a central point carries no weight and no mystery. It’s just one more-light on the Christmas tree and conveys no more novelty than blades of grass or wind-swept sands.

Even the accursed princess, a clockwork demon of blades with hair of garrote-string and wrists and ankles like hilts, cannot be simply a cursed woman. Her natural form is some sort of elven creature, and not just any elven creature, but an extra special sub-race of elves! It’s all just too much to carry any real impact. With all of the casual disregard for any firm foundation to the story, the journey from the everyday magic to the dire magic of the battlefield conveys no more suspense than stepping from a parking lot into the cool confines of the local Wal-Mart.

How much more powerful the mystery of the cursed princess had the tale been that of a knight errant wandering the French countryside? The opening fight to establish his character – no mean killer, but an honorable man in search of a means to save his brother’s life – would work just as well had he fought three local farm toughs, and it would have grounded the story in the mundane so that the journey to find the Steel Princess would build the suspense and allow more of the dreamlike ambiance of her waking tomb to shine forth, rather than serve as just one more layer of frosting on an already heavily frosted cake.
A little magic goes a long way when set against the gray backdrop of a mundane world. We are creatures of habit, we humans, and our immunity to wonder grows swifter than a drunk’s to alcohol. You need to use a deft touch when dealing with the supernatural. An over-reliance on the checkboxes of the D&D game and setting forces writers to wield magic with all the subtlety of a sledgehammer and all the nuance of a Michael Bay movie. Unfortunately, that kitchen-sink approach to fantasy settings has so become a part of D&D’s genetic code that you can’t have one without the other. As a result, it becomes nearly impossible to use the D&D style of fantasy setting to instill in the reader the same sense of wonder that one gets from a more sedate passage into the realms of wonder such as one finds in more remarkable literary fantasy works written by men not hobbled with the heavy load of expectations inherent in D&D fiction.
Thanks for trying, Mr. Foster. You did your best, but not even the man who made George Lucas’s Star Wars novels interesting could do the same with D&D books.