There are many things that science fiction has traditionally done very well, but, just as Ender’s psychological “flaw” is critical to his “Game,” and just as every Death Star seems to be remembered for its version of an exhaust port, sometimes it is important to take a hard look at the genre’s fail points, and ask, “Why?”

Ursula LeGuin’s Hugo-winning and Locus-nominated short story The Ones Who Walk Away from Omelas is an allegory told in the first person by a narrator who is incapable of describing the society being allegorized:

The story has no plot, no protagonist, and a narrator who fumbles about describing the indescribable (The narrator is thoroughly contemporary 1973 American, by the way–using common slang like “If you can’t lick ’em, join ’em” and “Bleh.””–and never bothers to answer how she has seen the wonders and horrors of Omelas.); but these are not necessarily problems. The story is fully sociological, and so intentionally avoids traditional forms in an attempt to take the simple guise of a “Just So” story about the concept of modern privilege. 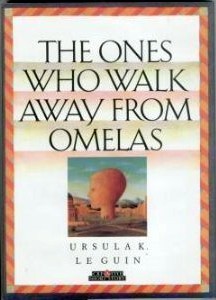 The problem really arises when the reader starts to notice that the sociology behind the allegory is wrong.  That doesn’t mean it isn’t worth reading–the story has been widely anthologized and is frequently used in university science fiction classes for analysis–just that its underlying framework highlights a common shortcoming in the genre.

The narrator contrasts modern society (“we”) against her inability to describe the happiness and progressiveness of the people of Omelas (“they”):

The trouble is that we have a bad habit, encouraged by pedants and sophisticates, of considering happiness as something rather stupid. Only pain is intellectual, only evil interesting. This is the treason of the artist: a refusal to admit the banality of evil and the terrible boredom of pain. If you can’t lick ’em, join ’em. If it hurts, repeat it. But to praise despair is to condemn delight, to embrace violence is to lose hold of everything else. We have almost lost hold; we can no longer describe a happy man, nor make any celebration of joy.

They were not simple folk, you see, though they were happy. But we do not say the words of cheer much any more. All smiles have become archaic. Given a description such as this one tends to make certain assumptions. Given a description such as this one tends to look next for the King, mounted on a splendid stallion and surrounded by his noble knights, or perhaps in a golden litter borne by great-muscled slaves. But there was no king. They did not use swords, or keep slaves. They were not barbarians. I do not know the rules and laws of their society, but I suspect that they were singularly few. As they did without monarchy and slavery, so they also got on without the stock exchange, the advertisement, the secret police, and the bomb. Yet I repeat that these were not simple folk, not dulcet shepherds, noble savages, bland utopians.

So, the people of Omelas (that is, “Salem” backwards and emphasized, an obvious reference to both the original meaning of the word–“Peace”–and the popularized bogey-version of the infamous witch trials. Salem, O!) are not backward in their contentment in any way. They are a progressive society, farther ahead in the future than us: they have ended violence and commercialism and dictatorship and financial tyranny, without losing civilization: in fact, civilization has clearly advanced in the pursuit of peace, goodwill and happiness.

All the processions wound towards the north side of the city, where on the great water-meadow called the Green Fields boys and girls, naked in the bright air, with mud-stained feet and ankles and long, lithe arms, exercised their restive horses before the race.

The narrator’s “as you like it” approach is betrayed by her first instinct, now rejected. In other words, imagine any religion at all–except for any that promises “union with the deep godhead of the blood.” This is a very specific utopia that she suggests, beyond even the imagination of Herodotus: something akin to the Marion Zimmer Bradley-wing of the SCA (i.e. the alternate reality counter-culture aspects, as opposed to the studious historical modeling cliques.)

In short, it portrays a sociology instantly recognizable to “fandom”. It’s errors and oversights in sociological views make sense to a reader who, for example, believes himself to be a member of a privileged class  at the expense of the poor. He may not know exactly how that mechanism works, but he knows, in his bones, that it is true. That’s why he feels so guilty all the time.

That is also why the “utopia” of Omelas is so appealing to the narrator: there is no guilt.

One thing I know there is none of in Omelas is guilt. But what else should there be? I thought at first there were not drugs, but that is puritanical. For those who like it, the faint insistent sweetness of drooz may perfume the ways of the city, drooz which first brings a great lightness and brilliance to the mind and limbs, and then after some hours a dreamy languor, and wonderful visions at last of the very arcana and inmost secrets of the Universe, as well as exciting the pleasure of sex beyond belief; and it is not habit-forming. For more modest tastes I think there ought to be beer.

The narrator later goes on to say that probably no one takes the drug, because they are already so happy. So,no guilt, free drugs, free beer, free love. What’s not to like? Of course, with any allegory, there’s always a point. And the narrator illustrates this by confessing that all of this happiness and wonder is–without explanation–the result of the ongoing abuse, imprisonment and neglect of an innocent child.

The tale is passive throughout. Most Omelas residents learn to live with the cover-up. A few get fed up and leave. But none dare act on behalf of the child.

Compare this story to  Flannery O’Connor’s (non-scifi) The River, which also contrasts rich and poor, light and dark, and the suffering of a child. What O’Connor does, however, that so many science fiction writers writing for “fandom” don’t do is she gets the sociology right. The rich abuse their privilege, but so do the poor. The struggle for meaning and right living, the importance of faithful, if failed, saints, and the movement of courageous action are all included in a speculative story that is far more complex than Omelas pretends to be.

And this is really where Le Guin’s allegory comes apart: those who leave Omelas are looked upon in wonder and uncertainty, as if their acts are acts of courage. But they aren’t courageous, in any sense of the word. They flee tragedy, but out of the dozens or hundreds or thousands of the “ones who leave Omelas,” not a single one attempts to defy the rules and save the child. In fact, the narrator insists the child can’t be saved, is not worth saving, and is better off suffering in the dark. The message of the story, if there is one, is this: There is no courage.

And if any genre should choose to embrace such a theme far less frequently and to far fewer accolades than it currently does, one might think it would be the genre of ideas.