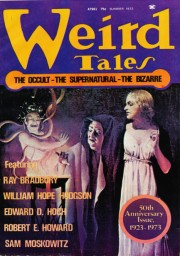 It has been one and a half years since the last issue of Weird Tales has been published. Weird Tales has undergone four separate attempts at reanimation. There was the Sam Moskowitz edited version for four issues in 1973-74. That was a mostly reprint magazine of public domain material with a few new stories.

Lin Carter edited four paperback anthologies for Zebra Books 1980-1983. This was the first version on my radar. I rather liked it with the mix of reprints, new stories by Weird Tales writers, and a few new stories by new authors who had the right vibe.

I bought the first issue of the Gordon Garb slick 8.5 x 11 inch magazine in 1985. Eide’s in Pittsburgh had gotten issues in that day and I snatched that one up. Good thing as I have read this issue is very rare. The second issue was never distributed.

The title did not lie fallow for long at Terminus Publishing put out a magazine using the title under the editorship of George Scithers, Darrell Schweitzer, and John Betancourt. The first issue was dated as Spring 1988 though I bought it in October 1987 (again at Eide’s).

I have mixed feelings about this incarnation of the magazine. Scithers and Schweitzer got the magazine out on a mostly regular basis. I thought the magazine was a little too much occupied with writers of the past 20 years than discovering new talent. Lovecraftian fiction seemed to be unwelcome 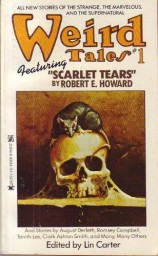 there. My friend, Richard L. Tierney just could not break into the magazine. None the less, the magazine did publish Keith Taylor and Tanith Lee and even got one of the last Kane stories out of Karl Edward Wagner.

In 2007, editorship went back and forth between Stephen H. Segal and Ann Vandermeer for nine issues. I did not care for this era. Much of the fiction struck me as self-consciously ironic if not snarky at times. A tone of this nature has a smug if not superior attitude underlying it. The Unknown model has never worked out well for succeeding magazines. A reason I am not much of a fan of L. Sprague de Camp’s fiction is do to the smug attitude.

Marvin Kaye bought Weird Tales in 2012.  A short time later, Jeff Vandermeer, Ann Vandermeer’s husband, published “Moving Past Lovecraft.” Should these people have been involved with a magazine called Weird Tales to begin with? 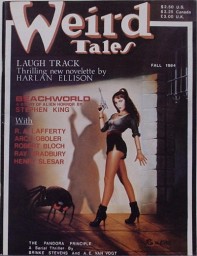 Terence Hanley’s excellent Tellers of Weird Tales blog has a five part series on the recent history of the magazine with some opinion editorial thrown in.

I welcomed Marvin Kaye becoming the editor of Weird Tales. From the description, it would be a return to fiction that had made the magazine a legend. The first issue was about six months after the last of the Ann Vandermeer issues. The first issued edited by Marvin Kaye even had a decidedly Lovecraftian slant. It was at this time that Kaye announced he was going to run an excerpt of a novel called Save the Pearls by Victoria Hoyt. Set in the future with racial issues examined, it set off the predictable hysterical response to perceived thought crime. Kaye backed off and did not rut it. He displayed poor judgment wading into the realm of racial politics.

The three Kaye era issues of Weird Tales came out at around nine month intervals. Sometime last year, the Weird Tales website went down. There was also the case of stories being bought for the magazine and then returned while Kaye put out the call for submissions for the same themed issues. This has not generated good will among writers, especially those who had stories first accepted and then sent back.

So right now, the magazine is in limbo with no sign of an issue coming forth anytime soon. For a magazine to be healthy, you need a minimum of 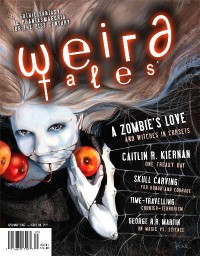 three issues per year if not four. Putting out an issue a year does not cut it and sooner or later, generally sooner, that publication will die.

I have always viewed the various revivals of Weird Tales as something of a Franken-magazine. The incarnations have either been exercises in almost pathological nostalgia on one hand or modern disdain for the past. The revival since 1987 never really seemed to catch the feel for the original magazine. It would have been better off having a different name, which is was in the late 1990s. But, commercial interest always seems to bring the name of Weird Tales out of the grave instead of letting it lie in peace. 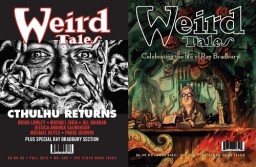