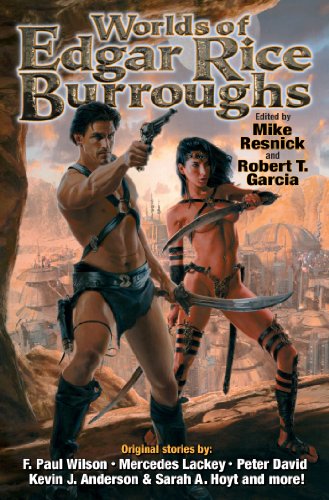 A trip to the local Waldenbooks or B. Dalton Bookseller in the 1970s up through the middle 1980s would generally have a shelf or more of Burroughs paperbacks. Burroughs has faded away since then. Del Rey did some Tarzan doubles in paperback in the mid-1990s that petered out. He is not the foundational author that he once was. He was a gateway writer to fantastic fiction for many.

Worlds of Edgar Rice Burroughs (Baen Books) is an anthology of modern writers using Burroughs characters and settings in new stories. The trade paperback was published in October 2013. The mass market paperback at the end of 2014. The movie John Carter was out in March 2012 so perhaps the movie was the impetus for this book.

I can remember looking at this book first in trade paperback and then the mass market paperback when each came out. I also passed as the roster just did not hit my excitement level. Finally, I thought I should get it. The mass market edition, my preferred form, is out of print. Neither Amazon nor Barnes & Noble had it. Amazon still has a few copies of the trade paperback.

Mike Resnick and Robert T. Garcia are the editors. Resnick I know having read his Burroughsian sword & planet Ganymede novels and a few of his space operas. Robert T. Garcia is someone I do not know. A check at the internet speculative fiction data base shows he edited the magazine American Fantasy in the 1980s. A magazine that eluded me at the time.

The book is 356 pages including introduction and author biographies. Eleven stories contained therein. The cover is horrible. Static, photorealistic poses that is book cover art these days. Edgar Rice Burroughs has been blessed to have wonderful illustrators– J. Allan St. John, Roy Krenkel, Frank Frazetta. Even Esteban Maroto is fine art compared to this.

Former editor of The Magazine of Fantasy & Science Fiction, Kristine Kathryn Rusch has the first story. I think I have read a story or two by her in the past but just don’t remember. “Tarzan and the Great War” has Tarzan in Algiers during WW1 looking for leads on the whereabouts of the missing Jane. The story reminds me more of Eric Ambler than Edgar Rice Burroughs with intrigue of foreign spies. The story is competent but nothing earth shattering. Something different for Tarzan.

Mercedes Lackey must be a popular pink fantasy writer as others write stories set in her Valdmar world.  She has a story set in Pellucidar narrated by a Sagoth.  The story has a winged girl from the moon that stays in one spot in the inner world. She cannot get back to that world and helps in a fight with an enemy tribe. The story just sort of ends rather abruptly.

Richard A. Lupoff’s Edgar Rice Burroughs: Master of Adventure was a favorite non-fiction book. I bought a used copy in 1983. It showed what an 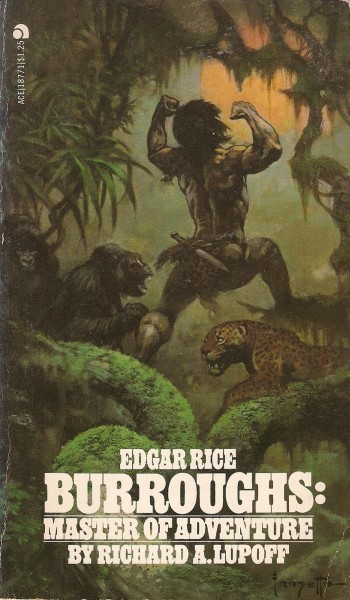 entertaining, non-academic book on fiction could be. On the other hand, he totally monkey fornicated the round robin novel Ghor, Kinslayer with a smart ass end chapter. Lupoff did not seem to like Carson of Venus in Master of Adventure. “Scorpion Men of Venus” has Carson and Duare in dire-straights fighting the Scorpion Men. A woman in aircraft rescues them. They are taken to the mountain abode of the proverbial mad scientists who is originally from Earth, the sunken continent of Mu to be exact. This mad scientist wants to return to Earth. The story takes a very un-Burroughsian turn. It also has a rather abrupt ending.

I have wanted to read Mike Resnick’s “Forgotten Seas of Mars” for a while when I first read about it. Originally published in 1965 as a chap book. I have never seen a copy. Resnick writes a close imitation of Burroughs and an adventure of John Carter following the events in Llana of Gathol. Resnick mentions that due to the book contract, Worlds of Edgar Rice Burroughs could not include any new stories with John Carter or the Mars/Barsoom setting. They could include a story that was not new. My guess is the anthology Under the Moons of Mars: New Adventures on Barsoom (2012) tied up those rights.

“Apache Lawman” by Ralph Roberts is a yarn with Shoz-Dijiji. I have not read Burroughs’ The War Chief  and Apache Devil. I can’t seem to find affordable and nice condition copies with cover art by Ronnie Lessor or Frank McCarthy. This was the area that Burroughs knew having served in the U.S. Army, cavalry branch in the 1890s. There were still skirmishes with Apaches at this time. How many of you knew the last fight between the U.S. Army and Apaches took place in 1917? Having not read the original novels, I don’t know how Roberts story compares. The story itself moves along well enough.

“Moon Maid Over Manhattan” by Peter David is an incident between the events in The Moon Maid and The Moon Men. I did not care for the first part but it did improve after the Kalkar invasion of Earth.

I have read two stories by Sarah Hoyt, neither of which I liked. Her bad steak with continues with “Tarzan and the Martian Invaders” cowritten with Keven J. Anderson. Tarzan travels to Africa to foil an invasion from Mars. Hoyt violates Burroughs internal consistency with having totally different aliens from Mars. This read like a clunky story from early 1930’s Wonder Stories. 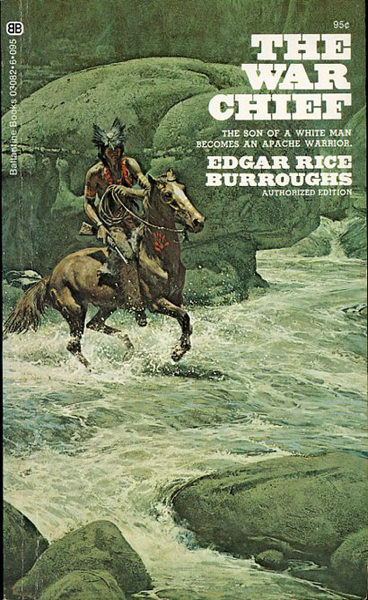 I have read a few of Max Allan Collins’ “Quarry” novels and enjoyed them. “The Two Billies, A Mucker Story” is possibly my favorite story in the book. Billy Byrne is called to rescue a kidnapped socialite fiancé of the girl he loves. The story is a good hard-boiled piece.

I did not care for Todd McCaffrey’s “To the Nearest Planet.” It has been around 35 years since I read Beyond the Farthest Star. I do remember liking it. McCaffrey has an expedition by Tangor to a neighboring planet. They find a static and declining culture living in domes after a planet wide war. Instead of bad 1930s science fiction, this was bad 1960s science fiction.

F. Paul Wilson has a story set on Pellucidar with a trip to the moon of that milieu. This story like McCaffrey’s takes a science fiction twist with an artificial satellite, computers, and robots. I did not care for this one either.

Talking and listening to Joe Lansdale at Pulpfest last year, I get the impression he also read a lot of Edgar Rice Burroughs growing up. He takes Tarzan to Caprona in “Tarzan and the Land That Time Forgot.” Lansdale kept it Burroughsian. Tarzan is a killing machine in this one. I liked it.

So, a few stories I enjoyed, some that were meh, a few I did not like at all. Typical for an original anthology. I give credit to Resnick and Garcia as editors. This easily could have been a pile of dog feces had they not held the line. Rusch and Lackey delivered better than what I was expecting. We are now about 100 years out from Burroughs’ hey days. Attempting to capture the feel of the scientific romance without parody or descending into steam punk is very difficult. It is interesting that sword & planet fiction had a bump in the late 1960s with Michael Moorcock as Edward P. Bradbury, Resnick himself, Lin Carter, and Kenneth Bulmer as Alan Burt Akers.