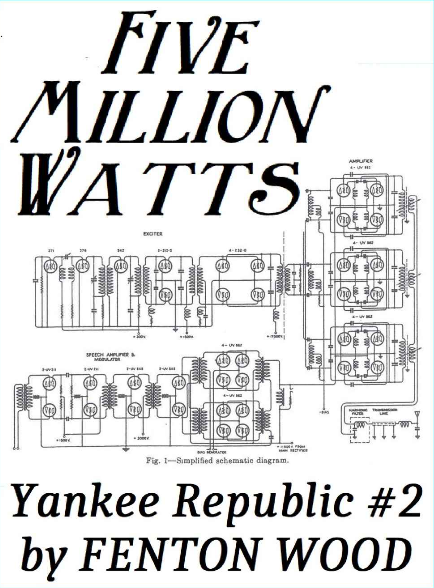 Last fall Fenton Woods dropped an unheralded work of brilliance on the literary world with which teased us with Pirates of the Electromagnetic Airwaves (previously reviewed at CH) the subtitle Yankee Republic Book #1.  The series continues in the recently released Book #2, Five Million Watts, in which Fenton Woods pulls the curtain a little further back on the sepia-tinged not-quite-history world of the Yankee Republic.

True to his word, Fenton leaves the avatar of boyhood adventure, Randall Quinn, and follows the brains of the first book, Philo Hergenschmidt, as he graduates from a small town pirate station to the big city to work for the biggest and most powerful radio station in all of the Yankee Republic.  Thanks to a ‘first come first served’ regulatory attitude, radio 2XG has been granted exclusive charter to a large chunk of the radio spectrum that they can keep as long as they can hold onto it.  If the signal ever fails, the station loses its license, an potentiality that the hordes of smaller stations licking their chops.  Philo’s mundane job, and the mundane plot of the book, revolves around efforts to stave off that fateful day.

As with the pirate station 9X9 in Book One, the fate of 2XG provides the bare skeleton on which the deeper stories hang.  Radio 2XG becomes more of a framing device for a modern American mythic cycle that impacts the station in numerous ways.  It also provides a means by which Fenton can deliver short and punchy little tales of comedy, horror, and terror without missing a beat.  In fact, the smooth transition of these interludes represents one area where Fenton steps up his game from Book One.  Unlike Randall’s playground stories and several of the longer digressions in Book One, every little tale presented in Book Two had either a direct influence on the plot or reveals something the character of the story teller.

Which is not to say the interludes in Book One are not fun or not important.  Several of them are revisited in more depth in Five Million Watts, and what they reveal about the world of Yankee Republic leaves the reader wanting to know more and more about it.  The Yankee Republic is an alternate earth, and one filled with wild lands and tall tales, some of which may even be true!  Part of the fun of any alternate earth is figuring out exactly what changed, how, and why.  Instead of a blanket explanation in the foreword, Fenton slowly dribbles out information in brief asides, or puts the information into the form of half-remembered stories, semi-lucid dreams, and the mouths of unreliable narrators.

Fenton dangles the uncertainty of the connection between there and here in a way that entices the reader into wanting more, but the world is so much fun to visit that the real answer, if there even is one, doesn’t really matter.  The setting and the characters are likable enough in their own right that the answer to “what’s in the Abrams-style mystery box” can remain obscured and uncertain without the reader ever feeling cheated.  What’s in the box is just set-dressing – how the hodge-podge collection of tech geeks, story tellers, and aged almost-hippy musicians stave off one disaster after another shines in the spotlight and makes this one of the most fun books you’ll read this year.

It feels wrong to call Five Million Watts a YA novel, now that the YA genre has morphed into a weird sort of catch-all term for romance writers looking to break out of the over-crowded romance pack and dystopian grrl-power stories written by those trying to distance themselves from science-fiction.  We need a new term for books that target the adventurous and perhaps a little too brainy for their own good readers in their early teens.  Because that’s where this novel belongs.  It doesn’t feature a single fist-fight or gunfight.  It’s a technological adventure where the action comes from the corporate and governmental espionage aspects, and the thrill of staving off a massive natural disaster.

Five Million Watts doesn’t make any sweeping accusations about who we are or why tyranny is our default state – at least not on the surface.  If you look deep, you can find hidden meanings and messages in the small places in the story, but they don’t hit the reader over the head.  They harken back to the subtle interplay of narrative and culture that most modern authors reject in favor of brick to the face messaging.  It’s the difference between “Wouldn’t it be nice if the world was a nicer place to live?” and “This is the miserable hellscape where my political opponents want to take us.”

Nightmare visions might sell big in the current market, but as for me and my house?  We’ll take the pleasant adventures in a world too much UNLIKE ours as a pleasant reprieve from the modern world.  And that world is increasingly the Yankee Republic – we can’t wait for Book #3: Tower of the Bear to arrive so that we can continue to spend more time in Philo’s world.