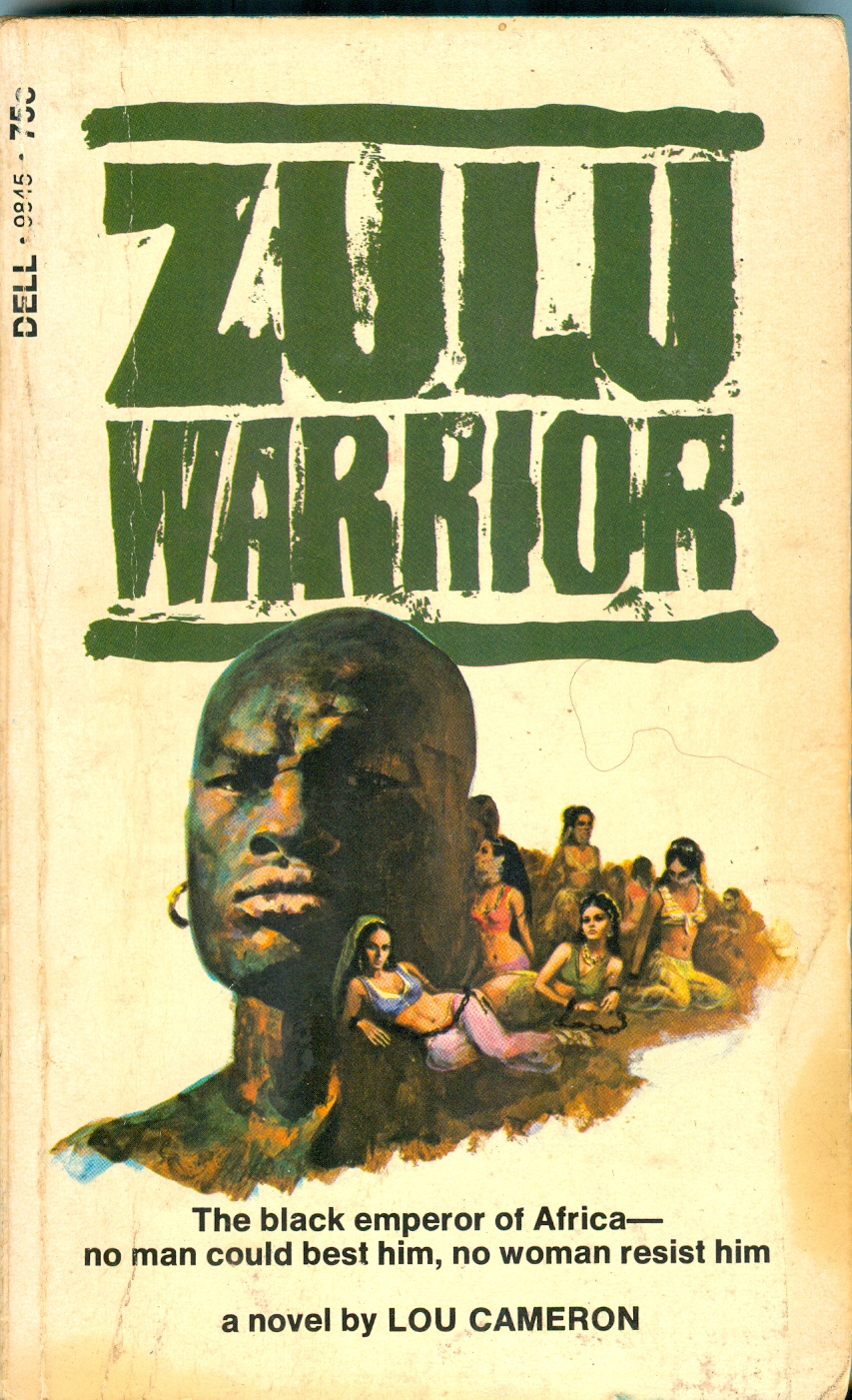 I have written about paperback writer Lou Cameron. Zulu Warrior is a book I have been trying to procure for around 10 years. Enter paperback trading on social media. I picked up some paperbacks at PulpFest this past summer for the purpose of trading. An associate on social media was interested in some titles in my possession and he lives in the area of one of the great used bookstores in U.S. I gave him a list of things I was looking for including Zulu Warrior.

Lou Cameron wrote mostly westerns, detective, and war novels. He won the Spur Award for best western novel in 1976 for The Spirit Horses, a novel about the U.S. Army and camels in the 1850s.

Zulu Warrior as the title would imply is set in 1800s Africa. The novel is told in the first person by Lenana, a Masai warrior. He meets M’Chuma, a Zulu warrior, and nephew of recently deceased Shaka. M’Chuma is in exile while Dingane, Shaka’s half-brother is king of the Zulus.

Lenana and M’Chuma take service with Queen Kuloga of the Wasumu tribe. As far as I can tell, there is no Wasumu tribe in East Africa. There are hints of an Egyptian origin of the tribe and Queen Kuloga is described having blue eyes. Cameron might have been making a nod to H. Rider Haggard and She.

Arab slavers under Tippoo Tib out of Zanzibar are ranging freely taking slaves. M’Chuma comes up with a plan to stop them.

There are some side adventures along the way such as meeting a German explorer. M’Chuma and Lenana steal some guns from Arab slavers. M’Chuma trains a heterogenous army derived from various tribes of East Africa.

There are some fights with Arab slaver caravans and taking of a small fortress. Cameron appears to have studied African weapons and fighting styles. M’Chuma uses the famous Zulu assegai. Lenana has the long throwing spear of the Masai. Cameron refers to the Masai short sword as the panga, which is more of a machete type blade instead of a sime.

There is a casual sadism present in the novel as Lenana and other Africans rape and then kill captured women in the Arab stronghold.

The novel is something of a mess from a historical perspective. Queen Victoria, the German Kaiser, Dingane, and Tippoo Tib are all contemporary. Tippoo Tib was in the late 1800s. Guns are referred to as “express rifles” using brass cartridges. In the 1830s, muzzle loaders using percussion caps and black powder were the norm. Brass cartridges were a good 30 years away. So, this is a mythic East Africa just like you see all too often with Westerns.

The cover is salacious with the lurid blurb “The black emperor of Africa – no man could best him, no woman resist him.” The cover artist is not listed.

This was a Dell paperback from 1971. It might have been an attempt to tie in to the plantation novels which had a run around this time. Cameron also had a novel entitled Ashanti from Lancer in 1969. I remember Glenn Lord telling me that Larry Shaw, editor at Lancer, went to Dell taking the Robert E. Howard book Bran Mak Morn with him. I wonder if Zulu Warrior was another book that Shaw took with him to Dell?

It is a strange novel having a Masai narrator. The books I have read so far by Cameron were told in third person. Maybe first person was the hook for him to tell the story.

When it comes to historical novels set in Africa, no one beats Wilbur Smith. If you have not read him, check him out.