A Pulp Revolution for the Comics Crowd 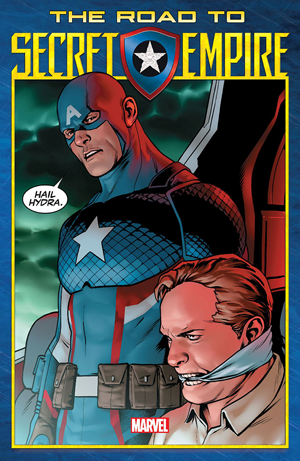 aka The Road to Marvel’s Ruin by Nick Spencer

I’m known for my florid, almost purple prose and lengthy, albeit humorous introductions. No time for that today. I’m leaving for the vasty wilderness and a weekend-long Internet blackout, and I have to get this one in the can before I depart for the great unknown. So, please pardon the upcoming abrupt transition.

Industry sales are dropping precipitously, landmark stores are closing their doors, Marvel Comics is melting down in front of us (I mean that in a strictly “the nuclear pile has burned through the containment structure and is scorching its way towards the planet’s core” sense), and even the valiant efforts of (nearly) the entire DC staff hasn’t halted the collapse (or even slowed it down appreciably). This is heartbreaking. And it all starts with Marvel.

YouTube comic reviewer (and open shitlord—I mean he talks like a /pol-ack, listens to Gavin McInnes, and refers to SJWs Always Lie constantly for crying out loud) “Diversity & Comics” released an excellent trio of videos illustrating the sharp decline of the comics industry, why it’s happening, and what to do about it.

And the decline is sharp. Witness:

Sales are dropping, they’re dropping hard and fast, and the industry is rapidly moving towards the Brick-and-Mortar Apocalypse at Pulp Speed Seven. The explanation, as always, goes back to infiltration by people who hate comics, but nonetheless want to hijack them for their own purposes.

These people hate comics, and Fantasy & Science Fiction, and video games, and, really, anything else that doesn’t openly propagandize for their beliefs. They have attempted takeovers of all these industries, and mostly succeeded. To the extent that they’ve succeeded, the industries have suffered. Let’s run through the list:

Tradpub (the major publishing houses you’re familiar with, like Random House) is bleeding out in large part due to the familiar antics. Fortunately Indie publishing is challenging their dominance whilst also undermining their business model.

Video games? Well, that one’s up in the air right now. Recent events at Google and other leading software companies, as well as the content and tenor of presentations at the last E3 and Gamescom, have me worried.

Comics are, as I may have mentioned before, dying, but a potential solution has emerged. Ironically, the dire straits the comics industry is in make this possible—if Marvel were healthy, it’d have no chance of success. Take a listen, starting 9 minutes into this video:

What D&C is talking about is, in effect, a Pulp Revolution for the comics industry.

The Pulp Revolution is a bunch of guys who love the classics of Fantasy & Science Fiction, classics which have been buried and forgotten. (Comic fans, imagine if Superman, Batman, Alan Scott, and EVERY OTHER CHARACTER of the Golden Age had all been deliberately forgotten and buried for seventy years, further imagine that few modern comics fans had ever heard of them and fewer still had ever read them. That’s the state of modern F&SF.) Pulp Revolutionaries want to take the Pulp spirit—the excitement, entertainment, and VITALITY of the Pulps—and make new works with it. That’s what comics needs: a group of people, passionate fans of superhero comics, to pick up the torch dropped by Marvel.

Comics need an indie revolution. The medium needs its own Pulp Revolution. It needs people who love superhero comics to start making their own. I’d love to see hungry and highly motivated writers and artists make their own great comics, and surpass or even supplant Marvel.

Now, if you’ve been following D&C for the last couple of weeks, you’ve seen him slowly moving towards starting his own comics company, whether he realized it or not at the time. It makes sense. He knows the industry and the medium, knows the people in the industry, and knows the mechanics behind making comics. And, even though his recent original comic (Jawbreakers) was savaged on release, he’s taking the criticism onboard, learning from it, and starting over. He’s upping his game.

I have no idea if Diversity & Comics is capable of succeeding as a writer of comics. But he seems knowledgeable and skilled enough to, at the very least, become the EiC and publisher of a new comics company, an indie competitor to Marvel, and thus help others succeed at making comics. Which, given Marvel’s current sales, means this entirely hypothetical (but apparently aborning) company could begin beating Marvel at its own game. Marvel’s rapid decline into irrelevance has opened the door for some young upstart rival to do to them, what they once did to DC. And that rival could be D&C.

Or if it isn’t, it could be someone else. Of course it won’t be easy, but it is possible. And at this point, it’d be cosmic justice.

(Or Cosmic Cube justice, given this is all Nick Spencer’s fault.)

NOTE: Some factual errors that crept into this post have been corrected based on feedback from Diversity & Comics.