An Excerpt from QUANTUM MORTIS: A MAN DISRUPTED 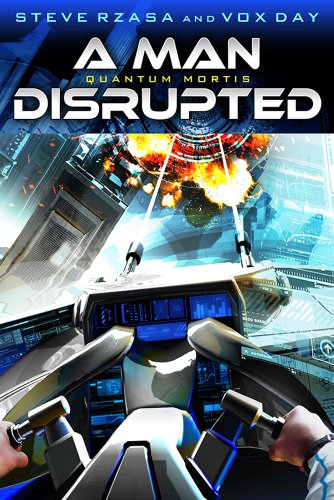 The independent planet of Rhysalan provides Sanctuary to 1,462 governments-in-exile. It is the responsibility of the Xenocriminology and Alien Relations department of the Military Crimes Investigation Division to keep a firm leash on the hundreds of thousands of xenos residing on-planet. Assassinations, revolutions, civil wars, and attempted planetary genocides are all in a day’s work for Chief Warrant Officer Graven Tower, MCID-XAR.

In addition to a missile-armed aerovar, his trusty Sphinx CPB-18, and MCID’s extremely liberal policies concerning collateral damage and civilian casualties, Chief Tower is assisted by his extreme xenophobia as well as a military-grade augmented machine intelligence that believes it has found God. So when the disintegrated remnants of the heir apparent of an alien royal house are discovered on the streets of Trans Paradis, the question is not so much whether the killers will eventually be found, but if it is the criminals or the crime investigators who will contribute more to the final body count.

QUANTUM MORTIS is the action-packed Mil-SF mystery series from Vox Day, author of the epic fantasy series Arts of Dark and Light. Written with Steve Rzasa, QUANTUM MORTIS: A Man Disrupted is the first novel in the series featuring Graven Tower, MCID.

Murder is the unlawful killing of a sentient corporeal being rated higher than 9 on the Takeno-Turing scale, with malice aforethought. Every murder perpetrated by radiation, genetic manipulation, or any other kind of willful, deliberate, malicious, and premeditated killing; or committed in the perpetration of, or attempt to perpetrate, any revolution, assassination, murder, kidnapping, treason, espionage, sabotage; or perpetrated as part of a pattern or practice of assault or torture, is murder in the first degree and is strictly prohibited without the written consent of an appropriate authority. Any other murder is murder in the second degree.
—09 RCJ § 1111: Murder

“Chief Tower? Chief Graven Tower? Is that you?”

He could hear the incredulity in the detector’s voice as she addressed him and grinned to himself as he stood up from where he’d been attempting to examine some of the possible sight lines that Baby was displaying for him.

“None other.” He pretended not to know who it was. “Wait, I know that voice. Hildy, is that you?”

“None other. Now get your grubby mitts off my murder scene! I’m right over you.”

Tower craned his head upward. Sure enough, a black-and-white TPPD aerovar was descending slowly with its nose pointing north, having come from the opposite direction. “You got your zoom on if you can see my hands from up there.”

“Your augment sent me the uplink through Victor when I asked why there was a soldier boy crashing the scene.”

“So the kids are playing well together? Isn’t that nice. Get on down here and join the party. I think you’re going to like this one.”

“Not a jumper,” he confirmed. “Definitely not a jumper.”

“Well, where is the body? I don’t see a body. You didn’t do anything with my body, did you, Chief?”

Tower shook his head, and with some difficulty, managed to stifle the first three responses that sprang into his mind. Was she flirting with him? He was tempted to respond in kind, and he knew how unlikely it was that anyone downtown or at base was listening in, but regardless, they were being recorded and it was only two months since the last base-wide series of sexual harassment lectures.

He shuddered involuntarily. No woman, not even the lovely Detector Hildreth, was worth the interminable weeks of re-education that would follow an on-duty comment deemed improper by Bio Resources. The suspicious bureaucrats of BR were always on the alert, they liked nothing better than to get their hands on an officer, and they could always be relied upon to put the worst possible interpretation on even the most innocent remark.

“Not guilty, Detector.” He cursed himself for his cowardice and glanced into a window that was just clean enough to let him see his reflection. Thanks to the tac-jacket, he looked dangerous, maybe even dashing. Digging into his pocket, he found a breath-enhancement pill and popped it into his mouth. “Tower out.”

The signal clicked off. Tower swore it was an actual sound, but the techs told him he was over-imaginative. A moment later, the whine of the grav-plates on Detector Hildreth’s aerovar increased in pitch as she, or more likely, her augment parked it on the street, nose to nose with Tower’s own vehicle. Lacking the armor, the anti-personnel rockets, the Meteor air-to-air missiles, the 15mm gun ports under the stub-wing slots on either side, and the pair of Degroet Tactical M165-20 cannons in the nose, her black-and-white vehicle looked sleek and stylishly feminine in comparison with his more heavily armed, dark-grey machine.

“Well, Chief Tower, it seems we meet again. What brings MCID to this humble civilian crime scene?” Derin Hildreth, Hildy to her friends, colleagues, and one-time professional role-play team members, was a little shorter than Tower. She was pretty, slender, and athletic, and wore a thicker, sleeveless version of his tactical jacket. A standard department GHK slug-thrower rested in a brown leather holster that was slung low over her grey pants, and a yellow-triggered shocker that looked like a toy was attached to her belt on her right hip. Underneath the tactical vest she was wearing a white collared shirt. She had a small black satchel slung over one shoulder, and was using both hands to twist her medium-length blond hair back into a looped ponytail as she walked toward him.

“Would you believe an inter-subsector war looms on the horizon and solving this crime may help us stop it and save tens of millions of lives?”

“Not even a little bit,” she said with a grin. Then the amusement vanished from her face as she stared at the dark smear on the ground. “Oh, no. That’s from a military grade disintegrator. That’s why you’re here, isn’t it! Don’t tell me you guys have something that can pick up the discharge!”

“If we did, you know I can’t tell you.” Tower spread his hands. “And, just so you know, we usually refer to them as disruptors.”

She narrowed her eyes, which he couldn’t help notice were an attractively bright shade of green and glanced at his armored var. “Do you have it in there? Chief, if you have evidence that would help me ID the weapon, I would truly appreciate it. I really would.”

“She’s just shameless, isn’t she?” Baby practically hissed as Hildy patted his arm and started to slide past him. “What are you doing, Tower? Change the subject!”

She was right. He had to distract the detector and fast. Hildy was already making her way toward the driver-side door and he couldn’t remember if he’d locked it or not. Then she froze and cocked her head to one side. She was listening to her augment, he realized. Then she turned around to face him.

“Victor says there is a ninety-seven percent possibility that the vic was killed by a disintegrator given the chemical composition of the latent energy particles. Or rather, a disruptor, I should say.”

Tower tried to nod in a knowing manner, hoping that Hildy wouldn’t press him further about his nonexistent device.

Did you do that? he subvocalized, knowing that Baby could hear him.

“Yeah, I cycled it through the TPPD comm-int; her Victor has no idea where it came from. Those civilian intelligences are cretins.”

He glanced up and realized that Hildy had her hands on her hips and was asking him something.

“Did I smell anything when we got here? No, I didn’t, but I’ve seen that sort of thing before.” He indicated the crude body-shaped smear. “The Keleboshi had a few vehicle-mounted disruptors. They burned through too much energy to be relied upon in a firefight, and their power sources were too big to carry around without a gravsuit, but for a one-shot kill, a micro-disruptor is hard to beat if you can get close enough to your target.”

“You’re a combat vet?” She looked up at him with a speculative look on her face.

“I saw a bit of drama here and there. Among other things, I was with the security detail on Basattria.”

“Wow,” she said. Eleven years later, even civilians still remembered what went down at the consulate on that godforsaken planet. “Talk about being at the wrong place at the wrong time! I didn’t know there were any survivors.”

“A few of us got out. Not enough.” He shrugged and firmly kept his thoughts away from the one individual in particular who hadn’t. “The point is, we know what the weapon was, probably, but we don’t know why or even who, yet. And Baby tells me that based on what the witness says he didn’t see, the killer may have been cloaked.”

“Cloaked? That doesn’t sound like a run-of-the-mill mugger. Neither does a disruptor.” She took him by surprise when she raised her eyebrows and grinned hopefully. “I thought I heard a ‘we’ in there, Chief Tower. Would MCID be willing to assist on this one instead of taking over the investigation?”

“Oh, for the love of Our Father, Tower, are you really going to hold her hand on this one?”

Shut up, Baby. We could be dealing with pros here, maybe even spec-ops. It’s legitimate, you know TPPD isn’t equipped to handle spooks or soldiers. Just make the request.

He shrugged and feigned indifference. “We’ll see about that. Let’s find out who our vic was first.”