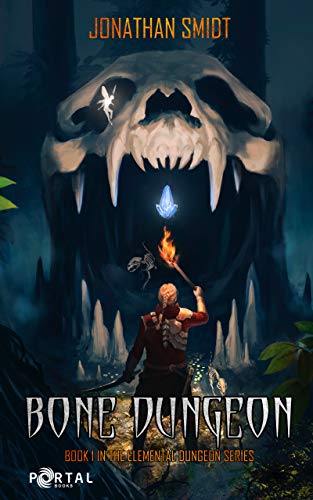 Ryan ran afoul of an overzealous church in his fantasy world. But after losing his head, the church’s goddess, as an apology. brings Ryan back as the heart, soul, and guiding mind of a dungeon. Aided by the celestial fairy Erin, he now builds and maintains the premier dungeon for would-be adventurers, complete with devious traps, skeletal monsters, and a strange sense of fair play. But bad bone puns and an actual underground fight club for monsters keep Ryan unaware of the goddess’s true plan for him–as the trainer for the paladin chosen to reform her church.

Johnathan Smidt’s Bone Dungeon is the latest in a series of quirky litRPG fantasy web novels hosted by Royal Road to make the jump to print. Like many of its contemporaries such as Everyone Loves Large Chests, Bone Dungeon flips the script on the tried-and-true adventuring party by shifting the point of view. In this case, what if a dungeon was alive, with a guiding mind? What would that be like? The result, like many gimmick novels, is a thorough examination of what many readers might think a one-note gag, combined with a deep dive into the game mechanics of Smidt’s fantasy world. But what should have been Exposition: The Novel is enlivened by the interplay between Ryan and his assistant Erin, adding notes of humor and mutual infatuation to the nuts and bolts accounting needed to turn a dungeon from a hole in a wall into a full-fledged raid encounter.

And, yes, that includes Skeleton Fight Club, another should-have-been one note gag that has plot and character relevance, as Erin does not always approve of Ryan’s methods.

Perhaps the most striking aspect of Bone Dungeon is just how innocent the story is. No matter if the writer is Russian, Chinese, Japanese, or American, web novels and litRPGs tend to be colossal exercises in wish fulfillment, especially when romance and sex are involved. 2018’s mix of raunch and harem was fueled in part by the rise in popularity of these stories. Instead, Erin and Ryan are stricken with a case of puppy love, with both wanting to bring out the best in each other and in the dungeon they are building. Much of Ryan’s character growth is driven by trying to avoid losing Erin’s approval and living up to her high esteem of him without letting himself be whipped. But both remain unaware of each other’s affections. It’s innocent, it’s cute, and it’s blissfully devoid of bawdiness.

But Bone Dungeon’s good nature is not limited to Ryan and Erin’s growing partnership. Keenly aware that his survival depends on a sense of fair play towards the  adventurers that quest through his halls, Ryan enters into a strange and unspoken agreement with the local Adventurer’s Guild. His challenges make their recruits stronger, and their failures fuel his own growth. Ryan and Erin gleefully look forward to how each party navigates the bone-laden halls and skeletal monsters, and how the adventurers grow through each encounter. A strange sense of cooperation builds between dungeon and adventurers–including the aforementioned chosen one–which comes in handy as even dungeons can face dangers of their own.

Bone Dungeon is a delightful and quick read, and, at a time where most young adult stories are choked by the fantasies of burnouts and crazy cat ladies, it is a rare story appropriate for ages 9 through 99 that avoids being twee.