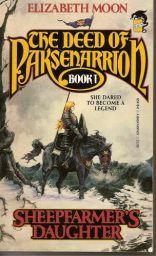 Back in July, I reviewed the military fantasy anthology Shattered Shields. I have mentioned that Elizabeth Moon’s “First Blood” stood out enough that I would search out more.

Continuing education in Cleveland, OH in late October meant that I had to stop at Mac’s Back Paperbacks. I picked up a used copy of Elizabeth Moon’s Sheepfarmer’s Daughter, book one of The Deeds of Paksenarrion.

I remember seeing this book on the shelves at the time. I was not reading much in the way of new fantasy at the time being suspicious of the avalanche bad Tolkien derived fantasy (no offence to J. R. R. himself).

One could be forgiven at the time as the first thing you saw inside the book was this blurb by Judith Tarr:

“This is the first work of high heroic fantasy I’ve seen that has taken the work of Tolkien, assimilated it totally it totally and deeply and absolutely, and produced something altogether new and yet incontestably based on the master…This is the Fourth Age as it has to have been.”

The back cover emphasizes that Elizabeth Moon joined the U.S. Marine Corps in 1968 and completed both Officers Candidate School and Basic School, reaching the rank of 1st Lieutenant during active duty.

The story starts out with Paksenarrion, the sheep farmer’s daughter running away from home to escape an arranged marriage. She joins as a recruit in a mercenary company. The first 40 pages are about training. Moon puts in a lot of detail into the training of raw recruits. Paks as she is known becomes the object of unwanted attention in an incident never fully explained. A veteran attempted to force her sexually and when the guards arrive he is down and she is bloody. A court inquiry clears her of assault charges with two fellow recruits expelled from the company.

Lots of detail is given to the journey south for her first campaign. Paks is wounded in one battle. The next year has a garrison in one fortress forced to surrender to overwhelming forces of a rival mercenary company. Given parole while waiting for ransom, Paks and two others are out gathering berries when the fortification is attacked by the forces of a nefarious character known as the Honeycat.

Paks and her two companions travel south to warn Duke Phelan, commander of the mercenary company. The company races north along with the rival mercenary company to relieve the siege of the fortress.

The rest of the book is the campaign the next year to hunt down the Honeycat and destroy his power. I began to lose some interest after 300 pages. Along the way we find that Paksennarion might be some sort of paladin, given power by a particular god. The Honeycat was a well done character. He was not a near omnipotent dark lord but he was supreme bastard.

Moon’s prose moves along well for the most part. I have been told the second and third books are better as this is the origin story. Moon knows a military unit works. This aspect is better as military fantasy than Glen Cook’s Black Company. The supernatural or magical element is low key. There is some magical healing once in a while.

My big problem with the book is the idea of females fighting in a mercenary company alongside men as if there is no difference. I have laid out my views on fictional femizons. The suspension of disbelief is stretched to the breaking point with female soldiers as good as the men in hand to hand combat. I have issues with the idea of mercenary companies as an elite. As John Cale said, mercenaries are willing to fight for you but not die for you.

So, Moon is a fairly good writer from a technical standpoint. I would give Sheepfarmer’s Daughter a 3 out of 5 harmonic chromosome rating. Will I read the other two books in the series? Time will tell.