ONCE MORE INTO THE BREACH! 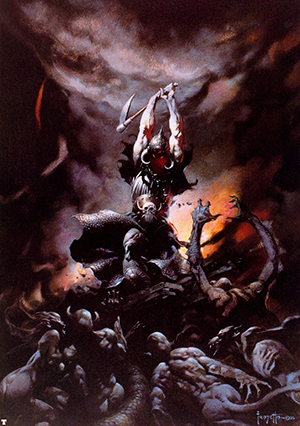 It’s Monday! Which can only mean one thing: DADDY WARPIG IS BACK TO WIN ENEMIES AND INFLUENCE PEOPLE!

Now, I make people mad. (You may not have noticed.) But, really, this isn’t my fault.

I’m such a polite and mild-mannered guy.

If me saying “Literary SF is a niche sub-category of Fantasy & Science Fiction that appeals to a smaller audience than stories of adventure and heroics.” makes you mad, that’s kinda on you. It’s true, and accept or deny it, it remains true nonetheless. Even if you love Lit SF, the statement continues to be true. Even if you love Lit SF stories that were deceptively marketed as Hard SF (or anything else), it’s still true.

Lit SF stories—obsessed with seriousness, acceptance as Literature, and what Literary souls misleadingly call “Realism”—are pretentious garbage. Love them or hate them, they remain the same: a niche sub-category of Fantasy & Science Fiction that appeals to a smaller audience than stories of adventure and heroics. Sell them as Hard SF, Epic Fantasy, or New Wave (and Lit F&SF has been sold as all three), they’re still garbage that poisons the genre they infest.

This world, and the people in it, love themselves some pride. They love feeling morally and mentally superior to others, and will pick even the smallest and stupidest distinctions to justify that.

Modern Literature is a genre of pride. It exists so stuffy and narcissistic professors, critics, and readers can gratify their pride by writing or championing works that Regular Joes—even highly intelligent and well read Regular Joes—find stultifying and dreary, the kind of stuff that Orson Scott Card sneers at as books designed to kill schoolchildren’s love of reading. (Lit F&SF at least has the edge here: F&SF is chock full of cool concepts and compelling ideas. It takes an exceptionally clueless berk to turn that into something soul killing.)

Any genre predicated on aggrandizing the author—whose primary purpose is making the author seem intelligent, erudite, or morally superior—is a genre of pride. And that’s the sole purpose of LitFic: making the author look good. The audience is an afterthought, their needs rarely considered, if ever.

People who sneer at heroics are writing Lit F&SF. People who say things like “stories of interplanetary imperialism and destruction” are “the stock in trade of the hack writer”, ditto. And people who loathe and despise Christianity and Christians are almost guaranteed to be peddling poisonous Lit F&SF, no matter what sub-genre they may claim to be writing in.

Being boring, preachy, and perverse is the entire point of these works—if they were exciting, adventuresome, and wholesome, anybody could like them, anybody would read them, so how could you feel superior to them? Only if they repel the audience can you claim you’re better than they who refuse to read these pretentious paeans to pointlessness and prurience.

The search for validation as “real art” is almost always driven by pride, driven by the need to appeal to the Literary or Artistic set for approval, and thus feel elevated and important. Ironically, despite claiming to be champions of an art form, every action Serious Writers / Artists take to Elevate The Art Form only degrades and damages it further. It corrupted cinema, it’s befouling video games, and it nearly destroyed Fantasy & Science Fiction.

The search for Literary Validity was the single greatest cause of the descent of traditionally published SF into the audience-repelling morass of preachy, perverted, and pretentious crap it is today.

Subversives are subtle, and they start out small. A hint of perversion here, a touch of Literary language there. But always, always they push for more and more, and their works grow ever-more degraded.

You may like their stuff, at least the earlier works before the rot became really obvious, and you almost certainly love the genre they are parasitizing. But just because a book has rocketships, neat aliens, or cool ideas doesn’t mean it’s good Sci-Fi. It may just be using the veneer of that which you love to wallpaper over something rotten, to trick you into loving that which is odious and poisonous.

“Realist” Lit SF can often be mistaken for Hard SF because its defenders claim the same virtues: realism and accuracy. They deliberately obfuscate the very real differences between the two.

Works like this NEED to be criticized, NEED to be opposed, NEED to be exposed. Authors who write this garbage, ditto. And editors who published this trash (even if they were well-meaning but naive) likewise need be called to task. Even if it stings, even if you love the work, it must be done. This is what Literary Criticism is FOR.

So be nice to your Friendly Local Renegade Literary Critic. He may actually be targeting works or ideas that NEED evisceration.

Even if everyone else is convinced otherwise.