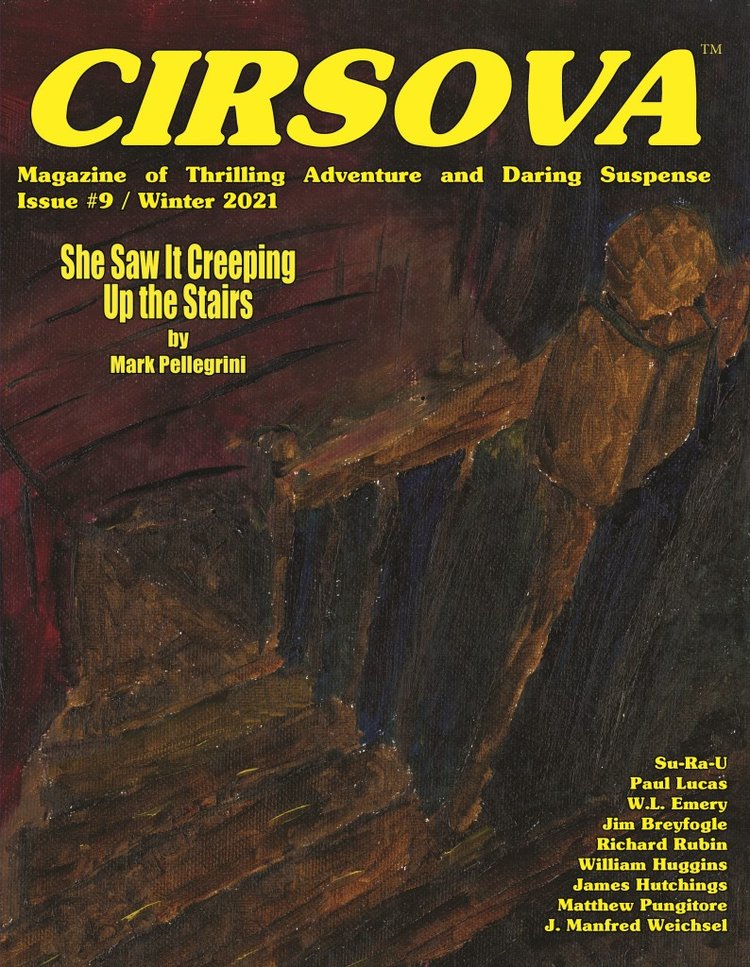 The latest issue of Cirsova, Winter 2021 (Vol 2, No. 9) arrived recently and made up part of this week’s reading.

“For We are Many”: Zak travels across alternate universes eluding and destroying avatars of himself who are generally evil. He comes face to face with a pursuer who he calls Nemesis. Zak finds that he is perpetrating even more evil with each act.

“The Wreck of the Cassada” by Jim Breyfogle is in his popular “Mongoose and Meerkat” series. The duo are hired to lay claim on a wrecked ship for salvage.

“Wychryst Tower” by Matthew Pungitore: I have written on Matthew Pungitore’s fiction last year.   Pungitore mixes gothic atmosphere with cosmic intrusions. This tale starts in the Dominican Repubic and ends in cursed mansion.

“She Saw It Creeping Up the Stairs” by Mark Pelligrini: Horror story with young Lisa as the focus who notices something is not right in her grandmother’s house.

“Fail Early, Fail Well” by W. L. Emery: Vinellius’ job is to make sure that bad projects fail sooner than later. This reminded me a little of 1950s Philip K. Dick.

“Thorwyn Stapledon and ‘The Mellifluous Phoenix’” by Su-Ra-U: A science fiction fan in the 1970s puts together an anthology wherein the writer takes a hallucinogenic drug. Soviet espionage is involved.

“To the Sound of a Silent Harp” by William Huggins: Ciaon is an enforcer for a drug dealer in the future that sells an alien drug. Once you take the drug, it takes over your life.

“Queen of the House” by J. Manfred Weichsel: A door to door salesman peddles a cleaning device that promises to get rid of everything. He won’t give up. This reminded me a lot of Philip K. Dick.

“The Creation of Science Fiction” by Michael Tierney: This is a non-fiction piece on editor Robert Davis of All-Story Weekly. He brought up Edgar Rice Burroughs, Ray Cummings, A. Merritt etc. A very influential person.

Cirsova is delivering a wide range of fiction. There is old fashioned adventure science fiction, cosmic horror, Bradburyesque horror, Philip K. Dickian science fiction etc. There is something for everyone.