Taking up where the last session report left off.

Sir Percival Jones, 54577B, Age 30, Scout (3 terms, mustered out), Pilot 1, JOT 1, ATV 1, Vacc Suit 1 Elect 3. He’s cash poor, but, a lucky chap who’s survived 12 years as a scout and the service appreciates it by loaning him a ship. He’s playing Galahad on for a mother (Astrid Anderson) and child (Frelser Anderson) on the run from the Psionic Institute authorities.

Hugo Abe, 647897, Age 26, Other (2 terms mustered out), Auto Rifle 1, Cudgel 1, Forgery 1. Something of a thug, he’s looking to make himself scarce from local organized crime groups; perhaps start a new life on the off-world colonies. Turns out he’s been bonding with Frelser and helping him during his seizures during jumps.

While Hugo and Mirin plot their assault on the villa, Percival begins work on building a psionic ability detector with the ultimate goal of building a psionic shielding device. As he’s doing this, Astrid stops by to pay him their agreed upon fee as she’s elected to join a wagon train as a cook and plans to lose herself and Frelser in the wilds of Sytorgus far away from Imperial agents.

Meanwhile Hugo and Mirin plan their raid. At first they are surprised by the design of the villa they need to raid — a double decker space needle with an elevated air/raft landing platform. Researching the villa and its own they discover that he is a legislator and expected to be at home over the next couple days drafting legislation for a psi amnesty — to allow the psionic guerrillas to surrender without consequence. Knowing that such an amnesty is unpopular, they have Patricia can in favors to set up a protest outside the government offices. They use the protest as a distraction to steal the caterers air/raft used to deliver supplies to the mountain abode. Dividing their force, they plan a two pronged attack. One group of soldiers is to set up a diversion and covering fire by setting up a LMG that can bear on the houses bottom entrance. The second group (including Mirin and Hugo) is to land the air/raft on upper platform and enter the house using the elevator. 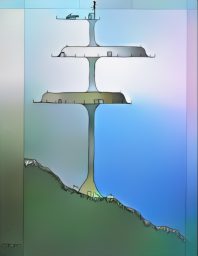 It goes like a charm with surprisingly little resistance. As the LMG opens up on lower door, they land on the platform, intimidate the butler, and take the elevator down to the lower level. Exiting the elevator they surprise a group of men in the central courtyard. One of the men is Wolfgang Bergersen, the legislator who initially puts on a strong front but, quickly is cowed in the face of shotguns and autorifles.

Across the courtyard, through an interior window they see more figures in some sort of activity. Two of the figures draw weapons and run into the courtyard only to lose surprise and become intimidated by Mirin threatening to kill Wolfgang. They surrender and drop their guns. Hugo and Mirin order them to produce Patricia’s brother Jonah. They refuse and Mirin indicates his displeasure by dropping one with a shotgun blast. Hugo then marches the remaining men at gunpoint into the activity room. There to their shock, is a twitching figure seated at a table, wearing some sort of helmet enclosing his whole head with multiple cables jacked into some sort of nearby electronic device. Hugo orders them to take unhook Jonah but, they protest that it is too dangerous to unhook him. Impulsively, Hugo tears the helmet off of Jonah who immediately goes unconscious and into shock.

Hugo carries Jonah out and the general extraction begins. One of the technicians impedes them protesting “You may as well kill me, if you take him.” When asked why he says “Millions will die if they take Jonah. The Jump Spiders are coming. Only our training and protection can save him.” Okaaay. They decide to bring the technician with them too for further interrogations. They flee in the air/raft stopping only to drop Wolfgang off into the middle of the rioting protesters. They then meet up with Patricia at an improvised bolt-hole. There the technician tells them “Jonah has so much potential, he needs to finish his training, only those with such potential can possibly protect us. The Jump Spiders are coming and we have already felt the screams of millions as the worlds die. Already the first waves are killing those with psionic potential. To have any hope we need to protect the gifted, especially those with the potential of Jonah.” Patricia is having none of it, with much blaming invective directed at the technician, she pays the players the promised 300k, loads Jonah into a ground car and heads out. And, there we left it with Mirin and Hugo heading back to the Nellie Gray.