So. I haven’t posted session reports since Jeffro, as a player, has been posting reports of our sessions. For a summary of how things have gone see these posts:

However, I thought it time for an update of the overall course of things.

The party has split. We have a Freetrader and a Scout. However, due to scheduling issues the Freetrader hasn’t had a second session. Things keep coming up and life is like that sometimes. Though, I am excited to see where that thread leads. The table below gives a short summary of how things have proceeded. As you can see the Scout Group is over seven weeks ahead in time from the Freetrader Group. This may pose a problem when we play the Freetrader. What happens if the Freetrader Group jumps after the Scout and intersects them back in the timeline? Won’t that disrupt what are now future events? Well, that’s almost a science fiction sort of concept right there now isn’t it? But, I doubt it will happen. Why? Because I expect that once we play out the Freetrader events at Mazar those events will generate their own decisions that will go elsewhere. Perhaps the Freetrader and Scout threads will intersect at some point and we will deal with it then. But, if they do not, it is not a loss in my book, far from it. Because having multiple groups bopping around Subsector Narzenia allows exploration of more places and aspects of the subsector. Things I have not thought about yet. Who knows where it will lead? But, I bet it will be interesting. 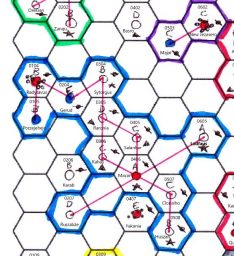 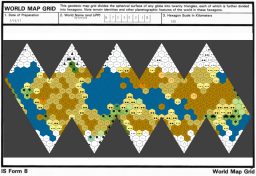 Sir Percival Jones, 54577B, Age 30, Scout (3 terms, mustered out), Pilot 1, JOT 1, ATV 1, Vacc Suit 1 Elect 3. He’s cash poor, but, a lucky chap who’s survived 12 years as a scout and the service appreciates it by loaning him a ship. He’s playing Galahad on for a mother (Astrid Anderson) and child (Frelser Anderson) on the run from the Psionic Institute authorities.

Hugo Abe, 647897, Age 26, Other (2 terms mustered out), Auto Rifle 1, Cudgel 1, Forgery 1. Something of a thug, he’s looking to make himself scarce from local organized crime groups; perhaps start a new life on the off-world colonies. Turns out he’s been bonding with Frelser and helping him during his seizures during jumps.

Jump today from Kahas to Sytorgus. Rumor has it that the Psionic Institute coup failed on Sytorgus and the Empire is now spit into two factions: those aligned with the Psionic Institute and The Empire of Reason and those opposed to the Empire and, most importantly, opposed to a mind-controlling cabal running their government. Expectation at Kahas is that forces from one, another, or both factions may arrive soon as the system, along with neighboring Salanhar form the natural boundary between the factions. Fighting is expected.

After consulting with Astrid (who is still looking for a place to flee with Frelser) they decide to jump for Sytorgus which is perceived as safe from psi influence. After leaving jump space, they spot a small fleet thrusting away from the planet. The expectation is that it is a fleet sent to occupy Kahas. Landing at the starport, they observe a similar sized fleet still on base so a substantial portion of the overall force is being sent out. During the jump, Frelser went almost immediately unconscious. After leaving jump he comes to and Hugo talks to him. During the jump Frelser had the same dreams of the monsters on the shell who are themselves being menaced by larger monsters. Frelser, says “The monsters are scared and keep running and running but, they don’t know that running won’t work to save them.”

Sytoryus is a relatively large planet with a thin atmosphere (requiring breathing apparatus). It has a mall agricultural area and is mostly mountains and desert. The well-to-do farmers occupy the few agricultural areas but, most of the population consists of subsistence level scrounging moving through the mountains and deserts in ATV caravans. After landing at Sytorgus there are rumors of psi partisans still about, and the place is fortifying: revetments, sandbags, and militia drills.

Percival trades his data regarding the defenses and fleet observed at Karab for a double turret along with a laser, sandcaster, and basic software to operate the turret and weapons (while also keeping secret what they saw happen to that systems star). While Percival is overseeing the turret install, Astrid along with Hugo and Mirin go into town to look for opportunities. Astrid finds a job as a chuck wagon cook in one of the ATV caravans which she thinks will make it harder for the Psonic Institute to find her. While Astrid in investigating her job opportunities, Hugo and Mirin are approached by a young woman, Patricia Jensen. She has noticed that they are one of few out of system ships to arrive lately and offers them 300,000 credits to rescue her brother who is being held captive by psi partisans. Prior to the armed conflict starting her brother had been tested for psionic potential by the Institute and abducted, much like what almost happened to Frelser. The local military doesn’t believe her story and won’t help her, and ultimately has enough on its plate already. The brother, she says, is being held in a mountain villa owned by a local politician with ties to the military.

As they are discussing the situation with Patricia, a doctor and two military policeman approach. The doctor claims that she is an escaped mental patient. The policeman grab her and begin dragging her off toward a nearby car. Patricia starts screaming that they are going to kill her. At this point Hugo unloads on the car with his autorifle (carrying of which is allowed here at law level 1), causing the driver and passenger to bail out and take cover behind telephone poles and garbage cans. Mirin freezes the doctor in his tracks by firing his shotgun in the air. Mirin then fails to grapple the doctor and the doctor responds with some sort of mental attack which hits Mirins dexterity. At this point the military guards let the girl go and stare about dazedly. Mirin then drops the doctor with a massive shotgun blast to the chest. Mirin then approaches the dazed policeman while Hugo drops both the driver and passenger with his autorifle. Talking with the guards they clearly don’t know what is going on and are compliant. Hugo and Mirin lead the guards and the girl through a crowded market, trying to evade followers (and the law), and eventually end up at a diner. There they convince the two military police that their chain of command is compromised and that the path to glory and redemption is for them to help rescue the girls brother. The miltary police call their friends who arrive with three more military police, a truck, and more autorifles.

I swear the firefight reminded me of this classic Donna Barr illustration. Straight out of Traveller. 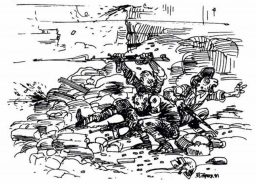 Next session will certainly be an assault on the villa.