I you have read my previous columns, I have covered a fair bit of background for my Classic Traveller game. So, how has it played? Pretty good so far. We’ve only had two sessions but, I am excited to see where the next ones will go.

The first session starts on Ladfaus capital of the newly declared Empire of Reason. In fact, play begins at the starport (Class A) with the characters watching King Aethelred declare himself emperor and that what was once the Kingdom of Ladfaus will now be known as the Empire of Reason. Everything will be run on a rational basis. The first step of which will be the order of all citizens to report to the Psionics Institute for testing to evaluate their psionic potential. The king, now Emperor, seems a little vague and shaky and keeps looking off camera. Our characters view this announcement with some suspicion but decide to go check out the Psionics Institute to see what’s up. But first, who are out characters?

Shet “Shit” Rolla, D48627, Age 22, Marine (private 1 term mustered out), Cutlass 1, Tactics 1. Stong but, not too bright, newly thawed from low passage. He just wants to get back to his homeworld but, he can’t quite recall which it is. All he knows is every time he wakes from cold passage and the world is not his own he wants to punch someone. He’s in cuffs and escorted by police to wait in the queues at the Psionics Institute.

Sholto Abbams, 325BED, Age 38, Navy (Ensign 4 terms, retired),  Admin 1, Navigation 1, FwdObs 1, Medical 1, Gunnery 1. The Navy’s oldest ensign, a bit feeble and never promoted but, given his status as a marquis (well, third son) he couldn’t be kicked out either. He’s competent but, really prefers his bathrobe and slippers.  He goes to the head of the line dontcha know.

On the way out of the Psionic Institute, Sholto takes exception when he’s knocked aside by a woman running from the institute with her young son in tow. Close behind follows two guards from the Psionics Institute. Finn watches while Sholto interferes with the pursuit. “I say, what’s this, explain yourselves! Don’t you know who I am!” The woman cries for help and that they were trying to kidnap her child. The guards insist to Sholto that they have orders to retain the child. “Under who’s authority? This is most irregular.”

Meanwhile Shet is looking for a fight. He breaks out of his manacles and starts a brawl with the police restraining him. The crowd moves back and forms a circle. The woman keeps crying for help. People in the crowd start murmuring about what’s going on. The guards, feeling stressed, club the mother out of the way and try to grab the boy. Sholto interferes and tries to club them with his walking stick. This does not turn out well, as one guard immediately cold cocks Shoto with the first blow. This inspires Finn and Percival to enter the fray. They grab Sholto’s inert form and hustle off the woman and child just as the crowd loses its patience and mobs the guards. Shet follows them just for kicks.

Back at the starport, the woman and child take refuge on Percival’s scout ship while Finn, fills out his crew with Sholto as medic; an NPC Poul der Löwe as steward (Löwe is a retired merchant who buys a share of the ship with the freetrader he rolled), and Sophia Williams (26, mustered out Navy Lt.) as engineer. Shet, negotiates another low passage with the agreement not to thaw him out unless he’s home, “Not unless you wanta get punched.”

The next day, Sholto is still recovering from his wounds and Finn is fueling up his ship when the police come asking questions regarding the previous day’s riot. They are searching all the ships in port for a fugitive woman and child. Percival “I’m sorry officer. I can’t open the airlock. The framastat has shorted. Come back in a couple hours when I have it fixed.” Delaying the cops, both Finn and Percival launch off planet against the orders of the port tower. Note: the only planet on Space Lanes is Mazar, two parsecs away. Percival, with his jump 2 scout will make it there in a week. Finn has to stop in deep space, transfer fuel, and then jump for another week’s travel.

Sir Percival Jone, 54577B, Age 30, (scout 3 terms, mustered out), Pilot 1, JOT 1, ATV 1, Vacc Suit 1 Elect 3. He’s cash poor, but, a lucky chap who’s survived 12 years as a scout and the service appreciates it by loaning him a ship. He’s playing Galahad on for a mother (Astrid Anderson) and child (Frelser Anderson) on the run from the Psionic Institute authorities.

Hugo Abe, 647897, Age 26, Other (2 terms mustered out), Auto Rifle 1, Cudgel 1, Forgery 1. Something of a thug, he’s looking to make himself scarce from local organized crime groups; perhaps start a new life on the off-world colonies.

Percival Jones piloting the scout ship Nellie Grey arrives in the Mazar system a week ahead of Finn’s Chance. The jump from Ladfaus was a bit stressful with the child, Frelser Anderson, falling into a screaming seizure and ultimately a coma as soon as the jump button was pushed. Arriving in-system the ship finds itself in the middle of a war zone. Competing factions of the navy are duking it out around the small planet of Mazar and radio traffic is warning all non-combatants to leave the space nearby. A half dozen ships are now thrusting toward the system gas giant, a large blue ringed planet, four days thrust out (at two g). Frelser’s mother Astrid notes that leaving jump space Frelser also comes out of his coma. Percival tries to boost Frelser’s morale by showing him the cockpit and space battle but Frelser starts screaming again about how everyone is dying. Percival decides he needs to brave landing at Mazar but, fails a piloting roll and the Nellie Grey ends up in the middle of the naval scrum, taking one random laser shot to her hold which wrecks the ATV (which is just as well in that I made a mistake in allowing the substitution of an ATV for an air/raft as an ATV much too big to fit in a scout ship’s available space). 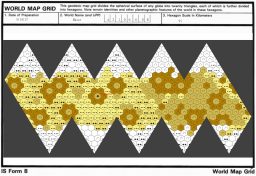 At Mazar, there is clearly combat ongoing at the naval base (located in a large crater) and debris from the base’s magazine exploding is still settling to the surface in the planets low g. At the civilian “Gut” surrounding the base, Percival meets two characters: Hugo Abe, a rather disreputable type who is seeking passage off planet as the local gang economy has been thrown for a loop with the navy conflict and there is a lot of opportunistic violence occurring; and Mirin Beg a fairly well-to-do retiree from the Main Star Mining Corporation trying to complete his last duty to deliver an air/raft to the nearby planet Kahas. Percival loads the Air/Raft, buys some speculative spices and leaves planet with a full ship. Then he thrusts four days out to the gas giant to skim fuel. 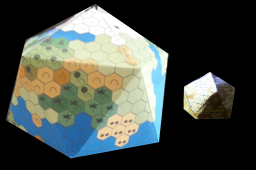 While outward bound Hugo makes friends with Frelser and asks him to draw what make him upset about the space combat. He draws a tiny battle surrounded by some sort of globe with tiny aliens/monsters walking on it’s surface which is itself surrounded by giant amorphous fanged monsters. 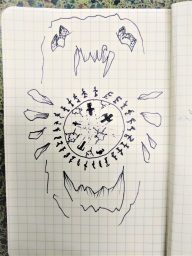 Upon reaching the gas giant, Percival successfully skims fuel and jumps out system to Kahas just one day before the arrival of Finn’s Chance, forgetting to leave a forwarding message for Finn Chen. Frelser again goes into a coma on the jump to Kahas. And, comes out of it a bit slower than last time upon arrival. Kahas is a corporate owned planet being mined for petrochemicals by Main Star Mining. Landing successfully at the scout base there, they find they have outrun the news of what has happened at Mazar and Ladfaus. Percival sees a good opportunity to get paid by the local corporate officer for the news and also to get a contract to explore the nearly world Karab. Karab is off the trade routes and not much is known about it except that Main Star has heard there are minerals there. Despite a scout base nearby apparently no scout has ever returned. At Karab, Mirin Beg repairs the ship’s hold and then heads to the employee recreational casino. He wins 100k in an afternoon before the casino cuts him off for the day. Note: the gambling rules allow for 5,000 credit bets with roll of 9 on two dice a win. Mirin Beg with a Gambling skill 2 on average will win. Both Hugo and Astrid are intrigued by the notion of leaving the Empire trade routes where they think they may be able to leave their pasts behind them. At least they hope so. 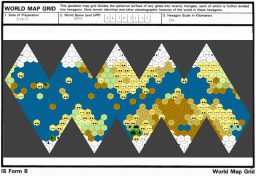 Will, the Nellie Grey and Finn’s Chance manage to hook up again? Will Astrid and Frelser find a place to live in peace? Will Mirin find a garden world to retire on? And, what is Abe looking for? Perhaps we’ll find out more in the session update. Stay tuned.