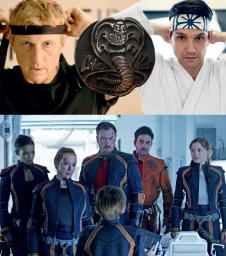 Lost in Space, Netflix’s revamp of the classic SF TV series, is so abysmally bad that there’s no end to the possible critiques one could lodge against it. The biggest complaint—and, ultimately, the only one that matters—is that it’s boring. Tedious. Excruciatingly bland and stupefying.

In fact, the only thing that broke up the boredom was my visceral dislike for all the characters. Each and every one, a Wesley Crusher. An entire family, an entire show, of people so aggravating and unlikable, that if I sat next to one on an airplane, I’d choke them out before we hit the runway. I hated them, and I hated every minute I had to spend with them.

Folks, when writing something, strive to create characters that are likable, or at least interesting. Unlikable and boring is pretty much the nadir of character design, and Lost in Space hit that jackpot each and every time.

The show was so awful, it isn’t even worth spending the time to analyze why. It was shallow, it was insipid, and by the end I was just begging for it to be over.

So let’s flip to the other TV series I watched this week: Cobra Kai. YouTube Red’s sequel to The Karate Kid—the good one, not the modern reboot—put up two free eps, and since they looked pretty good, I decided to subscribe to YouTube Red. Wait, I’m not insane: the first month is free, so I’m not giving YouTube money or anything crazy like that.

Thankfully, Cobra Kai wasn’t as bad as Lost in Space. I didn’t hate all the characters, I was interested in where the story was going and, though it’s not the best thing on television, it is pretty good, up until the very end. That last episode, though… phew. (Spoilers to follow.)

Set 34 years after the original movie, Cobra Kai follows Johnny Lawrence, the blonde pretty boy who took the lead in bullying fresh-faced Daniel LaRusso. In the years since losing the All-Valley Karate Tournament to Danny, his life has gone straight downhill. A freshly-unemployed drunk, surrounded by TV commercials and billboards for LaRusso Luxury Motors, he’s a bit bitter about where his life ended up. Fresh out of options, he decides to reopen the Cobra Kai dojo to a fresh generation of students.

Though rivals, the series takes pains to show that both characters are struggling with their own set of problems, and both deal with them badly. Drunk one night, Johnny spray paints a penis on one of Danny’s billboards, and Danny retaliates by manipulating Johnny’s landlord into doubling the rent on the Cobra Kai dojo. On the plus side, both men become senseis to teen students, passing on their respective forms of karate.

The show dips deep into the well of nostalgia, and as usual for this kind of thing, mirrors events from the first movie. Johnny intervenes on behalf of an embattled student, Miguel Diaz, saving him from a beating by a crowd of karate-trained high school bullies. Diaz then becomes Johnny’s first student when he reopens the Cobra Kai dojo. Danny likewise takes in a student (Johnny’s estranged son, a budding juvenile criminal), teaching him the same way Mr. Miyagi did 34 years ago, wax-on, wax-off and all. And, of course, both students meet at the All-Valley Karate Championships.

Which is where the wheels come off. To Johnny’s disgust, the only students he can attract at his dojo are the losers, freaks, and nerds of the school. The series takes great pains to show how they’re the despised and belittled rejects of the high school social scene, but under Johnny’s tutelage they gain confidence and self-respect. Diaz even gets to shine in a well done karate showdown with the four bullies, pummeling them into submission in the middle of the school cafeteria.

The entire show depicts everyone as just people, no true villains and no absolute heroes. (In fact Johnny, for all his flaws, is the most consistently decent person in the show. He’s in a bad situation because of past mistakes, but tries diligently to straighten out his life and get back on track.) Yet, for reasons, the last episode needs some unalloyed villains, so the Cobra Kai kids—the losers, freaks, and nerds—are recruited for the task. They cheat, belittle opponents, and explode in rage when they lose. This, despite Johnny telling them not to. They’re all around bad sports.

The series could have been about flawed men finding peace in teaching others how to rise above their flaws. In helping kids get their lives together, Danny and Johnny could have learned how to do the same. Yet, in order to set up a White Hat vs. Black Hat final confrontation (and, apparently, to set up the show’s next season), the series abandons all the themes and events it’s been building to, in favor of a cheap ending that blesses Danny’s student with unearned grace. It’s a morally incoherent cop out. The series had so much potential, but squandered it in the last episode.

Lost in Space lasted ten hours, but felt much longer. Cobra Kai lasted just over five hours, and was a pretty fun watch, up until the bizarre ending. On about 1/1000th the budget, it’s 1000 times as fun. I don’t know that I’d exactly recommend either, but if forced to chose, I’d suggest Cobra Kai over Lost in Space any day.

Cobra Kai is about karate. Lost in Space felt like I was getting my ass kicked with karate.

I know which I’d chose.