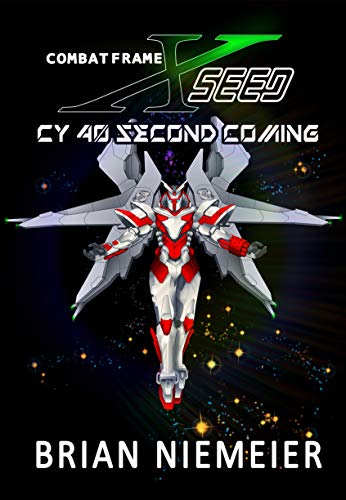 Brian Niemeier’s Combat Frame XSeed: CY 40 ended on a wicked cliffhanger with the clash of superweapons and the sudden disappearance of Arthur Wake, the mastermind of the rebellion against the Systems Overterrestrial Coalition (SOC). The sequel, Combat Frame XSeed: CY40 Second Coming, picks up in the immediate aftermath, with the XSeed pilots finding themselves on the run while the SOCs launch false-flag attacks to keep Earth from rallying to their cause. Abandoned by Wake, circumstances and belief divide the XSeed pilots, as new factions, combat frames, and even species take to the fields and skies of Earth. As the desperate defense of a free Earth heats up, Wake returns, lighting a powder keg 60 million years in the making.

As usual, the XSeed roller coaster begins from there, taking readers through a whirlwind of change as factions unite and break apart with each new development. Here in CY 40 II, the revelations are earth-shaking, as the XSeed pilots and the SOC must deal with an alien threat even as they fight each other. The tantalizing skeins of a 60 million year-old mystery first spun in the original XSeed CY1 now take shape with the addition of the alien Secta, beings who travel from one doomed world to the next to record what they find. Earth, Mars, and the space colonies of the SOC are the latest worlds to be doomed. But before a defense can be prepared, Arthur Wake and Sullia Zend, the possible reincarnation of former genocidal world leader Sekaino Megami, must deal with each other, and Arthur prefers grenades to mere words.

As always with Niemeier’s books, CY 40 II rewards a close reading. Careful callbacks to XSeed CY1 appear, adding to the mysteries surrounding Sekaino Megami and those who would challenge her. Familiar faces appear in the most unlikely places. For those readers familiar with the mobile suit genre, resonances to the Gundam series which inspired XSeed are present, including 1990s fan-favorite Gundam Wing. The threat of alien invasion offers a splash of Macross resonances as well, although thankfully no one sings here. And beneath the crackle of lasers and hiss of rockets, there is the mounting cost as the various factions of secret kings push humanity past its limits in preparation for the alien threat. Unavoidably in such attempts, there is breakage, as each of the XSeed pilots discovers, including newcomer James Trent.

So what makes the third visit to the XSeed story the charm?

Everything that I enjoyed from the previous two books is present in a clearer more concentrated form. Niemeier continues to grow more comfortable with the action and intrigues required in a martial thriller, enough to step on the gas and pick up the pace from the already brisk prequels. CY 40 II offers all the mecha action, intrigue, and surprises of the previous two books combined in half the space. Perhaps Wake’s return to SOC space might have used a little more exposition for clarification, but otherwise Niemeier deftly juggles the demands of heavy metal action, multiplying intrigue, and the constantly shifting locations required in a mecha thriller.

A dry wit comes into sharper focus. A few excellent one-liners emerge from the chatter of pilots not used to radio discipline. Fortunately, these are not delivered with camp nor does the book stop to admire their cleverness. However, the occasional relief allows the tension needed in battles between metallic knights of space to ratchet even higher than without it.

Perhaps the only thing missing from CY 40 II is the growing collection of mecha art and profiles currently hosted on Niemeier’s blog. The art and backstories for each mecha design are fascinating, and a profile or two of the most prominent mecha in each book would be a welcome addition to flip back and forth between. The visual element from these designs set XSeed apart from other military and martial science fiction series taking inspiration from familiar works. It wouldn’t hurt to lean into that more.

More XSeed is on its way, set even further into the future, and, from hints dropped on Niemeier’s blog, it’s a future of war and platypuses. Until then, CY 40 II and its page-turner prequels supply enough heavy metal mecha action to hold readers over.