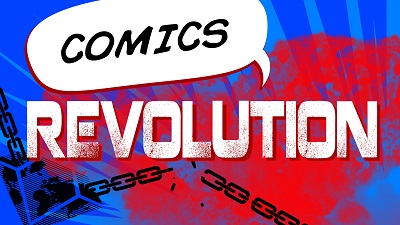 Today’s guest post is the first of a set by David Lille about the gatekeeper of the comics market and solutions to the problems it causes. David & Liz Lillie create the Dreamkeepers graphic novel series. You can follow them on a variety of social media platforms including Gab.

Ladies and Gentlemen- it is time to invade.

The comics market is in crisis. A crisis that we can–and must–exploit, for the holy virtues of creativity, capitalism, and culture.

Some blame social justice convergence at Marvel–others point the finger at customers. But whatever the cause, comic stores are thrashing to stay above water.

Some of the oldest comic shops on the continent closed their doors forever, succumbing to failure- and, on their way out, blaming Marvel.

Desperate comic retailers finally lashed out against Marvel’s gimmicky shake-downs, signing on to an unprecedented boycott.

Rumors are swirling at ScreenGeek that behind the scenes, Marvel sales are so catastrophic that the Disney Overlords are sharpening their axes.

Castalia House, reporting on all this, reveals that the hit YouTube channel Diversity & Comics may transition from deconstructing Marvel, to outright competing with them.

In the past, comic shops formed a rigid closed circuit with the monopolistic Diamond Distribution.

Diamond is, in the words of comics reporter Jude Terror, a “distribution monopoly [that] enables Marvel and DC to churn out endless gimmick-based garbage to dwindling readership with no economic repercussions because they control the entire market.”

Diamond eliminated the competition during the brutal Exclusivity Wars in 1995. There used to be dozens of distributors serving comic shops–

And they were all mercilessly crushed.

But it gets worse.  Not only does Diamond alone control the ring, they have a dog in the fight.

This cronyism has enshrined a perverse set of incentives spanning all of comics culture.

To retain exclusive access, Diamond wants to keep Marvel and DC from looking at greener pastures–and Diamond have total control over the retail landscape. So they make sure it’s landscaped just special for Marvel and DC, without any viable competition having a chance to erode their agreed-upon market share.

No matter what Marvel and DC produce.

No matter what customers think of it.

To get anything, store owners are forced to order minimum quantities that far outstrip demand, and eat the losses.

It was a living.

Retailers are discovering they can no longer passively sign off on Marvel’s product line and expect to keep their doors open. Pure necessity is jolting them awake.

Whether you blame the comic industry’s woes on milkshake-guzzling vacuous hipsters or decades of rigging under a dystopian distribution monopoly, one thing is clear. Like Libya after the fall of its ironclad dictatorship, chaos is coming.

Marvel was the unquestioned foundation of everything. As it cracks, the comic shop Direct Market will become totally destabilized.

In this environment, with fracturing power structures and shifting realities on the ground, a small, organized, highly motivated force can strike with outsized impact.

So gear up. We’re going to Make Comics Great Again.

Consider the plunder for those daring to conquer.

Authors and publishers:  You deserve to be in stores.  Your work is every bit as good, and vastly more original, than the stuff Marvel is no longer capable of selling. You–making that hit webcomic, running that record-smashing Kickstarter–you grew up in a world where you never questioned why comic shops nationwide didn’t know about your work, didn’t stock it, didn’t serve your local customers- comic shops have been so dysfunctional for so long, they probably weren’t even on your radar.

Consider this your blip.

You forged a career with your own time and talent, without any support whatsoever from a viable retail market. Well, imagine what your career would look like if nationwide store placement and mainstream recognition were added to the mix.

Retailers: Why be satisfied to choke only on what Diamond shoves down your throat? Get more. You deserve a slice of that juicy crowdfunding market pie.  Perhaps this is the first time you’ve heard that savory phrase ‘crowdfunding market.’  I’m sorry to say, you’ve been missing out.

Crowdfunding readers are the next generation of consumers. They want variety, they want novelty, they want creative authenticity, and they have found it.  And it’s not on your shelves.

Readers: You deserve a world where–shocking idea!–the market actually cares about what you want. This whole thing is supposed to be for YOU, after all. If you’re tired of Marvel editors blocking you online and gleefully degrading your culture, if you’re tired of your stores disappearing and having nowhere to browse or nothing worth browsing–then it’s time to take control.

The ultimate power in the market rests with you, and you alone–if you organize, and you want something to happen, you can make it happen. Make this comic market yours again.

And, Subcultures: You want to break the corporate stranglehold that takes away your entertainment and replaces it with homogeneous, bland propaganda? You want a chance to share something thought provoking, to carve out a corner of culture where you won’t be blacklisted and shamed just for having a slightly divergent opinion? This is where it starts.

Comics are, like no other medium, accessible. You can’t sit down and crank out a Hollywood blockbuster–but any artist can sit down and draw. And once a book is on the shelf, no algorithm in Twitter’s arsenal can keep a reader from reaching out, and reading.

Comics are the crucible for pop culture, the springboard for films and television.

We’re gazing upon the cradle of innovation for cultural content, ripe for the plucking. So if you want to reclaim some cultural relevance? The place is here and the time is now.

Stores are in crisis.  If you really have content you advocate for, and a following that is being suppressed by the status quo–then get that content, and that following, into these stores. Drive sales.  Prop them up. Make your content the leg that saves the wobbling table–and they’ll have to keep it. This is your chance to crack the cultural monopoly, and claim a beachhead.

In the next installment of Comics Revolution, we’ll lay out a battle plan.