Crest of the Stars and Dungeon Born 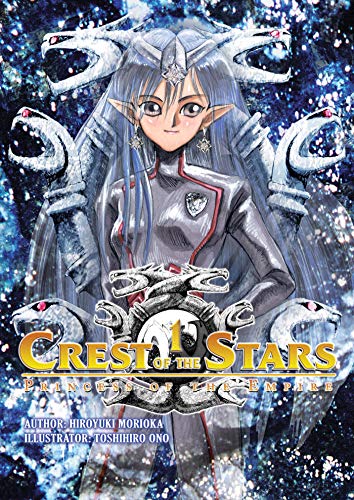 In the far-distant future, mankind has traversed the stars and settled distant worlds. But no matter how advanced the technology of the future becomes, it seems the spacefaring nations cannot entirely shed their human nature.

Jinto Lin finds this out the hard way when, as a child, his home world is conquered by the powerful Abh Empire: the self-proclaimed Kin of the Stars, and rulers of vast swaths of the known universe. As a newly-appointed member of the Abh’s imperial aristocracy, Jinto must learn to forge his own destiny in the wider universe while bearing burdens he never asked for, caught between his surface-dweller “Lander” heritage and the byzantine culture of the Abh, of which he is now nominally a member. A chance meeting with the brave-but-lonely Apprentice Starpilot Lafier aboard the Patrol Ship Goslauth will lead them both headfirst down a path of galaxy-spanning intrigue and warfare that will forever change the fate of all of humankind.

It’s refreshing to read a light novel not encrusted with 20 years of bad fannish in-jokes. However, Hiroyuki Morioka’s Crest of the Stars was also written at a time when linguistics was a writing craze on both sides of the Pacific Rim, so the book serves as much as a crash course on the Abh language as it does a story. The J-Novel Club translator uses an interesting strategy to minimize this, by bolding sections of the English text when corresponding Abh words have already been introduced to the reader. It’s still jarring, but not so much as the same text half-written in another language. A reader should not have to hold degrees in neologism linguistics, history, psychology or anthropology in order to understand the story. Fortunately, once the exposition-heavy introductions are complete, the interruptions settle to a more manageable rate. But that’s still one massive hurdle, one that many readers might balk at.

On the plus side, there’s a real Vorkosigan Saga feel so far as the story follows Lafier and Jinto on what will become their first mission in an interstellar war. There’s mild Ceteganda influence to the Abh, with a society disrupted by genetic manipulation and a uterine replicator on steroids. Lafier’s obsession with the proof and status of being a “Daughter of Love”, a child created from an act of passion instead of laboratory procedure, is a glimpse at the first cracks in the Abh’s air of supremacy. Neither Lafier or Jinto live up the manic level of Miles Vorkosigan, but then again, few characters do. Jinto displays a pragmatism forced on him as the only non-ethnically Abh noble, a mayfly among elves, while Lafier is a hammer with a strong sense of obligation that weighs heavily on her shoulders–more so than the privileges of her lofty position. Instead of an odd couple, they are complementary and rely on each other’s talents as they speed to warn the rest of the Abh fleet of invasion and war.

Crest of the Stars is the first third of a novel split into three books, instead of today’s spiraling serials, and in the 1990s, needed three years to find a publisher willing to take a chance on space opera at a time when space opera was a dying trend. The extra time was spent in refining the prose and the story, creating a space opera tale that is not just a good light novel, but one that can take its place among the better space operas world-wide. It helps that Morioka was a science fiction short story writer, not a fannish writer clinging to trends and in-jokes, and, with the exception of a Tom Swiftie or two, his prose, even when translated, is up to Western standards. This is aided by a rare but consistent use of dialogue tags, which more light novels should employ. Because of all this effort spent on the prose, characterization, and worldbuilding , Crest of the Stars can be recommended as a proper science fiction novel, not just a young adult paperback. 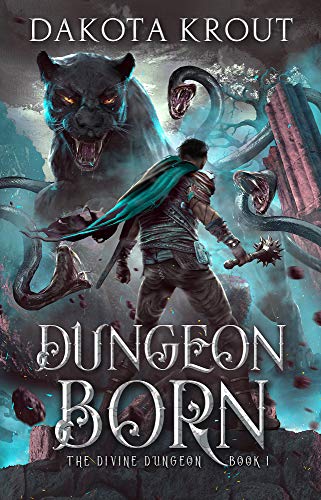 Conquering dungeons and using them to grow has long been the most efficient way to become a powerful adventurer. The only thing keeping the process from being easy is the Beasts that inhabit these places. Questions plague those entering this particular place of power: Where do the ‘rewards’ of weapons, armor, and heavy gold coins come from? Why is a fluffy bunny charging at me? For abyss-sake, why are there so many monsters?

Cal has all of the answers to these age-old questions for a very simple reason. He is a Dungeon Core, a soul forced against his will into a magical stone. With the help of an energetic friend, Cal grows a dungeon around himself to bring in new sources of power.

When a threat he doesn’t fully comprehend bares its many teeth, Cal is determined to survive the attempt on his life. Unfortunately for adventurers, the only way for him to achieve his goal is to eat anyone that enters his depths.

The first novel in Dakota Krout’s Divine Dungeon series, Dungeon Born starts as a pretty formulaic dungeon builder story, in the same vein and general plot as Bone Dungeon. A murdered man is reincarnated as a Dungeon Core, the chief intelligence in the creation and building of dungeons. Along with his fairy-esque assistant, the newborn Core branches out underground, absorbing wayward creatures and careless adventurers until he attracts the attention of the Adventurer’s Guild. The Guild debates destroying the young dungeon, but the drop of a legendary treasure persuades them instead to use it as a training ground for novice adventurers. Along the way, the Core stumbles into a special relationship with one of the young trainees, which will become a lifesaver to them both.

Here, the Core’s name is Cal.

Again, pretty standard stuff so far, although Dungeon Born has a sharper edge than the more whimsical Bone Dungeon. Yet Dungeon Born maintains the lighthearted approach that makes many dungeon builder stories a popcorn read.

What does set Dungeon Born apart from other lighthearted gimmick fantasies is its replacement of the traditional dungeon-builder game mechanics of HP, MP, and XP with the chi energy cultivation system of Chinese xianxia. This moves the actual dungeon building exposition from arbitrary mechanics to abstract, but more logically consistent methods. Issues of purity, contagion, and energy flow can affect what Cal is currently able to create, with breakthroughs coming from cleaning up energy paths and new ways to adjust the flows. Chi cultivation also allows for worldbuilding hooks into the plot that mere XP and MP do not allow. Surprisingly, this distinctly Chinese magic system is used without any other chinoiserie elements, which indicates a further progression of xianxia into the English-speaking fantasy mainstream.

However, Dungeon Born does have issues when it seeks to move past the narrow scope of the dungeon. Since the popularization of The Lord of the Rings, epic scale fantasy has been the flavor of the decades. An intelligent cave just is not mobile enough to visit, much less influence, cataclysmic events, and Dungeon Born, like its fellow dungeon builders, wants to play in the cataclysmic. And rather than train heroes, Dungeon Born wants Cal to be the hero. The result, played out in its sequels, is the power creep familiar to fans of shounen manga. There is also a lack of purpose to the story, as Cal grows stronger to draw more energy to grow stronger in a cave’s power fantasy. Every bit of cleverness is tied to a rather weak purpose with few obstacles in the way. The result lends itself to the open-ended approach of kishotenketsu‘s development-twist-consequences cycles instead of dramatic structure. Dungeon builders in general need more focused plots and more modest stories that take advantage of a dungeon’s immobility and allure to adventurers.

As mentioned, Dungeon Born is a lighthearted beach read with aspirations to something grander that stands out as a transitional story in the growing evolution of American xianxia.