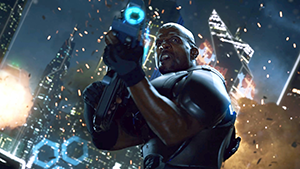 I had a terrible weekend. How about you?

For my part, I spent almost four hours watching E3 press conferences, first EA’s, then the Xbox’s, then Bethesda’s. And after seeing presentation after presentation, and trailer after trailer, my response is this:

Utter and complete stupefied boredom. Nothing excited me at all.

I’ll admit, I’ve become jaded and cynical the past three years. (More. More jaded and cynical I mean.) I assume every gameplay demo is lying to me, I assume EA is always lying about everything, and I assume Bioware will squeeze out another piece of… uh, garbage, “new IP” or not. (In my defense: I only assume that EA is lying about everything because they always have.) And when they announced a 4K texture pack upgrade for Minecraft… well, I felt some of my brain cells commit suicide rather than admit that just happened. And then Ubisoft said that “Ancient Egypt is the birthplace of modern civilization.” and my brain did this: 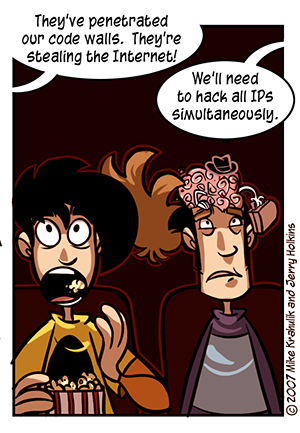 Which isn’t to say that it was ALL bad. There are some things I’m kinda looking forward to.

• I like the idea of a console that can actually DO 1080p at 60FPS. Sure, it took an extra five years to get here, and the insane media corporations are pushing 4K UHD TV’s, but NO WAY am I buying one of those white elephants. Actual 1080p x 60FPS will do just fine for me.

• I’m hoping Crackdown 3 won’t suck. I’m not BETTING on it not sucking, but I’m hoping for it. (Interesting choice having President Dwayne Elizondo Mountain Dew Herbert Camacho introduce this one.)

• A new Metro game is always a treat (assuming the studio doesn’t pull a Mass Effect 3). I enjoyed the first two, and the HD remasters actually improved both games in ways other than graphics, so I’m hopeful the studio HASN’T decided to trash its reputation with gamers yet.

• O.G. Xbox Backwards Compatibility is surprising, but in a pleasant way. So long as I can play Jade Empire, MechAssault 2, Star Wars Battlefront 2, and the KOTORs, everything else is gravy. (ESPECIALLY since I’d only buy the new “Star Wars Battlefront 2” after EA waterboarded me for a few hours, and not a minute sooner.)

• State of Decay 2. Just so long as it isn’t as buggy as the first one, and maybe a few less dysfunctional assholes, please.

And then there’s some things I was less than impressed with.

• Microsoft gives its consoles surprisingly neat names during development, and utterly bland crappy names when released. “Xbox One X”? Are you kidding me with this right now?

• Microsoft has an obvious case of Apple-envy (like penis envy, but with ever-thinner and -lighter “aluminium” cases). “Most powerful and smallest console ever”? Just do you, Microsoft. Make a kick-ass gaming console, so I can play my games in peace without having to worry about your inferiority complex. Also maybe fix the XB1 UI, because this one SUCKS.

• Battlefield 1: In the Name of the Tsar would be FAR more interesting with a single-player campaign attached. As-is, it’s totally useless to me.

Here’s the bit where I try to pull all this together, so as to make some coherent point before kicking off. There is one, though it may not be obvious from the above:

AAA console gaming is in trouble.

The graphical standards of the 1080p era were so high, they drove costs and development time into the stratosphere (and the dawning 4K era will only make this worse). As a result, the XB1 / PS4 era had a dearth of games, and consoles being consoles (and clueless corp rats being clueless corp rats), both companies screwed up royally on backwards compatibility (something the Playstation had once been good at). So the consoles launched with very few games, didn’t get many more, and those they did get were mostly “HD Remakes” of titles people already bought on the last generation of consoles. (This is WHY the three pressers were so boring, and depended on franchises and sequels.) This hit both companies hard, so their strategy for the last few years has been to mitigate it. (Hence 360 Back Compat, after so long.)

• Most of the games Microsoft showed during their presser deliberately eschewed Gears of War 4-level visuals, in favor of simpler, more stylized content. (It’s like someone spilled Team Fortress 2 graphics all over the game trailers.) It’s simply cheaper to develop a Minecraft than a Forza 7.

• Why the push for back compat? So players will have SOMETHING to play on the Xbox One X while waiting for new releases.

Last is the “Play Anywhere” strategy: buy an Xbox One game, and you get a Win 10 version for free. Yes, this helps prop up the (so far) unpopular Windows 10 platform, but there’s a little bit more to it. The Scorpio may be the most powerful console to have existed in all of history, but compared to even an average gaming PC, it’s woefully underpowered. “Play Anywhere” is the beginning of the end of consoles, the first steps towards conceding that the once-underpowered PC’s have long since surpassed dedicated systems. By merging Xbox with Windows, Microsoft is prepping their exit strategy from the console arena.

Even if the pressers hadn’t already ruined my weekend, that realization definitely would have.