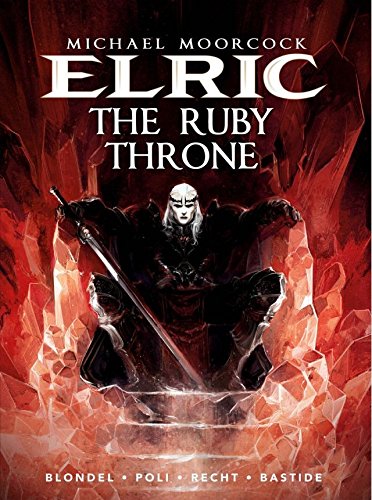 Michael Moorcock’s Elric of Melniboné has enjoyed a storied history in comics. First portrayed in a 1971 bande dessinee, Elric next appeared in America alongside Conan the Barbarian. Over the next forty-five years and more, he has continued to wander from issue to issue and publisher to publisher to the delight of comics readers. Most recently, Elric returned to bande dessinee in 2014’s celebrated Elric: The Ruby Throne, the first of a projected four volume series. Written by Julien Blondel, this adaptation, in the words of Moorcock, “is the saga of the Albino I would have written myself if I had thought of it first.”

The story is simple, but utterly disastrous for all in Melniboné. After millennia of dominance and centuries of decline, Elric, the prophesied last king of Melniboné, sits in a funk on the Ruby Throne, his strength sustained only by foul arcane magics. As his city languishes in a decadence where lifeblood flows freer than wine, his cousin Yyrkoon agitates to Make Melniboné Feared Again. The massing of viking-like barbarians on the seas bring Elric and Yyrkoon to an agreement of purpose, and the cousins rout the invaders. But Yyrkoon used the invasion as a pretext to drown Elric and seize the Ruby Throne. The sea refuses to claim the White Demon of Melniboné, and Elric returns to his home to take back the throne.

The ensuing fight feeds all the souls of Melniboné, slave and slaver alike, to demons. 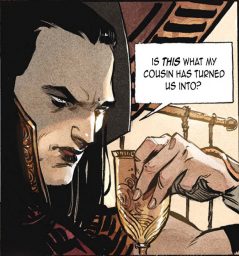 The Ruby Throne‘s artwork rates among the best I have had the privilege to review. Most of the previous bandes dessinees I have read indulge in vibrant reds and blues. Colorist Jean Bastitde instead makes grey and gold the standout colors of the palette. The illustrations are a collaboration between Robin Recht and Didier Poli, combining both styles in every panel. Stylized fantasy armor and realistic human figures blend together for disturbing portrayals of the callousness around Elric. Moorcock himself prefers this version of Elric as it best captures the casually cruel decadence of Melniboné. Coming from a creative culture that in the 90s wallowed in shock and in the 00s indulged in a penchant for torture porn, I am amazed at the restraint even as I am disgusted by the cruel indulgence in the suffering of others.

Melniboné is the sort of decadently cruel paradise that gets scourged time and again in recent fantasy, such as Red Seas Under Red Skies and even Star Wars: The Last Jedi. Mostly by writers promoting new moralities that lead inevitably toward Melniboné. Whether known as Melniboné, Omelas, or Canto Bight, this aristocratic paradise built on proletariat suffering reoccurs constantly. But the answer proposed to deal with its evil shifts over time, including the oppressed accepting a place as the new oppressors, getting away from it all, reform from within, and destruction from without. Within the context of these stories, this is framed as virtue struggling against vice. From the audience’s seat, more often these stories resemble little more than turf wars as yakuza replaces mafiosi replaces yakuza in a constant wave of rebellion that never stops to consider what to replace evil with, only who gets to push in whose eyeballs and lick clean the blood. (A scene illustrated inside The Ruby Throne.) Moorcock and Blondel avoid the hypocrisy inherent in most versions of this myth by framing it as a civil war among the forces of Chaos,  with no respite in the evils inflicted on the servile. There are no righteous here, not one.

I’ll be honest, reading this was like getting an eyeful of Hell, with evil deeds done by evil men for evil reasons. And I know I’m not supposed to like it and that disgust is the intended effect. Demons exist, often in human skin and the talent of Team Elric is to turn craftsmanship towards repulsion and horror without resorting to the grotesque. The result is to turn Melniboné into a more vivid depiction of Hell in comics than that found in the excellent Sandman: Season of Mists. The Ruby Throne is an unsettling read, made even worse by the revelation that Moorcock was struggling with the weighty issues of Britain’s decline and somehow in his search for answers made 2+2 equal 6. I can appreciate the exquisite craftsmanship of the story and the art, both steeped in canons long discarded by our contemporaries. I don’t have to enjoy it, though.

Like with Barracuda, your own enjoyment may well depend on your tolerance of grimdark. Make no mistake, earlier SFF stories are just as violent and dark. But The Ruby Throne replaces the weighty fear of the unknown with the more personal fear of man, and that is a more harrowing thing. I would freely recommend The Ruby Throne to fans of Elric’s print adventures. To those who are more squeamish, or are responsible for children and adolescents, I recommend flipping through an online preview or library copy before purchasing.