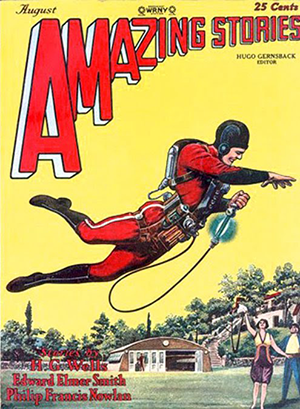 The Pulp Revolution doesn’t storm barricades—we straight fly over them.

To those offended, I say this:

Campbell, confreres, and successors have—for seventy-nine years—pumped out self-serving propaganda that paints the Pulps as worthless. Constant recitation of a litany of calumnies has succeeded in erasing not only the virtues of the Pulps, but even the memory of their existence.

You can likely recite the litany as well as I:

“Pulp is puerile, childish, and inartful. The stories are simplistic and obvious, the science sloppy and embarrassing, and the language purple, baroque, and overdone. They focus on action more than science, and that is Just Not Proper Science Fiction.”

Well, the Pulp Revolution is here and it’s time to set the record straight: Pulp stories are amazing.

Red for passion, Red for action and adventure and yes, Red for violence. Red for courage, Red for heroism, Red for heroics. Red for vividness and blood-stirring excitement. Red for outrageous creativity and inventiveness. Red for a vitality and drive that was, little by little, lost over the decades. Red for characters who fought and strove and lived, and writing that was about evoking emotions in the audience, not abstract intellectualisms or ideological lectures. Red for the blood of humanity.

In the days of the Pulps, magazines had to cultivate an audience and keep serving them, just to survive. Pulp stories had to thrill and enchant the audience. The further F&SF gotten away from this keystone, the worse it has become, and the smaller the audience has become: You can track the descent of the genre by the decreasing emphasis writers and editors placed on giving the audience what they wanted.

I’m not saying all Silver Age stories are worthless, far from it. Blue SF produced some great works, some of my favorite Science Fiction. And, as the Silver Age, it is provably superior (as a body of work) to what would be produced during the Bronze, Iron, and Clay Ages. But the Silver Age stripped out the core of Fantasy & Science Fiction: adventure, heroics, and heroism, wild creativity, variety, and vividness, and later Ages went even further.

All Fantasy & Science Fiction stories after the Pulps are just Pulp tales with good things taken away. (And, occasionally, bad things added.)

To the extent that writers omitted these virtuous elements, their writing suffered. Their stories simply could never be as thrilling, inventive, or beautiful as stories which included them.

They could never be as good as the Pulps, no matter what their propaganda said.

And, while I’m not rejecting all the work of the Silver Agers, I do repudiate and condemn their lies about the Pulps and the framework of literary criticism they imposed on Science Fiction. Splitting Fantasy from Science Fiction narrowed the scope of potential stories and straitjacketed writers’ imaginations. Venerating mere technical accuracy above all other potential virtues pushed writers to disregard those other virtues. And deliberately agitating against heroism and heroics… well, that’s just insane.

We can do better. And to recapture the audience F&SF once had, we must do better.

We can recapture the zest and zing of the Pulps, the heroics and heroism, the action and adventure, the inventiveness and creativity.

The Pulps were far more successful at satisfying audiences than tales of any later Age. If what is sought is a rejuvenation of the genre, they seem a perfect place to start.