Firepower of The Legend of Tarzan

Firepower of The Legend of Tarzan

In the interests of continuity (See: The Guns of Geronimo (ERBapa #142), A Message in a . . . bottle? (ERBapa APA #143), and Guns of The Land that Time Forgot (ERBapa #145 and Castaliahouse.com) regarding prior submissions (and, in all honesty, because I was positively tapped of ideas for something to write for the April 2021 ERBapa submission) I decided to continue my theme of movie firearms and memorabilia as they relate to the novels of Edgar Rice Burroughs.

It’s a fact that Ed frequently used firearms in his yarns. Being a collector of military arms of mostly the First and Second World Wars, I appreciate that Ed isn’t vague about what firearm a character is carrying, but quite the opposite, is often very precise about it. Many will recall the loving care that Korak takes of his “Enfield rifle” in Tarzan the Terrible, cleaning away its coat of mud and slime as best he might after crossing the morass; or that Erich von Harben of Tarzan and the Lost Empire doesn’t carry some nameless automatic, but burdens himself with a German Luger, “which he had insisted upon wearing in addition to the slim dagger with which Mallius Lepus had armed him.”

In reading through several volumes of the Tarzans lately, and having recently watched Tarzans Revenge (Glenn Morris and Eleonor Holm) I was reminded that The Legend of Tarzan (2016) offers some cool, period-authentic firearms that you do not see every day in a movie—or anywhere else for that matter. Let’s examine them.

The Guns of the Belgians

Our cinema feature opens circa 1890, which is anachronistic considering that Tarzan was born ~ 1888 in the novels. But when one reads Tarzan, anachronisms abound (I’m looking at you, Korak). But you know, it works just fine for the movie, so I’ll not say much more about it other than to add that that year is anachronistic in more ways than Tarzan’s age as we’ll see.

The Belgian forces bring to bear plenty of firepower in The Legend of Tarzan. Many of the characters bear an arm that was designed and fielded by France in the 1870s, the 11mm Chamelot-Delvigne Revolver. I mentioned this same revolver in The Guns of Geronimo (ERB-APA #142, and https://frontierpartisans.com/19586/the-guns-of-war-chief/) where I researched what I termed the “mystery revolver” of Burroughs’ novel, The Apache Devil. 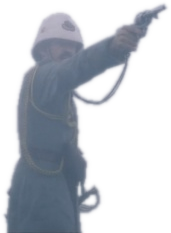 Although the soldiers in The Legend of Tarzan are Belgian, the excellent 11mm French revolver was used by multiple countries across several decades, until the end of WW2, actually.   Nearly 70 years is quite a lifespan for a service arm.

One of the countries that used the MAS M1873 was Belgium, soldiers of whom play the antagonists of our film, as led by Belgian envoy, Léon Rom, played by Christoph Waltz, who is just amazing in Inglourious Basterds. In the image of the Belgian soldier leveling his 1873, you will notice the added detail of a lanyard hanging from the pistol butt. This chap is preparing to throw down on a Leopard Man of Opar!

The Belgian soldiers are well-armed with their 1889 Swiss Schmidt-Rubin rifles. I almost bought one of these a few years ago and now I kind of wish I had.   The famous Swiss family of rifles, collectively called Schmidt-Rubins, are famous for their straight-pull bolt design—which is admittedly innovative. There is none of that shove the bolt up, pull it to the rear, push it forward to pick up a cartridge, tug it back down motion with the Schmidt.   You pull the bolt to the rear, then you shove it forward; it’s rapid—two motions versus four.

A Belgian soldier takes aim with his Swiss rifle

For a detailed run down on the Schmidt used in The Legend of Tarzan, and to see that two-motion bolt feature in action, check out a video on YouTube titled, Swiss Schmidt–Rubin 1889 with IV8888. The video review does a detailed dive into the rifle’s operation with plenty of close ups.

The 1890 setting is out sync in more ways than Tarzan being but two years old at the time; the choice of arming the Belgians with this rifle is another instance. A Turkish m1890 Mauser would have been a fine choice for the era in which the film is set. But the movie went with the M1890/38, a later model that was updated in the 1930s and readopted in 1938. The M1890 possessed a barrel sleeve which is lacking on the 1890/38 and wore a different stock. One clue is that circular ring set in the buttstock, called a “bolt take down” disk, a common feature found on many later Mausers. This disk is used to “field strip” the bolt to clean it but didn’t exist in 1890, coming about much later, in the 1930s.

It’s understandable why the prop department went with the M1890/38 for the movie, as few M1890s still exist in their original configuration, having mostly been converted into M1890/38s. I didn’t find a good quality photo of an unmolested M1890 to illustrate the differences but did find this photo of an M1888 Commission Rifle, which is similar to the 1890 and would have also been correct for the movie’s timeframe, featuring the barrel sleeve mentioned above, and a stock similar to what an M1890 would wear.

Above: an M1888 Commission Rifle, with similar features to an M1890, including the barrel sleeve (an insulating tube surrounding the barrel) and stock. Notice there is no upper handguard (IOW, the entire upper surface of the barrel sleeve is exposed) as on the M1890/38, no bolt takedown disk, and the sling attaches at the end of the stock, and the front of the magazine. This rifle would have been far more correct for Legend. 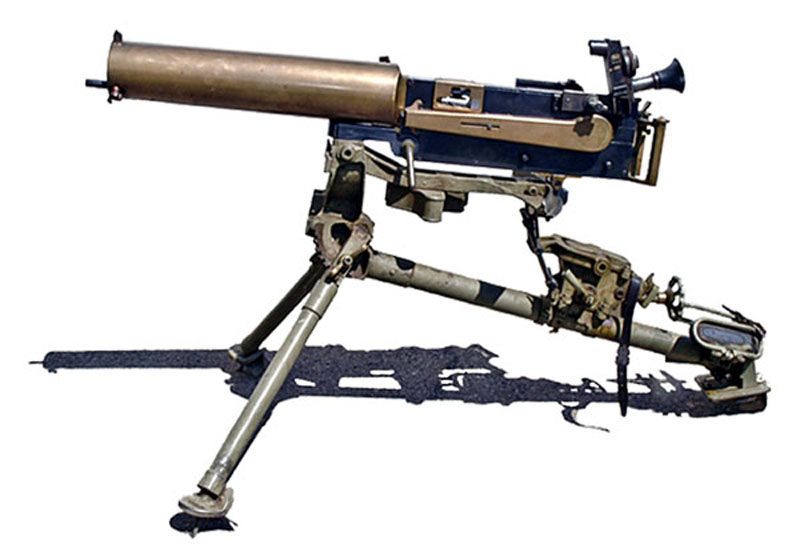 If what I read about Burroughs being a “Gatling gun instructor while serving as a soldier in the 7th US Cavalry Regiment” (http://pauljamesog.blogspot.com/2015/05/mr-gatlings-patented-revolving-battery.html ) is true, Ed might have approved of the inclusion in the movie of this tripod-mounted monstrosity.

<Note, the Gatling story must/might be true, because I also found it on Bill Hillman’s site, ERBzine: https://www.erbzine.com/mag2/0266p.html )>

Here we have another example of a firearm being used in the movie which didn’t exist in the timeframe in which the movie is set. According to IMFDB.org, the “Internet Movie Firearms Database,” a Model 1895 Maxim was used in The Legend of Tarzan (caveat, we’ll see later that we can’t go to the bank on everything you read on IMFDB), while George Washington Williams claims, “1886 model Maxim machine gun! This is way better than my Colt Walkers.”

It is mostly the Belgians who field this great beast in several scenes, but as we’ll see, they aren’t the only ones who manned one of them.

The Guns of the Good Guys

Now we’re talking. This is a favorite of mine. Putting one of these in George Washington William’s hands was a great call. It’s an excellent rifle even by today’s standards and was still in its infancy in 1890. This rifle is about as American as you can get, which is what one would expect of a hero who fought in the American Civil War. The rifle is also synonymous with the “Wild West,” appearing in nearly every western movie I have ever seen, so I am sure it felt quite at home in the wilds of Africa.

Two of the most famous “Sams” in American history *reluctantly* agreed to collaborate on this revolver which is wielded by Williams in Legend. The Colt Walker is the brainchild of Samuel H. Walker, a Texas Ranger, and Samuel Colt, of Colt’s Manufacturing fame. Jeff Richardson of AmericanCowboy.com sums it up perfectly: “After it came out, there was no question as to whether this new weapon would be effective—not only on the American frontier, but around the world.” (visit: https://www.americancowboy.com/people/big-guns-31038)

And around the world she goes, all the way to Africa where a pair of Walkers fill the fists of George Washington Williams, who laid hands on practically every firearm in the movie, as we’ll see. Although Williams only pulls these .44s in a single scene in Legend, he couldn’t have been better served than by a hand cannon that tamed adversaries both foreign and domestic.

Allow me to begin by saying that George Washington Williams, played by Samuel L. Jackson, is the man. He manages, in The Legend of Tarzan, to get his hands on almost every firearm the movie offers. His English double-barreled rifle is no exception—but it is exceptional.

These rifles are a gentleman’s rifle and the price of one will attest to that fact. Check out these examples: 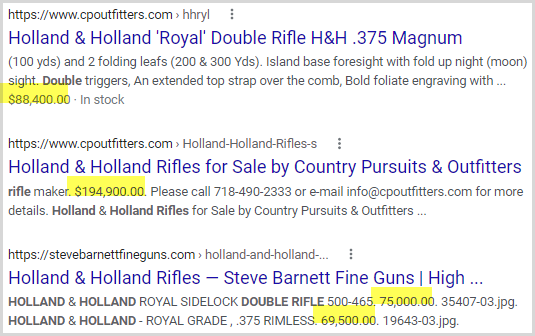 IMFDB is a great resource if you become interested in what specific firearms are used in a movie and was my primary source for this article. But they are not infallible (See https://www.moviemistakes.com/main11606).   The entry for The Legend of Tarzan (See: http://www.imfdb.org/wiki/Legend_of_Tarzan,_The ) refers to Williams’ double-barreled rifle as a “shotgun.”   It isn’t. His bandoleer of rifle cartridges (not to mention the rifle sights visible on the rifle) speaks eloquently that this is one of the coveted “Express rifles,” so-called for their extreme stopping power, that were popular with big game hunters “going to the continent.” This rifle would certainly have stopped Tantor and had no problems at all dealing with Belgian soldiers. 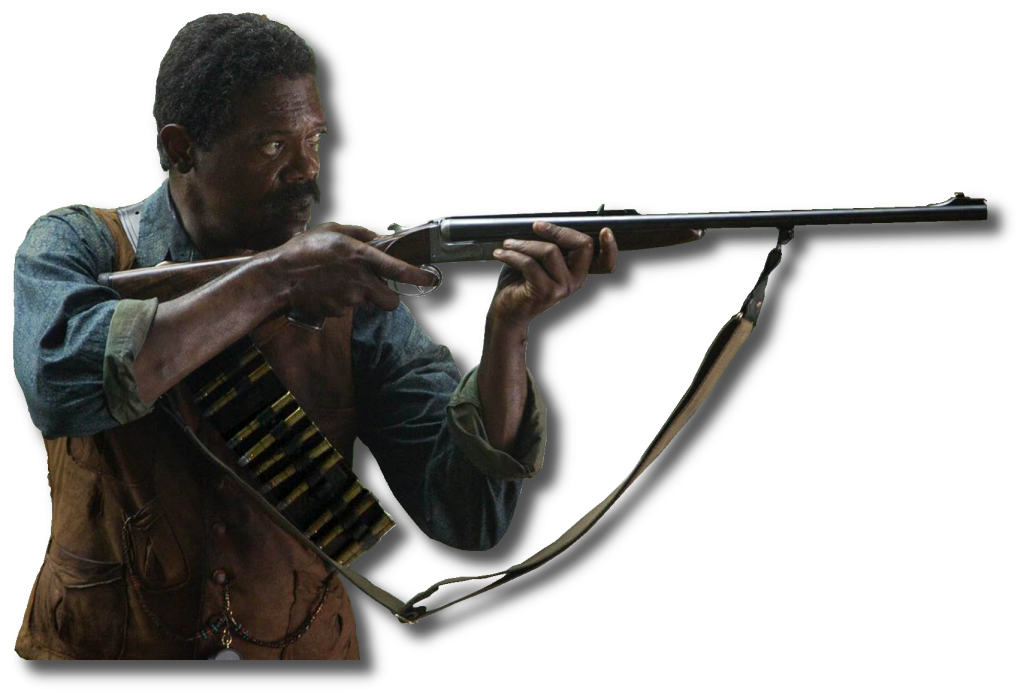 Williams with his H&H Double.   Note the rifle cartridges in his bandoleer.   These are not shotgun shells.   The rifle sights are also visible in this shot.

Williams didn’t limit his movie gun action to his Winchester, his Colt Walkers or his H&H Express. During The Legend of Tarzan, Williams manages to fire just about everything they had on-set.

As a soldier of the Union Army, Williams would possibly have been no stranger to machine guns, specifically, the Gatling. In this scene, he mans Hiram Maxim’s famous invention.

Remember the French 1873 Chamelot-Delvigne?   Below is a photo of Williams leveling one of these, too. I think Samuel Jackson just likes to wrap his hands around hardware.

I recall a similar pose with Samuel Jackson in Pulp Fiction . . . something to do with a Big Kahuna burger? 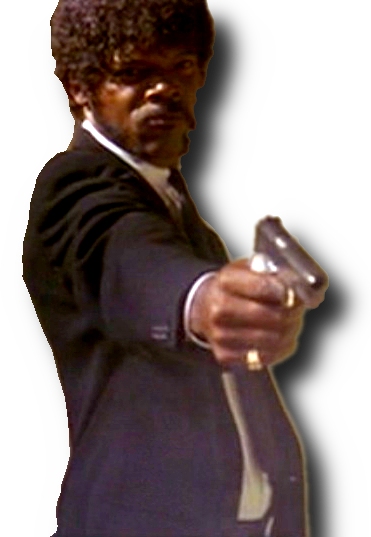 Forgive me, I tried, but in the end, I couldn’t resist the temptation to toss in this photo from Pulp Fiction. I loved the character of Jules. One has to wonder if he channeled his inner gangsta in some of Legend’s outtakes?

Speaking of the influences of other movies, examine this photo of Williams wielding his brace of Colt Walkers . . . and please, forgive the darkness of the photo; the scene takes place at night.

I think I’ll go with The Outlaw Josey Wales. 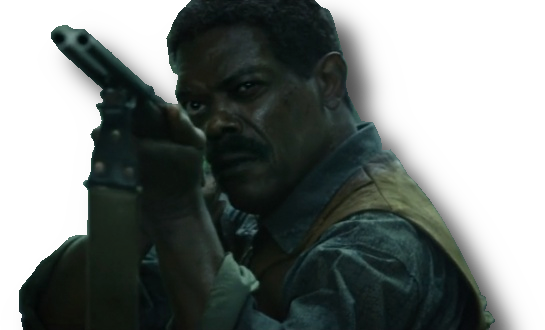 Here is a rather cool shot of Williams with his Double-barrel Express Rifle. Samuel could almost be aiming at King Kong, instead of Bolgani. 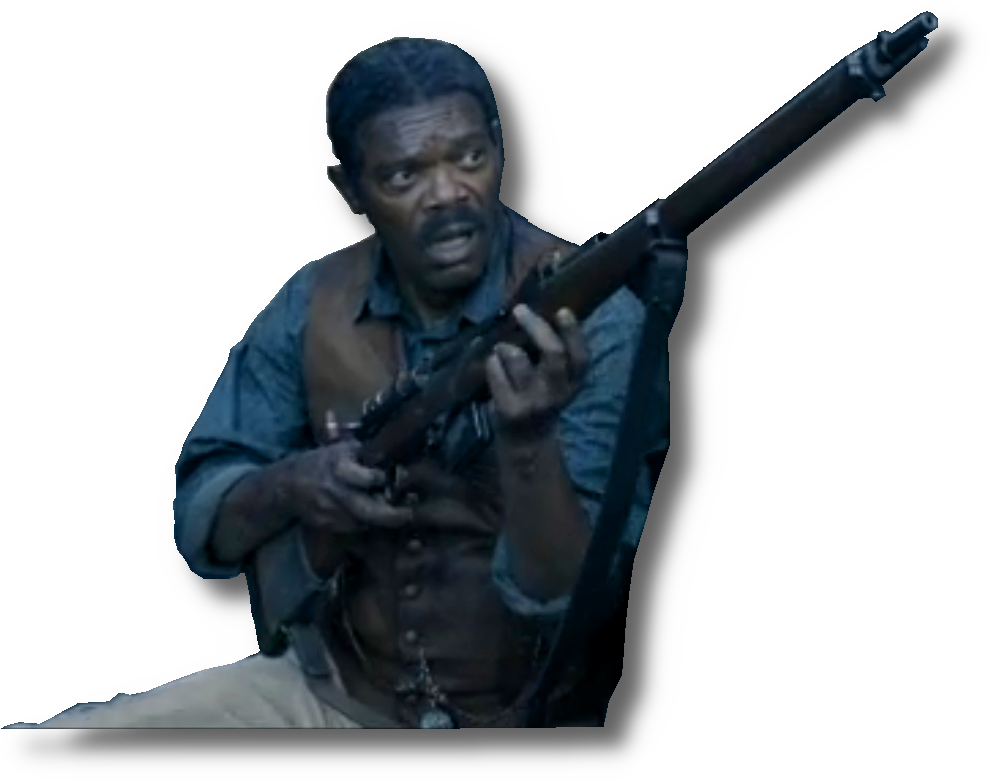 Recollect the Swiss Schmidt-Rubin rifle, the Swiss “straight pull”? Here is Williams with a captured M1889

The Legend of Tarzan (2016) was <to me> a good movie, with plenty of interesting, period firearms for the enthusiast. I feel that the prop department did their best to supply arms that were as close to what they were intended to be as possible. 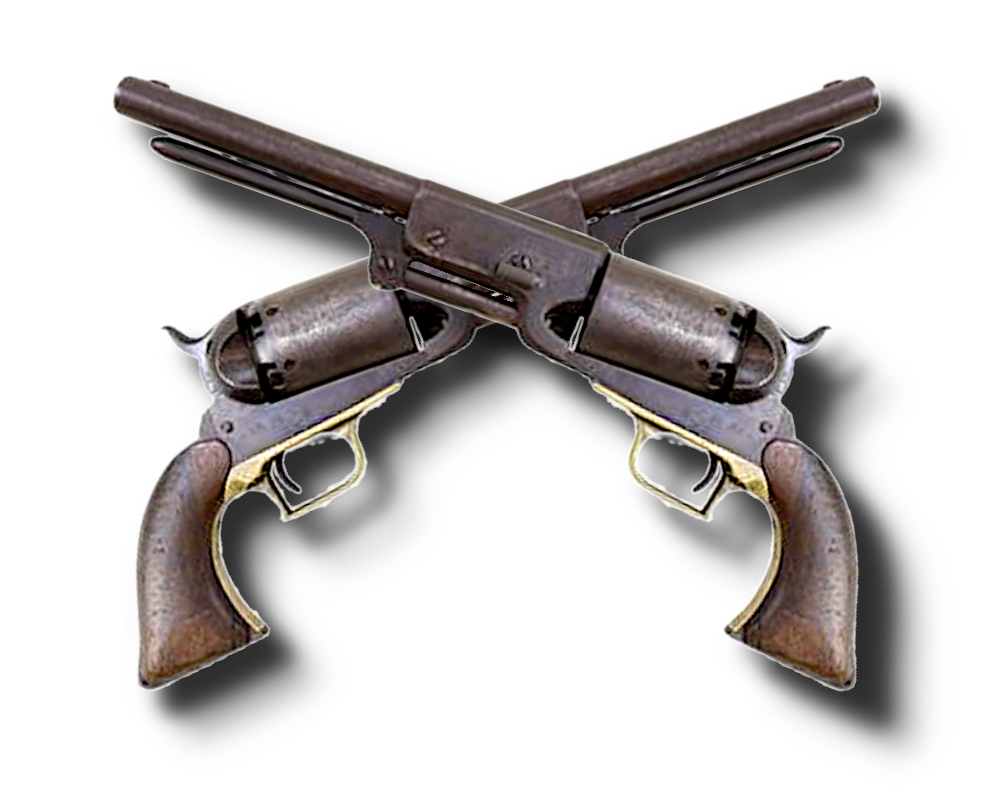