Genre Walls Will DESTROY YOUR STORY! 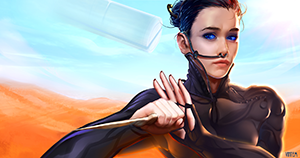 Dune. According to the pinheads, NOT Real Sci Fi.

Daddy Warpig is IN DA HOUSE! Time to cause another riot.

One of the strange side-effects of the last two years is that I’ve gotten to know a ton of editors and published writers, and get invited behind the scenes, as it were. And some of what I see is heartbreaking.

“Is this okay to include in a Steampunk novel?”
“Can I do this, and still have it be SF?”
“Is it okay to put this in an Epic Fantasy novel?”

Look, as writers you’re gonna meet a bunch of pinheads with stupidly precise laws governing what is or isn’t Fantasy or Science Fiction. “You may include vun—UNDT ONLY VUN—fictional technology OR IT IS NICHT DAS SCIENCE FICTION! VERSTEHEN SIE?!”

Screw those guys right in the ear. They are pedants and sperglords, and nothing they say is of any worth what-so-ever.

As a writer, write what you want. If it’s cool and interesting GO FOR IT. NEVER let sperglords and pinheads tell you what to include in your story.

You want to write the coolest, most compelling, most interesting stuff you can imagine. FEED YOUR IMAGINATION.

If you write Fantasy, stop reading modern Epic Fantasy immediately, if not sooner. It will only poison your mind and place walls around your imagination. Read some “Dying Earth”, some “Fafhrd and the Grey Mouser” (start with Book 2), some Lord Dunsany, some Sky Hernstrom, Poul Anderson’s Three Hearts and Three Lions, and SOME DAMN CONAN, by Crom! Break the chains of Modern Fantasy and learn how big your worlds can be.

If you’re writing Science Fiction, read the “Lensmen” books. Learn a sense of SCALE. Read “John Carter of Mars” or “Northwest Smith”. Learn a sense of wildness and adventure. Read some HP Lovecraft. Learn how weird and wonderful and terrifying SF can be. Learn how to make things fun and compelling.

Then go read the stuff from “the other side” of the supposed wall between Fantasy and Science Fiction, and realize Fantasy & Science Fiction is ONE genre, not two. NEVER be afraid to mix and match elements from whatever you please. (Larry Correia will help with this. Go read some “Hard Magic”. Heck, read Cirsova magazine and Jeffro’s Appendix N while you’re at it.)

GENRE WALLS DO NOT MAKE STORIES BETTER. You think Frank Herbert wrote Dune by sitting around and worrying what genre category it fit in?

“Golly, is a drug that lets you see the future AND super-gigantic FTL ships AND psychic drug addicts who pilot them AND a guild of martial arts superhero witch-nuns with access to ancestral memories running a 1000-year breeding program to make a God AND human computers AND melee shields that only let in slow blows AND books so small they have to be read under a microscope AND a box that induces pain AND gigantic damn worms that make the super-psychic drug and eat people who walk with rhythm AND alien planet pseudo-Muslims who ride the giant worms and wear keeny-neato desert water reclamation suits AND an incipient Galactic Jihad too much, or should I restrict it to VUN UNDT ONLY VUN fictional element so it can be REAL Sci-Fi?”

I AM HERE TO TELL YOU HE DID NOT.

At best, genre categories make books easier to sell. At worst? Well, at worst they become straitjackets for your imagination, where you write the same sort of stuff everyone else has been writing forever, because that’s the only thing you knew you could write about.

Limitations are for filthy scribblers who pen miserable works of woe and despair. You’re writing STUFF SO COOL IT WILL BLOW THE TOPS OFF PEOPLES’ HEADS.

Never be dull. Never be boring. Never be preachy. ALWAYS pick the most interesting elements you can include, whether it’s “realistic” or “genre appropriate” or not.

No walls. No limits. No masters.

Fantasy & Science Fiction is the genre of IMAGINATION. Give yours a workout. Let it off the chain. LET IT ROAR AND RUN WILD AND DEMOLISH ALL THE WALLS PEOPLE TRIED TO BUILD AROUND IT. Let your imagination go wherever it wants to and never rein it in.

That’s how you write fiction worth reading.