Ghost in the Shell Kinda Sucks, but Still Beats the Original 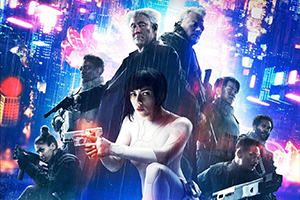 It’s Halloween, which means it’s the season for unpopular opinions: The Ghost in the Shell live action was better than the anime.

I saw GitS way back in 1996, shortly after it was released in the States (remember Blockbuster?), and again Saturday, for this post. My reaction, both times, was that it had some cool action scenes, but was overly talky in way too many places. Spectacular animation, terrible pacing. The plot was opaque, and the ending… murky to say the least. (Basically no real resolution to the central conflict, and no answer to the one question the audience most wanted answered: Did they merge?)

The 2017 live action version, starring Scarlett Johansson as Major Kusanagi, was faster paced and had different, and shorter, talky bits. The CGI and cinematography were gorgeous and the action nicely choreographed and shot. More, the plot was far more comprehensible and had a definite (and satisfying) climax. In most ways, it was simply a better movie.

The two movies are difficult to directly compare, however, as—aside from a couple of scenes—”2017″ completely ignores the 1995 original. The director literally took scenes from each of the several GiTS animated productions (including “1995”, its sequel, and the two seasons of the TV series), put them on cards, and shuffled them about to assemble a completely new narrative. As a result, “1995” and “2017” are separate, almost wholly unrelated movies.

(Ironically enough, after this was posted I found out that Ghost in the Shell (1995) was a mashup of a few unrelated storylines from the GitS manga, meaning “2017” was, in this way at least, following in the tradition established by the original.)

Fans of the original went to it expecting a remake, or close adaptation, and were bitterly disappointed (justifiably so). The problem is, so were mainstream viewers (the “remake’s” ostensible audience). As delivered, the movie had deep flaws, flaws which—despite its potential—prevented the movie from achieving broad appeal and mainstream success:

Movies like GitS need to decide which sex they’re appealing to, picking either a masculine focus on action, momentum, and direct conflict, or a feminine focus on interpersonal relationships, social status signifiers, and indirect conflict. A muddled mix of both of these, thinly overlaid on top of abstract, distant intellectualisms, appeals to neither sex. (This holds for most such fiction works: the author should identify the sex his work is primarily intended to appeal to, and craft it accordingly. A razor sharp focus on what the audience wants pays great dividends in audience satisfaction.) “2017” couldn’t decide who it wanted to satisfy, and ended up satisfying nobody. (The irony is, a completely faithful adaptation would ALSO have ended up satisfying nobody, except passionate fans of the original.)

Mass appeal requires crafting a movie that’s appealing. (Almost by definition, as it were.) The fewer people you appeal to, the less successful you’ll be.

The cast and crew of the 2017 movie were more interested in crafting a deep, “relevant” cyberpunk movie than in reaching or entertaining the audience. (Really. Watch the making of videos. It’s almost all they talk about.) “Exploring issues relevant to today” through abstract philosophical discussions is pretty much always going to be less successful than a thrill-a-minute cyberpunk action movie or a futuristic sci-fi romance focusing on a love triangle between the Major, the bad-ass and dependable (but boring) cop who loves her, and the irresistible bad boy criminal ex-boyfriend from out of her mysterious past. PICK A LANE, GUYS.

2017 Ghost in the Shell appealed to neither fans of the original nor mainstream audiences, dooming it to flash-in-the-pan status. It had great promise as an action-oriented cyberpunk film (in the vein of the popular GitS TV series), promise the movie unfortunately squandered.