God’s Blessing on This Wonderful World #1 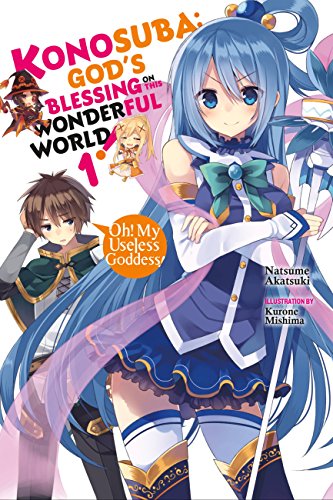 When perennial loser and MMO junkie Kazuma Satou dies trying to save a girl from a runaway tractor, he finds himself in the waiting room of heaven, where, after a goddess roasts him for being an idiot, she gives him a choice. Kazuma can enter heaven, or take a continue in an MMO-inspired world as an adventurer. Kazuma naturally chooses the second option, complete with the customary choice of a starting cheat in the form of a legendary item or skill. Wanting to wipe the smug smirk from the goddess’s face, Kazuma selects her as his special perk. After all, what could be more powerful in a game than a goddess? To her horror, heaven agrees to his request and sends them both to the fantasy world. Now Kazuma and the goddess Aqua must quest to defeat the Demon King before either can return home.

Written by Natsume Akatsuki, the first volume of God’s Blessing on This Wonderful World (hereafter KonoSuba) takes delight in upending expectations in a loving but humorous take on the isekai alternate world and litRPG genres. A loser in life, Kazuma should be an unbeatable hero in the new world, according to the conventions of litRPG isekai stories. Instead, he is stuck with poor stats, an even weaker class, no money, bad luck, and Aqua (the last three are somewhat synonymous). While he is clever, he is forced to kludge desperate plans of last resort based around the foibles of his party, instead of relying on the cheat powers granted supernaturally to other protagonists. But bad luck (and Aqua) keep him at the lowest rungs of the adventurer’s guild. His first meeting with Aqua begs for a Magical Girlfriend subplot, complete with First Girl Wins tropes, as usually happens when a lovable loser tells a goddess he wants her by his side. But neither can stand each other, and their forced cooperation proves burdensome for both sides. Look for latent sexual tension elsewhere. But more importantly, KonoSuba allows its characters, particularity the females, to have faults.

In the 2000s, the conventions of harems, moe endearing cuteness, and erotic visual novels swept through anime, manga and light novels with disastrous effect on characterization. Fully realized characters with talents, foibles, and faults were replaced by inoffensive and nonthreatening collections of quirks and impossibly glamorous and complex hair. Maybe a tragic backstory might be added, if the audience is supposed to cry. Here, the girls keep their flaws. Aqua is a vain, selfish, spiteful showoff, whose divine interventions only make situations worse for Kazuma and his party. Arch-wizard Megumin is stuck in eighth-grade delusions of grandeur. Sure, this junior higher with an unwarranted sense of superiority puts the Explosion in nuclear explosion, but she can only cast it once a day–and refuses to cast anything else. And while their crusader Darkness is a sturdy and unyielding tank, not only can this centerfold not hit anything with her sword, she’s a Fifty Shades of Grey/John Ringo type of girl, much to the discomfort of everyone around her. For once in an isekai, a protagonist actively avoids romantic entanglements with his party. Perhaps the only character who doesn’t show her faults at first is Wiz, the pretty, kind, motherly, and well-mannered Lich, who serves as a foil for Aqua’s divine folly. But Wiz will soon have problems of her own.

The illustrations that accompany the light novel are subdued when compared to the later anime release. Certainly comics quality, but lacking the contrasts, distinct lines, and fanservice of the animation. And the translation is eminently readable, unlike many mid-tier light novels brought over to English audiences. Having physically recoiled from wonky word order and choppy prose from other professional translations (and a score of fan translations), I am pleased to see that Yen Press continues to set the standard for light novel readability. They certainly preserved the pacing and humor of the original Japanese.

KonoSuba is so wrapped up in spoofing the stories found in Overlord; Slayers; Love, Chuunibyou and Other Delusions; and Oh My Goddess! that newcomers to the light novel genres parodies within might miss out on the gags. Of course, the audience drawn to light novels is somewhat self-selecting and usually familiar with the tropes within, but other obstacles exist. Despite his flashes of brilliance, Kazuma never escapes the role that the comedy confines him to, that of being a loser. This limits his appeal to many younger readers. After all, what kid wants to look up to a shut-in MMO raider? And the admittedly light litRPG touch still feels like an intrusion, with talk of levels, skills, quests, and guilds disrupting the comedy. Mechanically, there’s not much crunch here, unlike the detailed stat-sheets of American litRPG, but there’s also not much originality to the player parties, as the traditional fighter-rogue-priest-mage setup features prominently. But then, the appeal of KonoSuba is in its characters and humor, not the munchkin-ing of its rule set.

Like many light novels, KonoSuba is for fans by a fan, but at least it attempts something more novel than the traditional power fantasy of male-oriented isekai. Unfortunately, as the series progresses, the originality is slowly smothered by the conventions of isekai litRPG. Veterans know the deal, hot springs scenes, maid and butler play, and the whole pervert’s symphony of misunderstood and compromising situations. These familiar set pieces and stock characters replace the humor more and more as the series wears on. Even as he grows in competence, Kazuma never shakes the assigned role of loser, and the underlying message hammered home by Aqua’s taunting and the fantasy world’s secret history is that if you’re a loser in one world, you’re a loser in all. A subversion of isekai power creep to be sure, but Kazuma consistently gets dragged back from the blessings of becoming an ordinary average guy by the anchor that is Aqua.

If you are a fan of the anime or of similar stories, check out the entire series. But if you are just interested in checking out what the average light novel or foreign pulp reads like, stick to the first volume and pretend KonoSuba is a one-shot.