How Not To Write Pulp: Brood of the Witch Queen 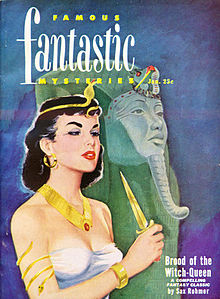 As noted in a recent article, Sax Rohmer managed to write one of the greatest pulp novels ever, The Insidious Dr.Fu-Manchu, as well as one of its worst, Brood of the Witch-Queen.  While I examined the former in-depth, I didn’t do so for the latter.

Well, I believe any negative opinion of a book deserves a full explanation, especially one penned by a significant writer like Rohmer.  Furthermore, it will be instructive to see the possible pitfalls of pulp, and how they can be avoided.

It doesn’t start off too badly; the book’s very name promises adventure and horror! Robert Cairn and his celebrated father, medical genius Dr. Cairn, must fight against unholy abomination Antony Ferrera, a vile and powerful sorcerer resurrected from the dead. He was inexplicably adopted by Dr. Cairn’s close friend and colleague, Michael Ferrera. There is even a damsel in distress, Myra Duquesne, adopted daughter of Michael, who Robert is hopelessly in love with, and Antony has dark designs upon.

On the surface, it retains several qualities I enjoyed in the Fu-Manchu series. From the very first page, the reader is instantly plunged into the adventure. He is confronted with horrors, murders, and supernatural abominations. Rohmer knew what his audience wanted, and there is plenty of action throughout.

Like the series on the diabolical doctor, it follows an episodic formula, where every few chapters are a new occult outrage by Ferrera, all loosely tied together by an overarching plot.

Unfortunately, when it comes to the specific details that made the Dr.Fu-Manchu books so much fun, Brood of the Witch-Queen is a failure.

A critical problem is that the antagonist, Antony Ferrera, relies on supernatural powers. Fu-Manchu, no matter how far-fetched, was limited to mortal implements. Thus, it was unclear how Fu-Manchu accomplished his crimes, and Rohmer’s explanations were frequently clever.

That is lacking in The Brood of the Witch-Queen, since the answer each time is “magic!”. This reduced my interest considerably, since it effectively eliminates any mystery, and makes Rohmer’s story, already predictable with its few characters and singular antagonist, more straightforward and bare bones. At times it’s dull despite the action.

The magic itself possesses neither consistency nor well-defined limits. In an early chapter, Antony Ferrera attempts to murder Robert Cairn in his apartment simply through his ghastly powers. Near the end of the work, despite supposedly growing continuously stronger, Antony now requires Robert to pick up an object he has left behind. Only through this is he able to “focus” his powers and make another attempt on Robert’s life.

Despite his supernatural powers, Ferrera is nowhere near as interesting or menacing as Dr. Fu-Manchu. When Rohmer informs us that Dr.Fu-Manchu is perhaps the most dangerous man in the world, we believe it.

After all, Dr.Fu-Manchu possess a small army of minions, huge sums of money, and many other seemingly limitless resources. Additionally, he is the head of a powerful Chinese secret society, and assassinates and tortures key British diplomats. He can kill remarkably easily, through a variety of means. His influence seem believable; after all, every nation has shadowy power brokers, and at a time when few Europeans knew much about China, who was to say that a figure like the evil doctor didn’t exist?

Compare that to Antony Ferrera. He is a lone antagonist. He has no minions. His only resource is money, and not to a particularly great extent. Throughout the book, he murders only four people, none of them wielding any influence. And to commit his killings, he requires time, equipment, and special circumstances! When Robert meets Antony later on in the book, the evil sorcerer is forced to flee, for he is no match against an average human being armed with a pistol in direct confrontation. Moreover, Ferrera is never remotely credible as a villain who could exist.

Thus, when Rohmer proclaims him to be the most dangerous man in all of Europe, I simply laughed.

The protagonists are similarly poor. Robert Cairn seems wholly ineffectual and incompetent, consistently requiring his father to rescue him. Compare that to Dr. Petrie, who saved Denis Nayland Smith almost as many times as Smith did him.

And Dr. Cairn is a gruff, amorphous hero with zero personality, a far cry from Smith.

The episodic nature is also strained, as events in one adventure are either contradicted or quietly ignored in a later one. I already mentioned one example above with Ferrera’s power, but a particularly confusing event occurs with Myra. After Antony kills his adoptive father Michael through dark magic, Myra enters the room in a trance and proclaims him to be the killer, for which she will never forgive him.

This event is never mentioned again in the story by anyone, and for many chapters afterwards, Myra continues to meet with Antony and loves him like a brother.

Similarly, Dr. Cairn, who witnessed this murder, and pointed out Antony as its perpetrator, is initially reluctant to consider Ferrera evil, or go after him aggressively.

This, despite Dr. Cairn mentioning later on in the book that he knew about Antony’s evil origins, and that he “has passed from crime to crime” since childhood. Yet, despite this, neither Michael Ferrera nor Dr. Cairn had thought to stop him earlier? And Dr. Cairn still isn’t sure until Antony kills a few more people? It’s shabby writing for the sake of plot convenience.

Of course, there are other plot holes. For instance, when Robert Cairn learns from his father that a silk cord of his is the means by which Antony is projecting his evil energy into his apartment, why doesn’t he simply burn the bloody thing? Instead, he does nothing, calmly stays in the haunted apartment, and almost gets killed for his troubles! (Until being saved in the nick of time by his father, as usual)

The most galling event is near the end, when, after 200-odd pages of juicy exclamations like

“scene of one gruesome outrage in Ferrara’s unholy campaign”

“the drama of evil”

“A menace, dreadful and unnatural,”

Robert Cairn finally manages to discover a likely trail to Antony Ferrera. In light of this unbelievable opportunity to finally put this terror to rest, what is his father’s response?

“I will leave the inquiry in your hands, Rob. Unfortunately other duties call me.”

Yep, it’s not important enough! Of course, the reason for this is so that once Rob tracks Antony to his hideout, he then has to report to his father, and they must survive another attack by Antony’s magic that night. 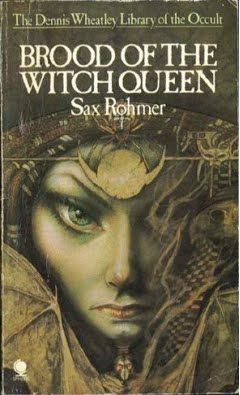 At least the book spawned many creative covers!

While it bears Sax Rohmer’s trademark lightning pace, non-stop action, and lurid events and imagery, The Brood of the Witch-Queen is nevertheless predictable, frequently monotonous, and wildly jumbled together, with errors galore.  Having researched his biography for my last article, I wonder whether monetary matters were a factor.  Rohmer had made several bad business investments around the time the book was published, 1920.

What can we learn from this book?  A number of lessons.  The importance of craftsmanship and attention to detail in a pulp story, no matter how exciting the core concept, or amount of action. That it’s essential for an episodic work to be coherent and add to an overarching storyline.  That the antagonist has to be menacing, memorable, and at least vaguely believable within the story’s world.  While the protagonists should have personality and avoid foolish blunders.

All elements that the best pulp works, like The Insidious Dr.Fu-Manchu, accomplish in spades.