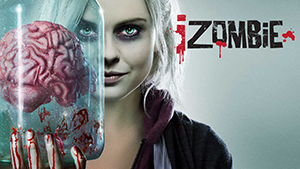 Look, it’s really hard to get passionate about just okay stuff. With great stuff, you can tell people “WATCH THIS NOW OR YOU’LL MISS OUT ON THE GREATEST THING EVER!”, and with bad stuff you can tell people “DON’T EVER READ THIS EVER OR YOUR CHILDREN’S CHILDREN WILL BE WEEPING TEARS OF BLOOD THEIR ENTIRE LIVES!”, but with just okay stuff you’re just like “Yeah, I played it. It was fine.” Which brings us to iZombie.

Yeah, I watched it. It was fine. Until this season, at least. Then it took a nosedive from “marginally watchable” to “marginally unwatchable”.

What do you say when something kinda meh goes bad? “YOU RUINED MY CHILDHOOD!” is waaaaaaaay too hyperbolic (even for me): you can’t work up a really good sense of betrayal at losing something that hasn’t been around that long, and wasn’t all that good to begin with. When the truly mediocre takes a nosedive, all you can say is “OK, guess I’ll watch something else then.” (Which just takes all the fun out of hyperbolically ranting about it.)

So what killed the zombie show? Something something clever metaphor Mozambique Drill: “Two to the chest, face gets the rest.”

Shot One: Disappearing up its own anus. iZombie began as a pretty formulaic Police Procedural (what my generation used to call “cop shows” or “mysteries”) with an interesting hook: the main character was a zombie. Not a classic voodoo zombie, nor yet a Romero shambling zombie, nor even a modern fast zombie, but that hyper-modern strain I call lucid zombies. Lucid zombies keep their mind and personality, and usually gain some funky superpowers, but ceaselessly crave human flesh. (They’re like IRS employees that way.)

When the iZombie herself eats the brains of crime victims, she gets flashbacks to their life before they died, which are clues to help her and her partner solve the crimes. Plus, her personality changes to match that of the victims, meaning one week she was a gambling addict, the next a Mr. Rogers style (but also philandering) schoolteacher, and the next an adrenaline junkie extreme sports enthusiast. Neat little hook, made for a neat little show, and so long as the show stuck to the Police Procedural formula of “one case per episode, case being usually solved this episode”, the show worked.

Now, none of this is to say the show is entirely bad. It still manages to impress: the Dungeons & Dragons show was pretty good, but even that episode (a high point of the season) cheated you out of solving the mystery. The case was just kinda shuffled off screen, “Russian hackers”, and was never mentioned again. Disappointing.

Yes, the main character is an iZombie who you’re supposed to empathize with, but that was fine. So long as she was (almost) the only one. But when I’m expected to empathize with countless numbers of flesh-eating freaks, and all of the characters who don’t are made purposefully repellent, it begins to grate. ESPECIALLY when the zombie conspiracy theorists turn out to be right, not just morally but factually: zombies were real, they had infested city power structures, and the zombies were planning something big and evil. Spending the entire season making the anti-zombie forces look like total losers was a massive error. Even if you wanted them to be villains, have them be scary and competent villains, not losers.

Shot Three: Insulting your audience. It wasn’t just that the zombie-hunters were made repellent, it’s HOW they were made repellent that added insult to injury. According to the show, the poor, helpless victim zombies infesting Seattle were being picked on (and occasionally picked off) by stupid unwashed racist gun-nut Southerner right-wing government-distrusting conspiracy theorists (with a secret base in the basement of a local gun range) who only wanted to kill the poor, innocent, highly infectious brain-eating monsters slowly spreading through the population of Seattle eating the brains of the recently-dead and still-living alike.

It is a manifestly stupid idea—to which Hollywood is nonetheless wholly addicted—to insult, demean, and sneer at your audience. Right Wing people watch TV too. Shocking, but true.

You know who ISN’T watching TV? iZombie fans. Since its debut season, the number of viewers has dropped by half. Almost a million people just walked away from the show.

The CW—iZombie’s parent network—has renewed the show for a fourth season, but if the numbers don’t pick up, it’ll probably be the show’s last. Which is sad, because it had some promise. It could have been pretty good.

As it is, the zombie show is dying of self-inflicted wounds, and right now I can’t even feel bad about that. It was fine, and then it wasn’t, and (as with The Walking Dead and Z Nation) now it’s time to move on.