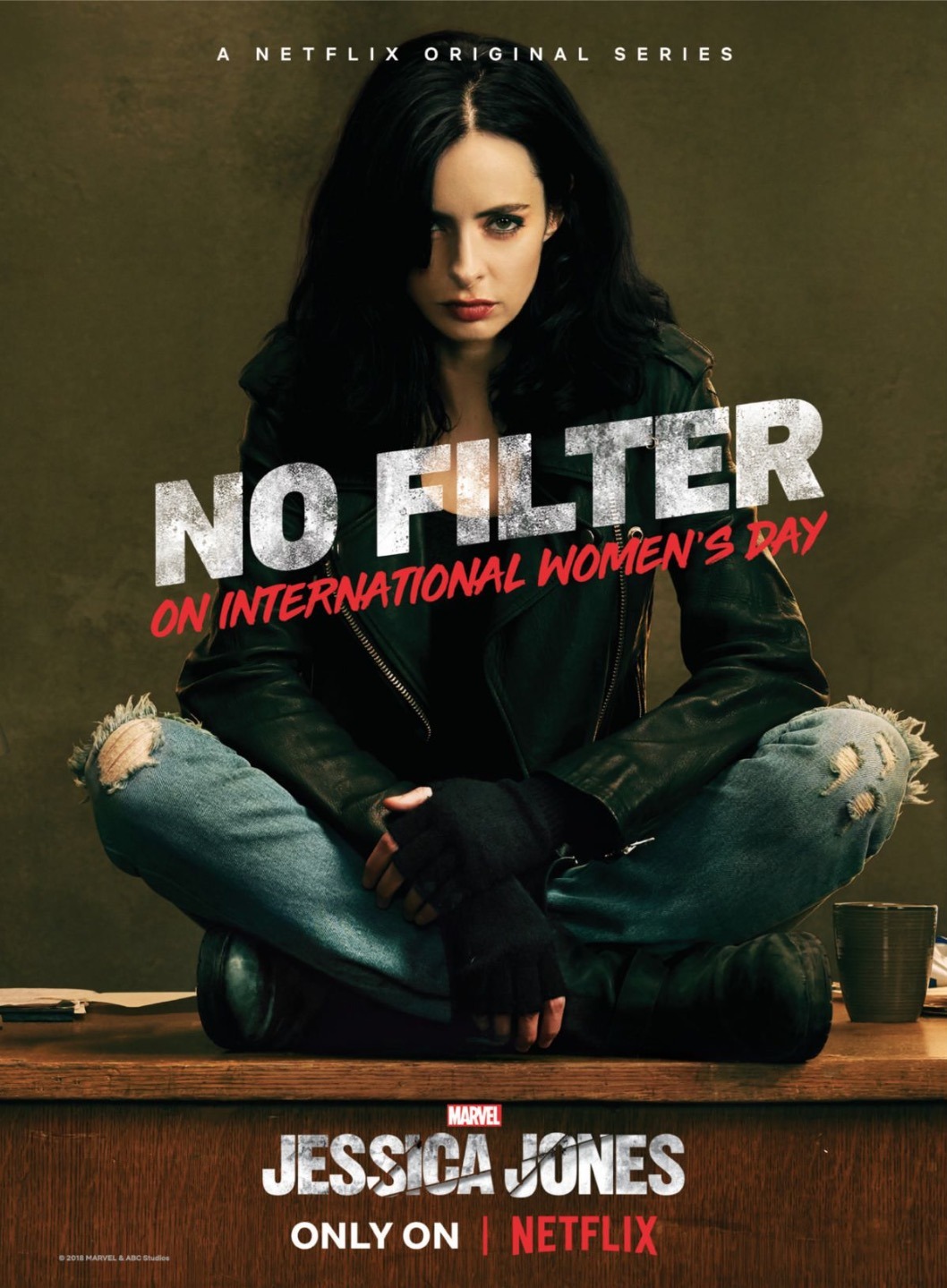 I take it all back. OBVIOUSLY Jessica is cheerful and friendly, with a smile that could light up Times Square.

Jessica Jones, an ostensible superhero, is a compulsive narcissist, a miserable bitch who spreads misery wherever she goes. The first season of this Netflix Marvel show tried to justify her miserable narcissism by blaming it on her dead family and her insanely-tragic-in-an-over-the-top-adolescent-way past history with a mind control psycho.

The funniest thing about Season Two is that we find out that Jessica has ALWAYS been miserable, and always made everyone around her miserable. Her family dying in a wreck and her subsequent angsty backstory didn’t MAKE her miserable, it just allowed her to be as miserable as she already wanted to be.

This is NOT a hero. This is what an incompetent writer thinks a hero-with-a-tragic-backstory is.

Spider-Man has a proper tragic backstory, and he didn’t become a drunk and sit around all day making everyone around him suicidal and depressed. HELL TO THE NO! Because he’s a hero. He helps other people and does good.

Jessica is a narcissistic drunk, a narcissistic drunk with SUPERPOWERS, a narcissistic drunk who spends all her days crying about how hard it is being a smart, hot, ace detective with superpowers and insanely rich family and clients, plus her hot super, al of whom—for some inexplicable reason—put up with her whiny neurotic narcissism. Basically she’s one electric blue dye job and a mental illness haircut away from being a Socialist YouTube activist.

“I have superpowers, pouty lips, and legs for days! WOE IS ME!”

(Shut the hell up. People with real problems are talking.)

Miserable narcissism is, of course, SJW for “STRONG WOMYN WHAT DON’T NEED NO MAN!” Actually, none of the women do, the show suggests. The one good relationship in the show—Jessica’s adoptive sister is dating a world famous wealthy combat reporter who even Jessica can’t find any dirt on—is terminated when the sister picks career over having a family. (Boy, will she regret THAT decision in roughly 5-10 years.)

Added to this is the usual array of Leftist idiocies: illegal alien is pure and innocent, the white citizen is a scumbag; an ex-con man who orders Chick-fil-A; and—I SWEAR this is true—gay bashing jocks who are probably repressing latent homosexual tendencies. Because we had to hit ALL the cliches. (Also, they released this season on International Women’s Day. I SWEAR this is true.)

Now, all this makes it seem like I hated the show. Which is wrong—I didn’t HATE it. The politics aren’t on-the-offensive, like they were in 2016’s Ghostbusters de-make, they were stock, rote, and by-the-numbers. The attitude is less “PUNCH A NAZI!” and more “Do I HAVE to eat my broccoli? Alright…”, as if the writers themselves were as bored with their political schtick as I was. And, setting politics aside, the season isn’t TOTALLY bad:

The acting is pretty good, as is the casting. New York looks appropriately… ah… New York-y. And, as a piece of fiction, the season is much better constructed than most Marvel Netflix shows. It still has lots of padding, but the story flows better, and is moderately better written. Jessica Jones would almost be a good show…

If Jessica herself weren’t such a miserable bitch.