Whether it’s hiding in the Twilight night clubs of New York City, surviving the post-apocalyptic hills of Virginia, fighting in the rearguard to protect the Long March through the Kigeli Nebula, or swooping through the skies on the steam-powered airships of Rislandia, let’s take a look at some of the hottest science fiction and fantasy adventures released in June. 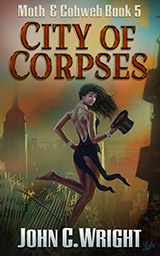 Yumiko Moth has discovered her name, but she still does not know who, or what, she is. What she has learned is that her mother is dead, her master has disowned her, and her beloved has vanished. And she also knows that the Day world is a very dangerous place for a Twilight girl, especially when the dark forces of Night are hunting her.

To discover the truth she seeks, she must infiltrate the enemy’s citadel. In New York City, that is The Cobbler’s Club, home to the world-famous Peach Cobbler Girls. But how can a girl who stalks the shadows hide herself in the bright lights of the stage?  CITY OF CORPSES is the fifth book of MOTH & COBWEB, an astonishing new series about magical worlds of Day, Night, and Twilight by John C. Wright.

John C. Wright is one of the living grandmasters of science fiction and the author of THE GOLDEN AGE, AWAKE IN THE NIGHT LAND, and IRON CHAMBER OF MEMORY, to name just three of his exceptional books. He has been nominated for both the Nebula and Hugo Awards, and his novel SOMEWHITHER won the 2016 Dragon Award for Best Science Fiction Novel at Dragoncon.

Echoes of Glory (Blood on the Star #4) – Jay Allan 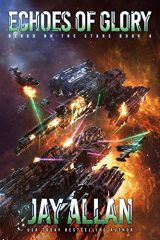 A Fight to the End…

The Confederation and the Union have fought each other to a standstill. Battered, exhausted fleets eye each other warily across a border that has been a battlefield for three bloody years. Neither side has the strength to attack, and both wait for reinforcements that will allow them to resume the fight.

On the worlds of the Iron Belt, the heavily industrialized sector near the Confederation’s Core, massive shipyards operate around the clock, producing the great vessels that can end the war. The Union knows it cannot win the economic struggle with its wealthier, more productive enemy, and Sector Nine, its feared spy agency, is not idle. Their focus is not on the front lines, the ravaged border between the two nations, but far off, beyond the Rim, in the strange, militaristic realm know as the Alliance.

Sector Nine’s intrigues are targeted at nothing less than instigating a coup, and bringing to power a regime that favors war against the Confederation, a change in government that will bring the fresh fleets of the Alliance into the war, striking at the Confederation’s unguarded flank.

Once again, Captain Tyler Barron and his battleship Dauntless must go back to the Rim, and on to the Alliance itself to somehow thwart the Union’s plan…and prevent a two-front war the Confederation cannot win. 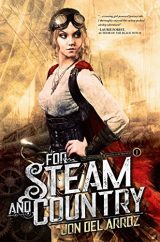 Her father’s been pronounced dead. Destructive earthquakes ravage the countryside. An invading army looms over the horizon. And Zaira’s day is just getting started…

Abandoned at an early age, Zaira von Monocle found life as the daughter of a great adventurer to be filled with hard work and difficulty. She quickly learned to rely on only herself. But when a messenger brought news that her father was dead and that she was the heir to his airship, her world turned upside down.

Zaira soon finds herself trapped in the midst of a war between her home country of Rislandia and the cruel Wyranth Empire, whose soldiers are acting peculiarly—almost inhuman. With the enemy army advancing, her newfound ship’s crew may be the only ones who can save the kingdom. 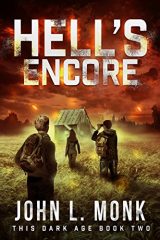 After the long cold winter…

Jack extends his domain from the hills of Virginia to the waters of the Chesapeake in search of a more stable food supply. Unbeknownst to him, mechanized death under the control of a sadistic boy threatens what fragile progress he and the survivors at Big Timber have made. To protect the people he loves, Jack must ally with those he needs, and the line between savior and monster has never been blurrier.

Fans of One Second After, The Hunger Games, and Alas Babylon should enjoy this what-if tale of inventiveness, character, and courage.

”A Post Apocalyptic Lord of the Flies that’s both terrifying and uplifting.”
– Nick Cole, author of CTRL-ALT-REVOLT, creator of Apocalypse Weird. 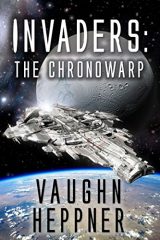 The Galactics quarantined Earth. But the last Galactic Guard agent died. Logan found his stealth ship, and now it’s his job to protect the Earth from alien predators.

Kazz is a genuine Neanderthal and Philemon is an apish proto-human, two thugs with priceless information to sell to the highest alien bidder. But first they have to get off this backward planet.

They hijack Logan’s Guard ship, needing it to crack an ancient alien structure at the bottom of the Arctic Ocean, believing it will provide them the ticket out of here. What they don’t know is that the structure holds a terrifying alien prisoner that could doom the human race to eternal servitude–if they did know, they wouldn’t care. Kazz and Philemon just want to cash in.

It’s up to Logan to stop them, but at the moment, he’s on the run from humans who want the secrets of the Guard ship. 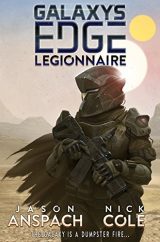 The galaxy is a dumpster fire.

A hot, stinking, dumpster fire. And most days I don’t know if the legionnaires are putting out the flames, or fanning them into an inferno.

A hostile force ambushes Victory Company during a reconnaissance-in-force deep inside enemy territory. Stranded behind enemy lines, a sergeant must lead a band of survivors against merciless insurgents on a deadly alien world somewhere along the galaxy’s edge. With no room for error, the Republic’s elite fighting force must struggle to survive under siege while waiting on a rescue that might never come.

When you think you’ve surrounded the Legion… you’ve just made your last mistake. 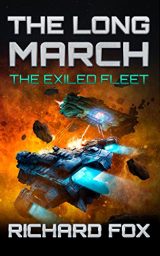 Commodore Thomas Gage and his fleet, safeguarding the last of the Albion Royal Family, are on the run. Hunting them, a ruthless Daegon commander will stop at nothing to crush Albion’s only remaining free force.

To find sanctuary beyond their enemy’s reach, the battle-damaged fleet must cut through a hostile and dangerous region of space known as the Kigeli Nebula. But to secure passage, Gage must strike a deal with an old enemy who wants nothing more than to fulfill a vendetta and see the commodore dead.

Facing threats ahead, behind and from within, Gage must lead his fleet down the Long March to freedom.

THE LONG MARCH is the second novel in an action-packed military space opera series by the best-selling author of the Ember War Saga and Iron Dragoons. 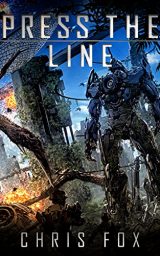 Imperalis has been lost. The Nameless Ones have returned. The Coalition refuses to fight, leaving the Ganog to wage a war they cannot win.

Betrayed and cut off, Khar and Zakanna struggle to survive. Nolan and Burke bring Alpha Company to reinforce the Nyar home world, only to be overwhelmed by the mighty Void Wraith Omegas. Fizgig and Takkar are captured by the sadistic Kthul fleet leader, Azatok.

Only one guttering flame of hope remains. On Nyar, Nolan finds an ancient Void Wraith Omega, weathered and damaged. If he can restore it, they might just have a weapon strong enough to fight back.