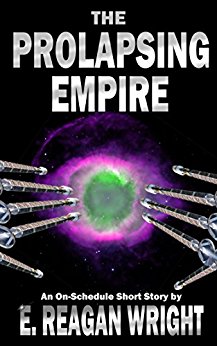 There had never been a more deserving Re-Scriber for a promotion to Chief Officer, Political. Doey’s years of slaving away in the Culture Mines finally paid off, and now he was one step closer to the tippy-top position of the Aynal Empire. His first mission as Chief Officer, Political, was a simple run through the low streets of the city to break up a clandestine culture mill churning out written works that weren’t derivative rehashes of previous greats carefully reworked to fit into this week’s Narrative.

At least it should have been. Only Doey’s astounding ability to justify victory in the face of overwhelming defeat could possibly see him through the events of his first thrilling and heroic day as the savior of a collapsing empire. Find out how in this thrilling 6,400 word story set in a distant future that bludgeons the reader with Terry Pratchett levels of subtle satire aimed straight at the heart of the most delusional sci-fi writer of our day, John Scalzi.