Previous entries in this light novel recommendation series have explored Tolkien’s primary and secondary worlds, with the aim of explaining the mechanics of isekai portal fantasies that take characters from the present and fling them into fantasy worlds. As a result, the selections have dealt with heroes from the primary world–our world. But self-contained and internally consistent fantasy worlds such as Westeros, Selenoth, Newhon, and Discworld have captured the imagination of readers around the world, and it comes as no surprise than Japan’s light novels have their own treasured adventures in such fantasy worlds. 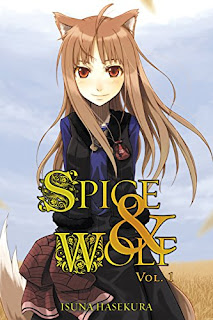 During his travels, merchant Kraft Lawrence comes across a village harvest festival centered around a wolf and wheat. Despite the enthusiasm of the celebration, the village treats these rituals as little more than superstition. Later on that night, Lawrence stumbles across the harvest goddess, Holo the Wisewolf, who makes a request of him, in her own maddening way. Progress and the church have pushed out the old ways, and Holo wishes to see her hometown in the North once more. Lawerence agrees, and as they journey north, the cunning Wisewolf helps him toward his own dream, earning enough money to settle down and open his own shop. To get to the North, they must navigate the intrigues of merchant houses, church politics, the occasional would-be suitor, and the growing May-December bond between a mortal man and an immortal goddess.

Occasionally nicknamed “Wolf and Economics” for the deep dives into medieval trade deals, Isuna Hasekura’s Spice & Wolf is a long courtship between Kraft Lawrence and Holo the Wisewolf. Contrary to early American marketing attempts, Spice & Wolf is not a fanservice book, as the romance is driven by poignant character interaction and not Holo’s state of undress. Unlike most light novel romances, not only is marriage the intended resolution, but the romance is full of more than just the give and take of Holo’s teasing. Over the course of their journey to Holo’s hometown, Lawrence and Holo’s growing trust in each other is tested, broken, rewarded, and reconciled as Lawrence attempts one audacious sales deal after another. Amazingly for the genre, some of the obstacles in Lawrence and Holo’s path stem not from the looming threat of the church, but out of their reluctance to wed. Unfortunately, the 2000s distrust of organized religion that filled many Japanese anime, manga, and games is present, simmering as wary caution instead of outright hostility. Fortunately, Lawrence’s sales broker schemes are quiet duels of wit and resolve, buoyed by Holo’s cunning, instead of academic accounting exercises. As a result, the travelling merchant has been a role more and more light novel heroes have adopted in their adventures. 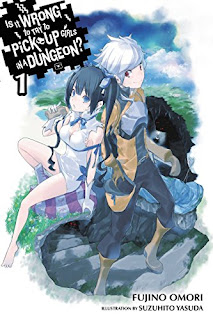 Never let marketers name books. Contrary to the expectations of the genre, Fujino Omori’s Is It Wrong to Try to Pick Up Girls in a Dungeon? is not a harem story, regardless of the marketing team’s efforts to frame it as such. Rather than the adventures of a rake, Bell Crandell decides to be an adventurer but has to get rescued when he gets in over his head exploring the city’s dungeon. He crushes on his rescuer, the renowned Sword Princess Aiz Wallenstein, and the puppy love drives him to become a hero worthy of fighting by her side. Along the way, Bell’s determination, growing skill, and an entire warren of rabbits’ worth of luck draw fellow adventurers to the familia of his patroness goddess, Hestia. But the city’s dungeon holds ever-growing dangers for adventurers, and Bell’s grandfather might have placed a heavy responsibility on Bell’s shoulders. 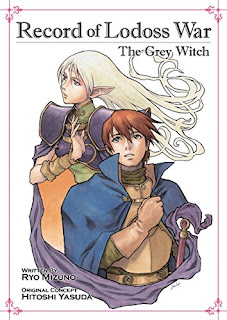 Instead of notable mentions, this week brings two classic light novels that continue to shape fiction and even gaming to this day.

Ryo Mizuno’s Record of Lodoss War may have started as a transcript of 1980s Dungeons & Dragons tabletop RPG sessions by Japanese game designers, but it quickly became one of the foundational fantasies for the light novel market, popularizing Western-style fantasy in Japan. Like the Dragon Quest games, it set many of the conventions of future fantasy–including the fascination with the trappings of Western fantasy. What Lord of the Rings is to the portrayal of elves in English language fiction, so too is Record of Lodoss War to elves in Japan. Up until recently, these stories were only available in English through the anime series and manga. However, like Legend of the Galactic Heroes and other light novel classics, the English publication of Record of Lodoss War was overshadowed by the glut in isekai portal fantasies. However, this epic fantasy is highly regarded, and worth seeking out.

Hajime Kanzaka’s Slayers, on the other hand, takes a comedic approach to sword and sorcery. Sorceress Lina Inverse hunts treasure, and, in truth, she’s not too different from the bandits she charbroils with her magic to get that treasure. Yet this carefree sorceress finds herself a constant pawn in the intrigues between gods and demons. The levity of the humor is balanced by the world-shaking scope of the events and the tactically sound magic battles. Fans of the classic anime will find a few familiar faces missing, but the dim yet strangely perceptive swordsman Gourry is Lina’s constant companion. English volumes of Slayers are difficult to come by, thanks to the 2000s manga contraction nearly bankrupting the publisher. Hopefully, with the newly announced third series of Slayers soon hitting Japanese shelves, Slayers may be rereleased in English. Until then, Amazon and used book stores are your best bet to find these books.