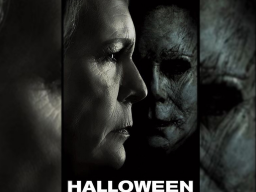 I’m assuming you’ve seen at least one episode of Scooby Doo. (If you haven’t, the hell are you doing here?) In every episode, there’s a scene something like this:

Scooby Doo comes out dressed to the nines in a tuxedo. He sashays over to the monster the gang has been running from and dumps a bouquet of flowers in its arms, along with a giant card that says “First Place Winner!” Shaggy, standing behind a vintage 1919 “still uses flash powder” camera, says “Say cheese!” and sticks his head under the cloth. He takes the pic. The flash explodes. The monster is blinded and starts rubbing his eyes. Flowers go everywhere. Scooby and Shaggy run off, ditching their costumes along the way, safely making their escape.

In every episode, the duo somehow embarrass the monster. Which is fine. The monster should be kind of ridiculous: it’s a comic children’s cartoon, not a hardcore horror flick.

Halloween is a hardcore horror flick that came out this Friday. It’s a retcon of the entire franchise, presenting itself as the sole sequel to the 40-year-old original. All the expected elements are present: there’s a Michael Myers, he gets put on a bus to be transferred to another prison, he gets loose, and people get dead.

Up until the last 20 minutes, the new Halloween is a pretty good horror flick. It’s well directed, shot, and cast. Over several scenes the director establishes that Michael Myers is ruthless, cruel, and unstoppable. He’s basically a Terminator, though even LESS human, if you can believe that. By never showing his face, and never speaking, Myers is never humanized, thus remaining a faceless and inhuman killer.

The director clearly put a lot of thought into the requisite killings. Each scene is unique, with its own unique feel, and each tells a different story.

The director succeeds in each instance, the scenes having the desired emotional impact. They propel the movie towards the inevitable confrontation between Myers and Laurie Strode (Jamie Lee Curtis), the one survivor of his original killing spree 40 years ago.

Like Sarah Connors in Terminator 2: Judgment Day, Strode’s been preparing for this confrontation all her life. Her house is a fortress, and her basement an armory. She’s spent countless years shooting at targets in the woods, and is well prepared for the inevitable confrontation.

And then the movie goes off the rails. Halloween SHOULD have ended in a Terminator-style nail biter, with Laurie finding out that all her preparation hasn’t been enough, that her fortress isn’t impregnable and that her armory isn’t sufficient, and that Myers is unstoppable and she is vulnerable: her greatest fear for forty years, fully realized. Myers should have chased her and terrorized her and battered aside any and all obstacles she threw up and brushed off any and all attacks she made until—at the very last second, exhausted, bloody, and brutalized—she barely eked out a victory. This ending would have showcased Myers’ nearly superhuman toughness and persistence, and Strode’s mental resilience and cunning, which enabled her to, once again, barely defeat the ultimate serial killer. As in the earlier scene, her terror at the situation could have drawn us in and made us afraid for her, and her victory would thus have been exhilarating for us.

Instead, we get a Scooby Doo: Strode plays Myers for a chump. She shoots off his fingers, instantly reducing him from a remorseless Terminator to a merely human intruder, vulnerable to merely human attacks, completely undermining the aura of invulnerability and menace the movie spent so much time establishing. Later he throws her off the roof, and when he goes out to look for her body, she’s disappeared (reversing the traditional scene).

The movie even flips the original film’s iconic shot, where Laurie is in full light to the left, and Myers barely seen in the shadows to the right, sneaking up on his intended victim. Instead, Myers is in full light on the left, Laurie stalking him from the shadows to the right. In that moment, Michael Myers, the ultimate superhuman serial killer, becomes the slasher’s victim, bleeding and confused, while Strode is transformed into a superhuman slasher, moving in for the kill.

A MONSTER THAT IS WEAKER THAN THE VICTIM IS NO THREAT AT ALL. And victory over such a weakling is no victory at all.

By “flipping the script” the director robs the climax of all tension, of all impact, and of all thrills. He destroys the horror of the horror movie.

The climax makes Myers into a Scooby Doo scary man, which is to say, not a very scary man at all.