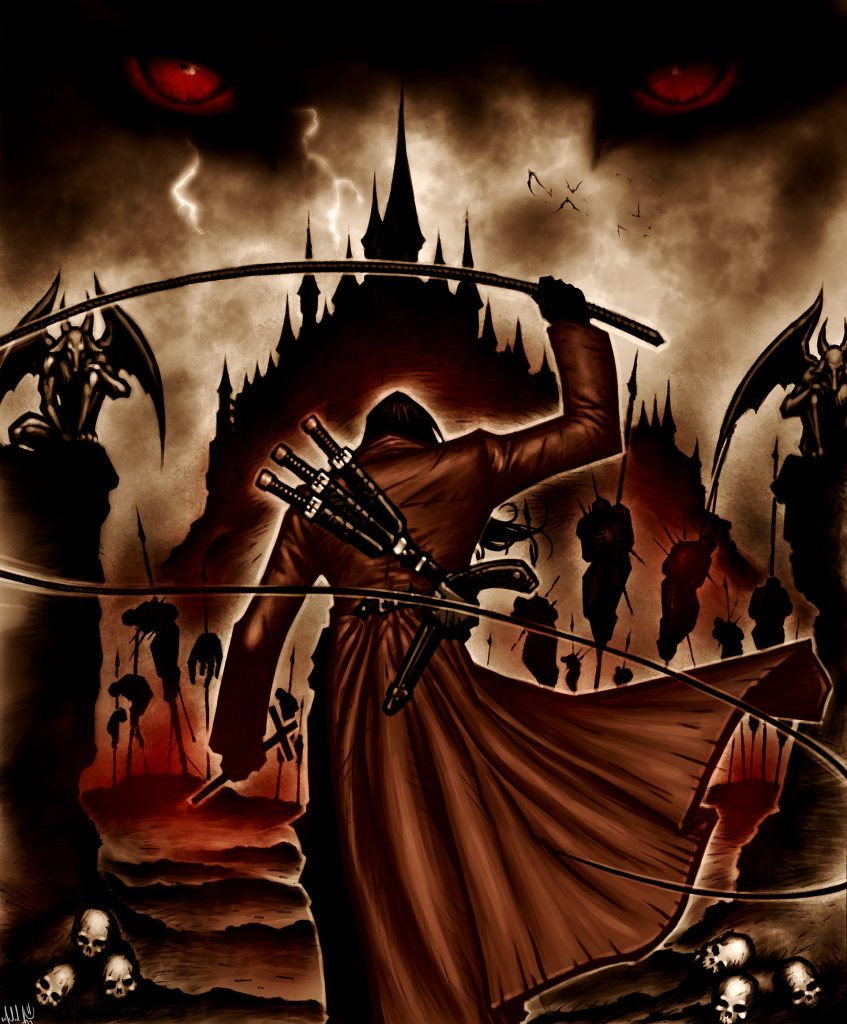 As I was reading Jasyn’s outstanding review of The Last Jedi, I kept thinking how much it applied to another 2017 production I watched last week.  Namely, the Netflix-produced miniseries of Castlevania.  For those unfamiliar with the property, it’s a series of video games, beginning in 1987 and continuing to the present, which follow a simple premise.  You play a hero who goes through Dracula’s castle fighting various monsters, from Medusa Heads to Frankenstein’s Monster to Death himself, before finally encountering and slaying the king of vampires.  While the protagonists have evolved over the past three decades from members of the Belmont clan to Dracula’s son Alucard to a random tattooed witch, and the weapons have changed from the Vampire Killer whip to swords, hammers, and even grenade launchers, the core concept remains the same.  Kill a bunch of monsters, then kill Dracula.  (Yes, I’m aware there are a few games, like Lament of Innocence or Dawn of Sorrow, where you don’t ever technically fight Dracula)

Castlevania is my favorite video game series of all time, but I wasn’t excited about a planned series, and not only because I suspected Hollywood would fuck it up.  In terms of story, Castlevania is as banal as it gets.  You could not, for instance, write an interesting book based on the franchise.  There are simply not enough ideas there.  However, I believe it’s possible to make a good television series or movie from it, as that medium doesn’t require nearly as much depth as the written word. Two strengths of the games can carry over to film; the cool characters and awesome set pieces.

There is a problem, though.  Modern Hollywood fails pitifully at manly, heroic characters, and they have gotten increasingly lazy with set pieces.

Which brings us to the series itself.  It takes place in the late 1400s, following the events of Castlevania III interspersed with Alucard’s backstory revealed in Symphony of the Night.

It begins with Lisa, a peasant girl trying to learn about medicine, waltzing straight into Dracula’s castle.  When Dracula threatens her, she shows zero fear, and dresses down Dracula for not showing proper courtesy to a guest.  Dracula is taken aback and proceeds to do everything she tells him to, like a properly repentant boy.

Yep.  Three minutes in, and the main, terrifying villain, lord of demons and monsters, has been emasculated and is being ordered around by an ordinary country girl.  In exchange for this feminist bullshit, the mighty Dracula is robbed of all menace and mystery, vital characteristics of a villain.

However, contrary to expectations culled from three decades of the franchise, Dracula isn’t actually the main villain in the series.  Oh no, THAT would be Christianity.

It’s a bloodthirsty, insane Catholic priest who decides to burn Lisa alive, precipitating Dracula’s vengeance against the region of Wallachia in Romania.  It’s the Catholic Church that purposely keeps the villagers poor, ignorant, and miserable.  It’s the Church that employs a bunch of cartoonishly evil, ugly thugs to murder peaceful old men in the streets.  It’s the Church that the main hero, Trevor Belmont, is mainly fighting against, not the forces of Dracula.

It’s impossible to understate how vindictive, vile, and hysterical the decision by Warren Ellis to cast Christianity as the main evil in the series is.  (And this, coming from a non-Christian)  Moreover, it’s nothing more than a bunch of ahistorical lies.

As the excellent Brian Niemeier noted on an episode of Geek Gab, Wallachia wasn’t even under the authority of the Catholic Church then, but rather, the Eastern Orthodox Church!  While I hadn’t realized that, I still thought how imbecilic it was for the Catholic Church to have military power in rural Romania at a period of time when their strength was waning and they were struggling to hold onto their Papal States in Italy.

And if you’re wondering if there is anything like this in the game series, the answer is no.  In Symphony of the Night, it’s revealed that Lisa is burned as a witch, but no church is ever implicated.  While rarely touching upon religion directly, the portrayal of Christianity is generally positive throughout the series.  Crosses and Holy Water are classic weapons from the first game, and later on in the series, rotating Bibles.  Priests have also aided the player several times, with Castlevania II: Simon’s Quest and Portrait of Ruin both coming to mind.  Yoko and Sypha (more on her later), both playable characters in the series, are Christians fighting on behalf of the Catholic Church.

Thus, in addition to being repulsive by itself, being virulently anti-Christian is not something that Castlevania ever was.

In another pure invention of the Netflix production, the Catholic Church is responsible for taking the lands of the Belmont clan and driving them from home, further evidence of their evil.  According to official Konami materials in 2006, it was the Pope who called on the Belmont clan to fight Dracula in 1476 after the Eastern Orthodox forces had failed to subdue him, the precise opposite of the series. Which brings us back to the characters and how miserably the series fails at them. 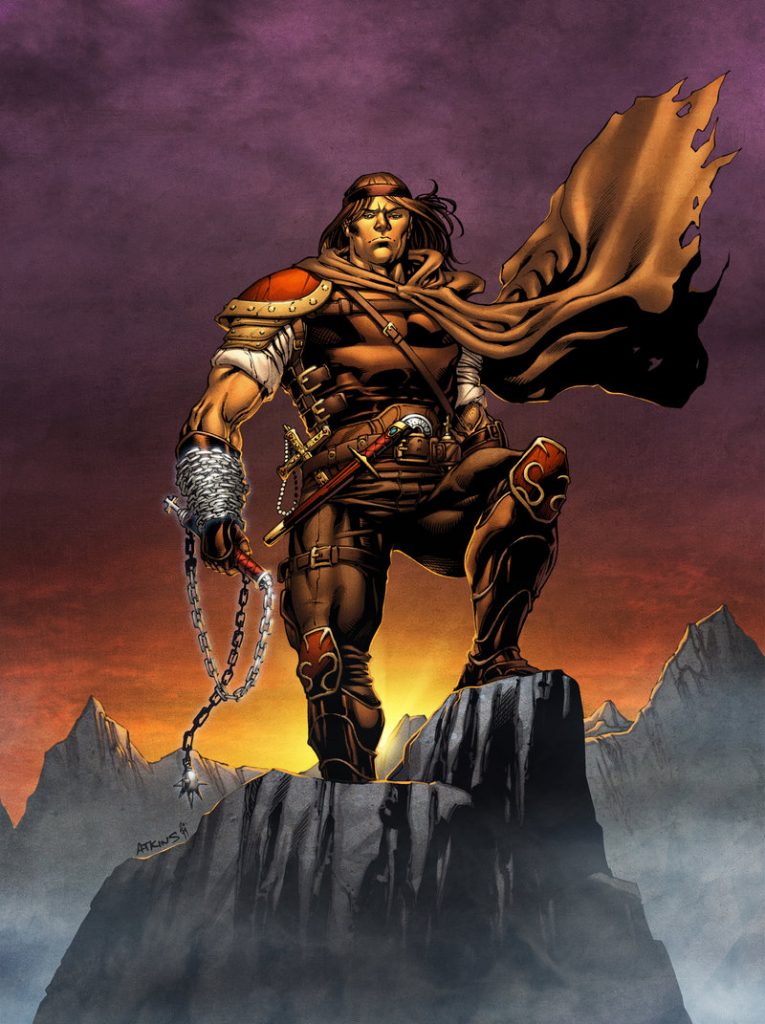 Trevor Belmont, the legendary warrior who was the first of his clan to fight and kill Dracula (or at least since Leon and Sonia were retconned) is depicted as a sullen, aimless drunk who has no desire to help anyone and gets coerced into doing so with great reluctance.  Now, a reluctant hero can work in the right hands, but there is simply nothing heroic or admirable about Trevor at any point in the four episodes.  He is petulant and morose, with the explanation for this being thoroughly unconvincing.  Yes, the Church took his lands, but he still wears nice clothes, has an array of weapons, and plenty of money.  Him being resigned to his fate is not the behavior of any hero, reluctant or otherwise, but of a loser.

This lack of heroism applies to his physical abilities, too.  It’s stated many times throughout the series that the Belmont line is far more powerful than ordinary humans.  Their physical strength, speed, and endurance is comparable to a comic superhero, and they can easily kill a regular human with a single blow.  Which makes perfect sense.  How the hell could a Belmont hope to defeat an army of supernatural monsters otherwise, when a few Lizardmen, Bone Dragons, or Axe Armors could ravage an entire village?  And yet, Trevor is no larger or stronger than a random villager he fights at a local bar. His only advantage is that he is more skilled when sober.

Amusingly, despite all the Social Justice with the feminism and hatred of Christianity, the series fails as putridly with the female hero of Castlevania III, Sypha Belnades.  In the game, she is a magic caster (ergo, her power is not derived from physical strength, as it is for the male characters) and thanks and helps Trevor on his quest after he saves her by defeating the Cyclops boss.  Their ending also implies a further romantic relationship between the two.

In the series, she is the granddaughter of the head of the Speakers, a multiracial collection of vagabond cultists.  (Because why the hell wouldn’t there be random black guys in Romania in the 15th century, you goddamn racist?!)  Naturally, the Speakers are genuinely good, holy, and non-violent, and persecuted by the evil Christians.  This is already a huge misstep.

See, Sypha in the game was a brave adventurer fighting Dracula’s forces as part of a monastic order.  By instead making her part of a pacifist group led by her grandfather, they rob Sypha of heroism and agency.  She is just a child following around a grandparent who only fights due to circumstance, not a bold protagonist making a conscious decision to risk her life against Dracula’s hordes.

But of course, it gets worse.  Far from being thankful when Trevor saves her in the series, Sypha is angry and bitter towards him.  And then tries to order him around.  (Hey, it worked for Lisa with Dracula!)  This is more feminism (a woman can’t ever be vulnerable or thankful towards a man), and the cost this time is transforming a likable female protagonist into a shrill, odious, harpy cunt.

So we’ve established that the Netflix series has an ugly, off-putting hatred of Christianity, a love of feminism, idiotic race virtue signaling, destroys everything cool about the characters, and spits on all things masculine and heroic.  It might seem besides the point, but what about those set pieces?

Lazy and uninspired, as expected.  With all the fascinating weapons, armor, locations, and monsters in the Castlevania games, it’s pathetic how little they do with them.  The climactic fight in the fourth and final episode between Alucard and Trevor is especially bad, as there are noticeably few frames of animation being used.  As a result, it looks choppy and disjointed.  The conclusion also sucks, but you likely already guessed that.  Instead of Trevor defeating Alucard, as in the game, (Alucard was testing Trevor’s strength) they’re in a stalemate which is broken up by Sypha, after which Alucard shrugs and joins them.  Lame.

On a technical and choreography level, the fights look worse than some anime I’ve seen from the late 90s, let alone the early 2000s.  Seriously, go watch 1997’s Berserk and note how much more dynamic, fluid, and inventive the combat there is.

There is also a lot of useless, imbecilic talking in each episode, as opposed to an emphasis on action.  (Social Justice trumps entertainment, after all!)  As with The Last Jedi, the pacing is terrible.

Notably missing from the Netflix series is Grant Danasty, the fourth playable character in Castlevania III besides Trevor, Alucard, and Sypha.  Grant is an awesome dagger-throwing pirate who can climb walls, an utterly unique ability throughout the games. His omission might be excusable if they couldn’t work him into the story, but consider all the superfluous bullshit they added instead.  The Speakers.  Demonization of Christianity.  A village peasant talking about fucking goats.  It’s obvious where the priorities of these troglodyte “creatives” are.

Whether intentionally or not, despite the vilification of the Church, there is a group worse than them.  The villagers.  At one point, a town mob is trying to kill Trevor, spurred on by accusations by those evil Christians.  However, after Trevor says a few words accusing a Church leader of malfeasance, those same villagers turn right around and murder a man of the cloth with repeated, merciless stabs of their knives and pitchforks.  That’s right; the people are such maniacal, murderous madmen that they go from allying with X and trying to kill Y to allying with Y and killing X in the span of a minute and a few generic words.

Perhaps this is how Hollywood feels about the common man shining through.  Perhaps this is pure incompetence.  Regardless, this makes it impossible to care about a single villager, and effectively eliminates the stakes of the series.  If the villagers are this awful, who cares if Dracula’s hell-spawns rip their throats out and feast on the carcasses?

Netflix’s Castlevania is a shoddy, boring series infused with the worst, most idiotic nihlism and Social Justice that spits on heroism, Christianity, and anything else positive.

And yet, this also brings us to an interesting question.  I despised this production with every ounce of my being.  Brian Niemeier hated it, too, despite wisely only watching the first episode.  However, the majority of people like the series, judging by ratings and reviews on IMDB and elsewhere.  What gives?  My guess is that these folks are simply used to the awful garbage of today.  Netflix’s Castlevania, sadly, does not stand out as an anomaly in 2017.  Ergo, most either ignore, accept, or actively enjoy what I’ve noted above.