Namibia and Get Jiro 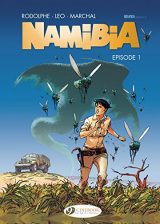 At the end of the 1940s, photos emerge of Hermann Göring alive and well in Namibia. Fearing that her once Allies have stabbed her in the back, Great Britain sends secret agent Kathy Austin to Africa to investigate. She attempts to track down the photographer, but finds him murdered, along with several informants. Kathy tracks down the site where the photographs were taken. Along the way, she finds vast swarms of oversized insects and prematurely aged people. But when Göring collapses into dust in front of her, the mysteries of Namibia deepen.

In this first volume, author Luiz Eduardo de Oliveira (Léo) and illustrator Bertand Marchal set the stage for an encounter with Léo’s favorite topic of alien encounters. Beautifully drawn with vivid blues and golds, the art is marred by Kathy’s all-too-common confusion of unpleasantness with strength. Her constant one-upmanship with her guide, who thinks Namibia is too hard a land for anyone, much less a woman, not only strips Kathy of the sympathy Léo tries to build for her, it robs the thin volume of space needed to develop the mystery and the wonder hidden in the African countryside. 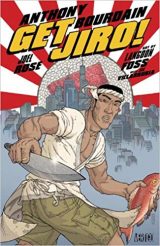 Anthony Bourdain’s Get Jiro! drops a humble sushi chef into the culinary heart of a Los Angeles riven by rival gangs of chefs. On one side, the professional globalists who blend and chop and fuse dishes from many cultures together without regard for tradition, and on the other, hippy locovores who insist that only local ingredients be eaten and only in season–or else. Jiro must navigate this glutton’s Hell, where men can be killed for ordering a California roll or serving tomato caprese in January. But when the globalists and the locovores set their eyes on Jiro, he has a chance to end the tyranny of the gangs and strike a blow for the simple love of food.

At first glance, the story does appear ridiculous, but Bourdain wraps what is essentially the culinary fight of the 2000s in cyberpunk aesthetic, punk attitude, and samurai movie excess–blood geysers, body counts, and all. And the sheer ridiculousness of the Blood and Crips being replaced by corporate suits and hippie hayseeds keeps the pretentiousness out of what is essentially a three-way fight for control over what people eat, and as always with such battles, a shocking disrespect for the people. Bourdain and Jiro’s love for simple food with the best flavor shines through the page, but the entrenched combat between the gangs can only be settled in blood. For those not wrapped up in the inside baseball of the culinary world, Bourdain relies on exaggeration, caricature, and style to carry the average reader through this revenge tale. Here, vegans are truly the Hezbollah that Bourdain labelled them as in Kitchen Confidential, with a body count to match. Unfortunately, much of Jiro’s tale relies on the reader being a fan of celebrity chefs. If you’ve lost time to the Food Network, the Travel Channel, or any of a host of eating and cooking shows, try Get Jiro!. Otherwise, those seeking a splash of flavor with their comic books should instead try Bourdain’s Hungry Ghosts.